2 July 2013 (Moscow)⎯The Best Innovator competition launched in Russia for the second year in a row. The Skolkovo Institute of Science and Technology (Skoltech) will co-sponsor the event hosted by global management consulting firm A.T. Kearney. Other co-sponsors include the New Economic School, RVC, and media partners RIA Novosti and Forbes Magazine.

The Best Innovator competition has been held internationally by A.T. Kearney since 2003. Known in Russia as “Innovator 2013/2014”, the competition invites companies throughout Russia to participate by submitting an application from July 2 to August 30, 2013, at www.bestinnovator.com. Participants not only have the chance to be recognized as leading innovators in their country but also receive an array of insights and findings, helping them to improve their innovation practices, generate growth, and improve competitiveness by looking at innovations from an all-encompassing perspective. This approach includes innovation strategy, innovation-based business organization, corporate culture, life-cycle management techniques, and the creation of favorable conditions for the business.

“Innovation management is at the core of today’s top management business tasks, especially, when it comes to Russia as a resource-rich country that is still struggling with manufacturing and marketing attractive value-add products,” says Dr. Kai Engel, a partner and managing director at A.T. Kearney for Germany and for the firm’s global innovation and R&D management competence team. “Superior Innovation Management of the global Best Innovators led to over proportional exceptionally value growth—up to 100 % in approximately 7 years. In order to grow GDP sustainably in Russia, Innovation Management Excellence has to be developed as a core capability broadly among corporations.”

Russian companies that participate in Best Innovator 2013/2014 will be in excellent company. Winners of Russia’s first Best Innovator competition in 2012-2013 included ROSATOM State Corporation, Sberbank, Zeptolab, RIA Novosti News Agency, and the Speech Technology Center. Past winners around the world include Siemens, Philips, GlaxoSmithKline, BASF, Schlumberger, 3M, Audi, Intel, BMW Group, Henkel, and Enel.
“We are proud to launch the Best Innovator Russia competition for the second time now,” says Soeren Grabowski, a principal with A.T. Kearney and leader of the Communications, Media & Technology Practice in Russia and the CIS. “The success of the first round last year showed that there is a clear demand for investigating the key success factors for innovations in Russia—beyond all marketing gimmicks—to shed light for others to follow.”

Companies operating in Russia are invited to participate in the contest. Selecting the winners for Best Innovator 2013/2014 consists of several stages to ensure rigor in the candidate selection process and jury impartiality. In the first stage, the judges assess the applicants’ innovation management against the quality and quantity parameters specified in the questionnaire found at http://www.bestinnovator.com. Next, A.T. Kearney consultants meet with each of the finalist companies, conduct interviews with their top managers, and make their final assessment of the applicants’ innovation competence. Finally, the panel of judges selects the winners.

The official award ceremony and public announcement of the winners will be held in December and will be covered by the media. Each finalist will receive individual feedback containing an analysis of the judges’ assessments.

Leading Russian executives and other experts recognized for driving innovation in Russia, including winners of Best Innovator 2012/2013, comprise the judging panel. Every member has been chosen for his or her knowledge of innovation and integrity to ensure an impartial and effective judging process: 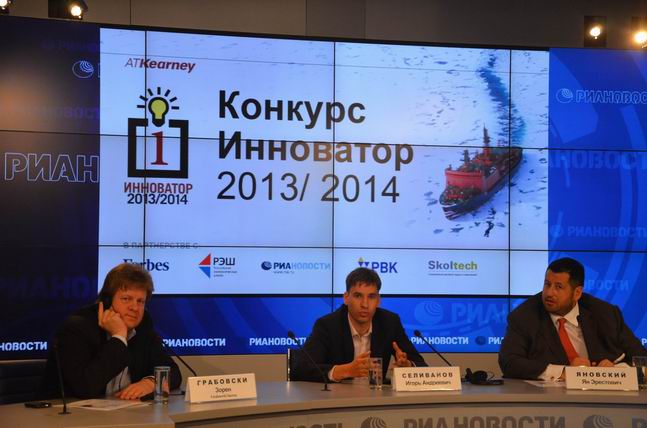 Last year, the “Innovator 2012/2013” competition in Russia was enthusiastically received by the contestants, the judging panel, and the public. The Best Innovator Russia award ceremony was held on December 11 at Petrovsky Palace, Moscow. The ceremony speakers announced the winners and delivered the judges’ key conclusions about companies that successfully introduce innovations to the Russian market.

A total of five awards were granted:

“I consider the Best Innovator 2013/2014 a very timely initiative. Adjustment of the state economic model is always a very complicated process characterized by considerable inertia. Recently, the Russian President Vladimir Putin confirmed the need to shift from the raw material-based development model to the innovation-based one. However, to succeed in it, it is necessary to engage all economic agents in the process and ensure strong demand for high-technology products and management innovations in the market. This contest makes a certain contribution to this complex process,” says Anna Belova, vice dean of Higher School of Management National Research University “Higher School of Economics” and a member of the judging panel.

“Innovation companies are struggling because it is not enough to create new products and services; they should be developed in [such a] way that customers would want them and the audience would express a lasting and growing interest in them. Creating a good-looking and attractive thing is not sufficient: It is necessary to constantly engage in its development, modification, and adaptation to future conditions.
“This is why it was especially important for RIA Novosti to participate in the Best Innovator contest to compare our own assessment of the company’s innovativeness with the assessment of independent experts. The fact that we became one of the winners just proved that we are on the right track,” says Svetlana Mironyuk, editor-in-chief at RIA Novosti.