In 1958, the US satellite mission Explorer 1 made the first—and one of the most significant—discoveries of the space age: space is radioactive. Further US and Soviet missions revealed an entire outer belt of radiation that proves harmful to humans and satellites in space.

This model held for over five decades, portraying the Van Allen radiation belts as two donut-shaped belts, with the outer one encompassing the inner belt.

In February, however, using data from NASA’s Van Allen Probes, a team of scientists led by Skoltech Professor Yuri Shprits observed what would prove to debunk this belief and open new opportunities for protecting satellites and understanding the environment outside our atmosphere.

“I believe that, with this study, we’ve uncovered the tip of the iceberg. We found a new population of electrons that is driven by very different physical processes. We still need to fully understand how these electrons are accelerated, from where they originate and how their dynamics vary for different storms. This physical understanding will be most important in developing models of the near–Earth space environment and for protecting Earth-orbiting satellites from harmful radiation,” said Professor Yuri Shprits, an Associate Professor at the Skolkovo Institute of Science and Technology (Skoltech) and affiliated with the University of California Los Angeles (UCLA). 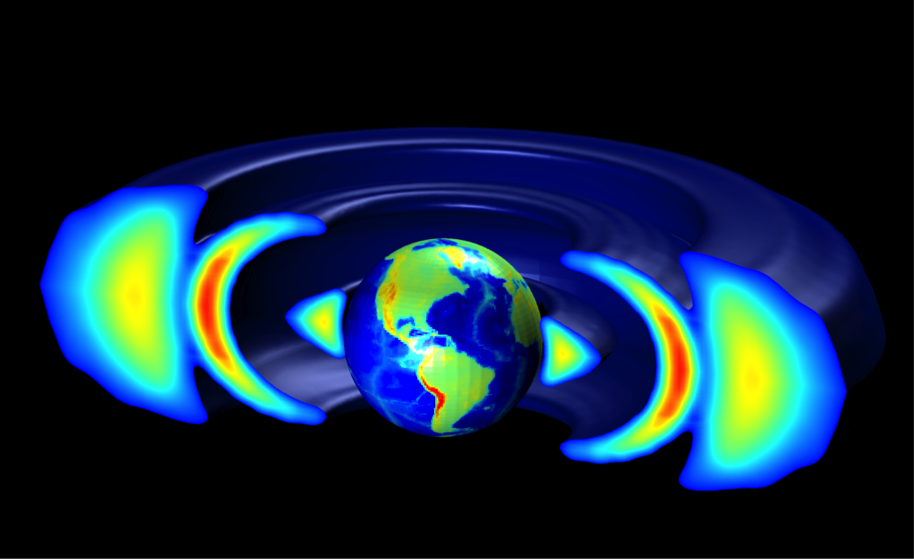 In new research, published on September 22 in Nature Physics, the researchers formulated a computer model accurately matching observations by the Van Allen Probes. Using this model, they went on to explain how the ring is formed and why it can persist for such a long time.

“Ultra-relativistic particles move very fast and cannot be at the right frequency with waves when they are close to the equatorial plane. This is the main reason the acceleration and scattering into the atmosphere of ultra-relativistic electrons by these waves is less efficient,” says Ksenia Orlova, a graduate of Moscow State University and currently a UCLA postdoctoral scholar in Shprits’ group.

The electrons observed by the probes reach such enormous energies that they are driven by a completely different set of physical processes than commonly observed in the outer Van Allen belt.

“These particles are the most energetic and can penetrate through shielding of the most well-protected and valuable satellites in space,” said Professor Shprits.

NASA launched the Radiation Belt Space Probes (later renamed the Van Allen Probes) on August 30, 2012 as part of a mission to better understand the dynamics of harmful radiation. The research group used the subsequent data to prove what they had been modeling for some time.

“We have seen some of the remnant belts in our simulations for quite some time, but we thought that there was simply something missing in the model. In the past, we were never sure that we could completely trust the observations. Previous measurements of electrons were often contaminated by protons and responded to particles at different energies. The data from the Van Allen Probes gave us confidence that measurements were reliable, and permitted us to clearly separate effect of electrons from ions,” said Yuri Shprits.

The Van Allen Probes were equipped with very accurate instruments that can measure different particles ranging from relatively cold to extremely energetic and that move at approximately 0.999 of the speed of light (billions of degrees of Kelvin). With this advanced technology, the probes permitted researchers to study the belts as a whole coupled system.

Soon, the probes’ measurements had revealed one of the most unusual configurations of radiation in space seen thus far (Baker et al., 2013, Science). They detected that at very high energies, a narrow (fraction of Earth’s radii) ring of radiation persisted in the near-Earth space environment for over 4 weeks.
“When I started my PhD, we didn’t even look at such energetic particles as we were not sure that we could trust mere observations. Now we have a remarkable agreement between our model and observations, both encompassing a wide range of energies,” says Dmitriy Subbotin a graduate of Moscow State University and a former UCLA graduate student of Prof. Shprits.

The team performed simulations with a model of the Earth’s radiation belts for the period from late August 2012 to early October 2012. The simulation, conducted using the physics of ultra-relativistic electrons and space weather conditions monitored by ground stations, matched the observations from NASA’s Van Allen Probes mission, confirming the team’s theory about the new ring.

The research team also includes UCLA postdoctoral scholar Alexander Drozdov, who works with Van Allen Probes observations; Kyung-Chan Kim a researcher from Korea who recently finished his postdoctoral studies at UCLA; UCLA assistant researcher Drew Turner, who provided data; researcher Maria E. Usanova of Canada’s University of Alberta, who provided critical observations of electromagnetic pulsations from the Canadian Space Agency-funded CARISMA ground network of magnetometers; and Daniel Baker a director of the Laboratory of the Atmospheric and Space Physics at the University of Colorado, who provided expertise on the analysis of data from the Van Allen Probes.