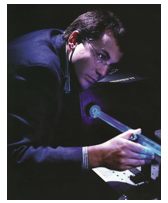 SEMINAR ABSTRACT:
Optoelectronic technologies rely ubiquitously on semiconductor materials that are used to transport electric charges (fermions) and absorb or emit photons (bosons). Inorganic crystalline semiconductors are characterized by high charge transfer efficiency, whereas organic semiconductors and colloidal nanocrystals are characterized by their brightness and large absorption cross-section. Recent advances in the field of Hybrid Photonics enable devices that utilize the best of both worlds offering improved energy efficiency in LEDs and PVs. Furthermore, engineering new light-matter states in photonic semiconductor architectures allows us to discard altogether the need for charges (fermions) and replace with bosonic quasiparticles that couple more efficiently to light and offer a new paradigm for novel, low power lasers and quantum technologies.

SPEAKER INTRODUCTION:
Pavlos Lagoudakis is Professor of Physics at the University of Southampton. He moved to the UK in 2006 from LMU, Munich, and setup a new experimental research activity on Hybrid Photonics. In 2008, he was appointed to a personal chair at the School of Physics and Astronomy. In 2011, he became chairman of the University’s Nanoscience Research Strategy Group. In 2012, he was elected head of the Solid State and Photonics Division (Quantum Light Matter group) and in 2013 deputy head for research at the department of Physics and Astronomy. His work in hybrid photonics includes the first demonstration of hybrid LED and PV devices utilizing resonance energy transfer, a patented mechanism now adapted by relevant industries (LUXTALTEK, TSMC). For his contribution in the field of polaritonics and hybrid photonics he obtained the IUPAP award on Quantum Electronics (Sydney 2011).