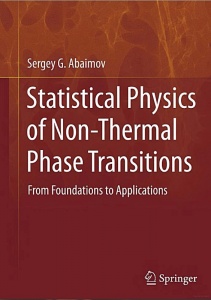 Sergey Abaimov’s book “Statistical Physics of Non-Thermal Phase Transitions” addresses the question how we can build analogies between statistical physics and such phenomena as earthquakes, snow-avalanches and landslides, failure of engineering structures, and economical crises. Understanding of this question might allow us to develop techniques to prevent these catastrophes

A new monograph authored by Skoltech Senior Researcher Sergey Abaimov (Center for Design, Manufacturing and Materials) addresses the question of applicability of statistical physics to non-thermal complex systems and phenomena.

Statistical physics describes a wide variety of phenomena and systems when interaction forces may have different natures: mechanical, electromagnetic, strong nuclear, etc. The commonality that unites all these systems is that their belonging to statistical physics requires the presence of thermal fluctuations. In this sense these phenomena necessarily include the thermodynamic aspect.

Meanwhile, the second half of the last century may be named the time of the discovery of the so-called complex systems. These systems belong to mechanics of materials, chemistry, biology, ecology, geology, economics, social sciences, etc. and are generally united by the absence of concepts such as temperature or energy. Instead, their behavior is governed by stochastic laws of non-thermodynamic nature; and these systems can be called non-thermal. Nevertheless, in spite of this principal difference with statistical physics, it was discovered that behaviors of complex systems, such as stock-market crashes, revolutions in society and in science, fractures in engineered materials and in the Earth’s crust, catastrophes, traffic jams, self-organized criticality, and many others, resemble the behavior of thermodynamic systems. In particular, many of these systems possess a phase transition identical to critical or spinodal phenomena of statistical physics.

The application of the well-developed formalism of statistical physics to non-thermal complex systems may help to explain phenomena such as petroleum clusters, polymerization, DNA mechanism, informational processes, traffic jams, cellular automata, etc. Or, better, scientists might be able to predict and prevent catastrophes such as earthquakes, snow-avalanches and landslides, failure of engineering structures, economical crises, etc.

The monograph is devoted to the comparison of thermal and non-thermal systems. As an example of a thermodynamic system an Ising model is generally discussed while the considered non-thermal systems are represented by percolation and damage phenomena. Step-by-step, from the equation of state to the free energy potential, from correlations to the susceptibility, from the mean-field approach to the renormalization group, these systems are compared and it is found that not only are the rules of behavior similar but also, what is even more important, the methods of solution. The Reader will see that, developing the concept of susceptibility or building the renormalization group, although each time one begins with a particular system considered, the foundation of an approach is always based on the formalism of statistical physics and is, therefore, system independent.