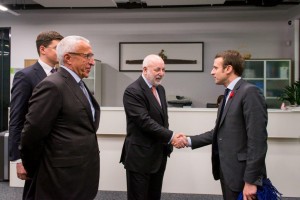 Mr. Emmanuel Macron, Minister of Economy, Industry and Digital Affairs of the French Republic (right), shaking hands with the President of the Skolkovo Foundation, Victor Vexelberg.

Mr. Emmanuel Macron, Minister of Economy, Industry and Digital Affairs of the French Republic, visited at Skoltech today, together with Russian Economic Development and Trade Minister Alexei Ulyukaev. During his visit he met with executives from the Skolkovo foundation, was introduced to local start-ups, and held a speech during the launch ceremony of the French Tech Hub in Skolkovo. Among others, the French minister was accompanied by Skoltech next president, Dr. Alexander Kuleshov and Alexei Sitnikov, Vice-President for Institutional and Resource Development. 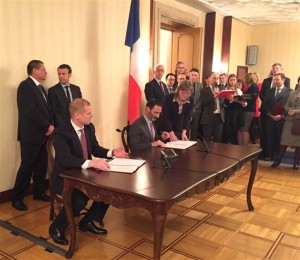 The agreement was signed by Nikolai Grachev, left, for Skolkovo, and Pierre de Firmas for EDF Group. Behind them, Alexei Ulyukaev, left, and his French counterpart Emmanuel Macron looked on.

Prior to the French minister’s visit, a cooperation agreement was signed between The Skolkovo Foundation and EDF, France’s largest state owned energy company. The agreement focuses on energy efficiency at industrial and urban sites and new methods for generating and consuming electricity, smart grids and smart cities, electricity storage and energy efficient electric transport.

“EDF … has proven practical experience of implementing energy efficiency projects in Russia,” said Nikolai Grachev, vice president of the Skolkovo Foundation and director of its energy-efficient technologies cluster, who signed the agreement on behalf of Skolkovo.

“This agreement will enable Skolkovo startups to offer their solutions to EDF Group. EDF’s experience and know-how will definitely be in high demand in our innovation ecosystem,” he said.

Minister Ulyukaev said the signing of the agreement was “especially important for the implementation of smart city and energy efficiency projects.”