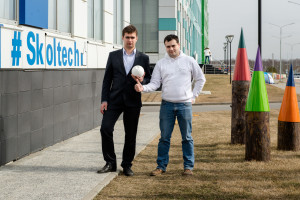 Skoltech’s Dmitry Suvorov (“Space Robotics” Laboratory) and Roman Zhukov (“Advanced manufacturing” Laboratory) have successfully performed at the international competition “The Global Happiness Technology Challenge”, held in the Science Park of Tsinghua University TusPark. Their Webot project was awarded as the best in the category “Robotics”. Webot is a telepresence robot that performs actions while being controlled from a distant location via computer and the Internet. It allows you to remotely observe what is happening and talk to people, see the world and quietly move at a speed of a person walking.

Immediately after the award ceremony, negotiations with Chinese companies about sponsorships, development and localization sales of Webot in China have started. To be precise – it was talk about the next sales, because the first Webot went to its Chinese customer right from the contest. 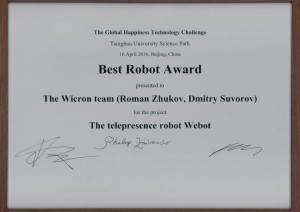 Along with Webot, another development of Suvorov and Zhukov – project “clever cot” – was shown in Tsinghua University. This project is on development within the framework of Skoltech’s translational research and innovation program (STRIP). This built-in monitoring system that allows to track status of the child, raised great interest among the Chinese hosts and they have already turned to the head of Skoltech robotics lab, prof. Dzmitry Tsetserukou with a proposal to work together in this direction.

In extent to assess the potential of development, Dmitry Suvorov and Roman Zhukov reached an agreement with Chinese partners about Webot promotion on local Chinese exhibitions. In addition, Dmitry and Roman were invited to meetings with potential Chinese industrial partners and investors, which will be held in the summer, with the financial support of Tsinghua University.