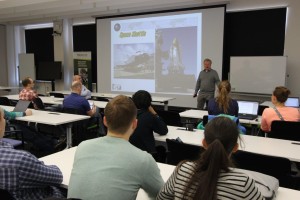 Cosmonauts day is celebrated in Skoltech’s Space Center in an appropriate manner – with a lecture from an astronaut. Prof. Rupert Gerzer invited his friend and colleague Dr. Reinhold Ewald to tell his students about international space stations, and to share from his personal knowledge and experience, which includes facing the thing that no astronaut want to encounter.

Ewald received a Bachelor of Science degree in Physics from the University of Cologne in 1977 and has a Master of Science in Experimental Physics in 1983. He graduated in 1986 with a PhD in Physics and a minor degree in human physiology. In 1990, he was selected to the German astronaut team, training for the Mir ’92 mission, and In February 1997 he flew to the space station Mir with Soyuz TM-25, spending 20 days in space. During his time in Mir, Ewald was part of the crew that confronted one of the worst case scenarios in space – fire in the spacecraft (Watch the televised report below). Currently Ewald promotes the scientific achievements of the ESA research program on the International Space Station, working at the European Astronaut Center in Cologne, Germany. On 1 September 2015 he was appointed as Professor for Astronautics and Space Stations at the Institute of Spaceflight System at University of Stuttgart on secondment from ESA.

Ewald’s lecture was titled “The making of ISS”. He started his lecture with description of different types of space vehicles, their advantages and disadvantages. For example, the soyuz was very reliable but it crash-landed. The shuttles, on the other hand, have a short operational time, but they give a much more pleasant landing experience.

After that he turned to speak about the International Space Station (ISS), mentioning that its building followed the principals of gradually adding the different modules, as presented by the Russian building of the MIR space station. He stressed that space station maintenance is not possible without international cooperation, and showed the contribution of Russia, USA, Europe, Canada and Japan to the station.

An interesting demonstration of the power of international cooperation was the story of the American space shuttle program. After the Columbia tragedy the shuttle program was suspended, and Ewald said that this was a good example of the power of international cooperation – if one side is unable to perform, the other side steps in. Eventually NASA returned the shuttles to service, for the sole purpose of completing the ISS construction. 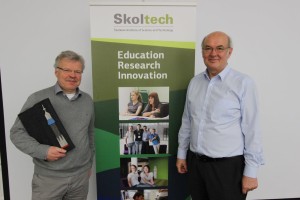 Toward the end, Ewald talked about the crew operations on board of the ISS. The first inhabitant of ISS was on October 2000, he mentioned, and ever since there’s human presence in space. Scientific researches on board it were possible since 2001. He described the way a mission is planned many months in advance and how the crew communicates with the ground crew. As a guest of Prof. Gerzer, who is an expert in aerospace medicine, the guest talked about the astronauts’ fitness, and how nowadays exercise on board is so advanced, that it counteracts the effects of weightlessness. One of the students asked how important is the human part, and the answer was “Have you seen the movie “Gravity”? No one watched it to see the robots operating, but to see Sandra Bullock and George Clooney operating. Humans are an essential element at the station”.

More interestingly, he told about his unique experience of dealing with fire on-board. When asked about the crew’s reaction to the fire he replied: “Every person has his task, and suddenly there is the hierarchy. The commander will give the order, and every member will do his part. For me it was reassuring that the others were doing their part and not panicking”. 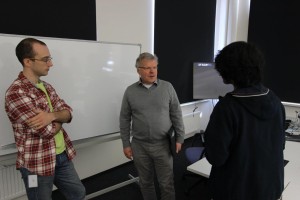 After the lecture Ewald stayed to speak with students and answer some more questions. When asked about comradery between astronauts he replied: “I’m part of an organization called “the association of space explorers” and the idea is that the look down on earth unites us all, whether it’s a Saudi prince or Belgian guy, or Russian. When you look down to earth you don’t see the borders. The association was formed to spread this message. By now three quarters of the astronauts in the world, cosmonauts and even the Chinese taikonaut, are members of the association. So, there is something that ties us together. It’s not an elitist organization. We go out to schools and universities and explain them this point of view”.

To the Students of Skoltech Space Center he gives the next advice: “it’s good to do practical things, to see how space flight is done, the whole chain. In order to not end up in surprise, you really need to see how powerful space flight can be, what forces are there. Launching this rocket into space takes brute force. I know, I’ve seen it from the side and I sat on it”.