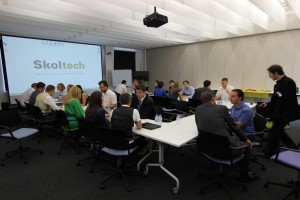 Skoltech hosted today a delegation from the Netherlands for a round-table event, organized by the Skolkovo foundation. The purpose of the event was to start building up a bilateral Russian-Dutch network of universities, innovation hubs, industrial partners and governmental bodies who want and need to co-operate to promote innovative entrepreneurship and bridge the gap between academy and industry. 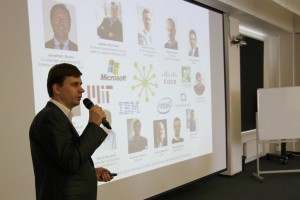 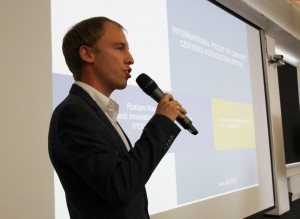 The event started with presentation given by Skoltech team members of the Center for Entrepreneurship and Innovation. Licensing and Technology Transfer Manager Sergey Ulyakhin presented Skoltech Translational Research and Innovation Program (STRIP), and Innovation Program Specialist Rustam Kagirov presented IPoCA – International Proof-of-Concept Association. After them there were presentations of the Skolkovo foundation and the Technopark, Skolkovo Open University and Moscow Technological University.

Hein Roelfsema from the University of Utrecht presented the Dutch efforts to overcome the 2007 crisis, and the plan for academic entrepreneurship ‘Valorisation of Knowledge’. His mapping of the key Dutch players in each sector (business, education, startup) was followed by Tatiana Sazonova from Philips, who gave a presentation about her company’s Open Innovations approach. At Skoltech we already enjoyed this approach at a course given by prof. Zeljko Tekic, who also participated in today’s round table.

The event ended with a University matchmaking: just as in speed dating, all the participants sat around the table (which was actually not round, but in the shape of the Cyrillic letter П) from both sides. As soon as the organizers rang the Dutch cowbell, the participants moved to the seat next to them, to meet another possible match.