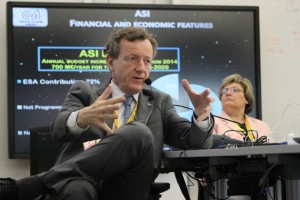 Prof. Roberto Battiston, the president of the Italian Space Agency.

How much do you know about the Italian space program? Here are some facts: Italy is the third largest spacefaring country in Europe and very active in all areas of the space program. 60% of the International Space Station has been built in Turin. The country was the third in history after the Soviet Union and the United States to independently launch a satellite to space (San Marco mission) in 1964. It is now producing its own launch vehicle, satellite platforms, and space services that are being deployed worldwide, and with a strong collaboration history with Russia.

The major part of the lecture was dedicated to Earth Observation, which takes the largest share of ASI’s funds. Prof. Battiston talked about the differences between optical imagery satellites and radar imagery satellites, putting the emphasis on the latter. 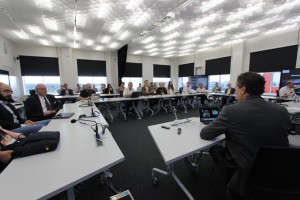 He explained in a detailed manner how monitoring Earth from space can be useful and economic in various areas: emergencies management; ocean and ice monitoring; coastlines and inland waters monitoring; forestry and agricultural monitoring and management; urban planning; scientific applications and security applications.

Another point that was presented in the lecture regarded the frequency of mapping sessions. The given example was Italy, which is mapped by satellites several times a day. The ambitious idea that Prof. Battiston presented was a continuous 24/7 radar imagery coverage and mapping by a fixed satellite.

At the end, the audience were given the opportunity to ask questions, and the first one was “where do you store all this data?”. “The problem is not the storage of the data, but to find clever things to do with this data”, replied Prof. Battiston, “The issue is to find a good idea. Ideas you cannot buy. For new ideas we need people like you which are working together. The real challenge is making an infrastructure which can use those data, making wealth and market in Europe, not only in the United States. Otherwise we are producing the data and someone else is making value out of it. If there is a hope we can do something about that, it’s exactly by people like you, mixing together IT, physics, earth observation, satellite and having an idea what to do with that. I think it’s fantastic, but we must quickly walk in this direction”.