Skoltech academic year is intense and demanding. The summer time is when our students (and faculty) can relax a little bit, go on vacation and recharge their batteries for the next intense and demanding year, be it at home with the family, on the beach, or maybe on a top of a mountain.

Skoltech Space Master’s student Raffaele Gradini, is spending his summer in California, USA, as an intern in a NASA facility. We asked him to tell us about his experience there.

Where are you exactly, which NASA facility? 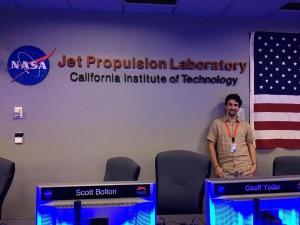 I am currently at the Jet Propulsion Laboratory, known also as JPL. This is one of the ten NASA facilities around the United States and is placed in Pasadena, California. With more than 5000 employees, JPL is a unique center, because it is a NASA facility, which is also managed by Caltech; this makes it more open to foreigners and to academics, adding much scientific value. For this specific reason, the control room from which all the scientific robotic missions that NASA has launched from the 1970s is located here.

What do you do there?

I mainly work in section 352N, part of the Planetary Protection department. Our goal is to assure that Terrestrial biological matter does not contaminate the celestial body target of the mission. At the same time, we study ways to prevent back-contamination for when a sample returns from a mission, such as with the Mars Sample Return. The motto of the department is: All of the planets, all of the time.  We want to be certain that each planet, including Earth, keeps its own uncontaminated biosphere. Additionally, I will soon start working in the System Engineering section during my free time. There I will be part of a team of engineers, which studies and evaluates different architectures for those missions that JPL is proposing to NASA. Among all the missions, which are now under study, I will most likely work on those directed to the icy moons of the solar system.

How is it connected to your research at Skoltech? 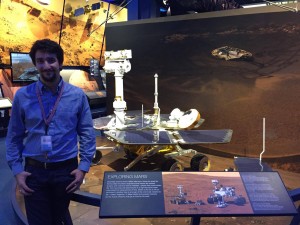 In Skoltech I am a student in the Space Systems Architecture and Spacecraft (payload) engineering track working very closely with the Strategic and Innovation Research Group, led by Prof. Alessandro Golkar, who, together with all the other people in the group helped me a lot. During the year, I have been doing research on planetary protection policies and regulation with Skoltech’s new provost Prof. Rupert Gerzer. At the end of March, as I had great interest in the topic, I had asked him about the possibility of doing my thesis on the subject but with a special focus on regulations and two sterilization techniques: Vapor Hydrogen Peroxide and Gamma Irradiation.  Concerning the new opportunity I have found here, I do believe that I will gain the maximum from this experience that Skoltech is offering me. For this reason, I will be working in the System Engineering section: to apply what I have learned in Prof. Golkar’s class while working with some of the best engineers in the world.

Can you describe some cool experiences from your internship?

The coolest thing I have done here so far is visiting the Mission Control Center. They call it the center of the universe, but even if it’s obviously not… I wish one day I could be in that room, being part of the team that lands a spacecraft on a celestial body millions of miles away from the Earth. That is probably one of the few places in the world where history was written more than once. Aside from that, the view from my office is also gorgeous and quite unique, at least on this planet. In front of my window, I have the so-called “Mars yard” where daily I see the engineers driving huge rovers on red hills simulating issues and problems, which may happen on Mars. The even cooler part of this is that those are usually real mock-ups which are nearly identical to those which are on currently on the red planet.

What can you take from this experience back to Skoltech?

What I have always believed is that our world needs to be a better place and that academics can contribute to this by moving knowledge from one side of the world to the other. From my experience, I wish to bring back my growing network in order to create more possibilities for Skoltech’s future students to come here.
In a more practical sense, I know that Prof. Gerzer is starting a new project on food safety and indoor production, and I hope to bring my contribution to the project in order to achieve the desired success. Furthermore, I also hope that my experience in the System Engineering section will be also useful for the SIRG group; as they have helped me a lot during the past year, I hope that my time here will allow me to be more useful to them as well.

What do you want to do in the future, and how this takes you closer to it?

Honestly, I know what I would like my future to be in the long term, but deciding which of the many paths I have in front of me right now is extremely hard. I know that one day I would like to become the chief engineer of a whole interplanetary mission, and I know that in the mean time I would like to work as a system engineer for a space agency. I hope the time spent here will help me in growing my own network as well as in choosing which path to follow to achieve my dreams. In the near future I am thinking about applying to pursue a PhD… where is yet to be decided.

All photos courtesy of Raffaele Gradini.