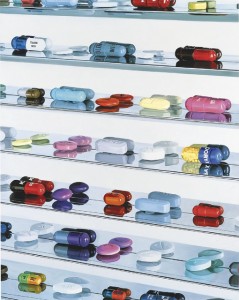 Endothelins are the most potent endogenous peptides constricting blood vessels. Since they were discovered in the end of 80th pharmaceutical companies started a race to produce endothelin antagonists as the drugs to reduce blood pressure. However, there was no immediate success despite huge money spent by several big Pharma concerns. Serious animal studies were required, which progressed in parallel in the academic labs. It occurred that the signaling by endothelin peptides is very complex. There are two types of endothelin receptors, type A (ETA) and type B (ETB). While activation of ETA receptor causes vasoconstriction, activation of ETB receptor can cause vasodilation (or relaxation) of the vessel wall through the mechanism involving NO release (the active substance release by a simple drug nitroglycerol). At the end of 90th the new technology of conditional knockouts made it possible to inactivate specific genes selectively in different cell types. So scientists started investigate specific role of ET receptors on different tissues. These investigations were in parallel with the development of new ET antagonists. Since then very effective drugs based on ETA antagosists appeared and are in practical use for treatment of pulmonary hypertension, a very serious condition in man.

The current paper in the journal Hypertension is in continuation of the studies on endothelin receptors knockouts. It occurred that blockade of ETB receptor in smooth muscle cell does very little to proliferation of these cells after the vessel injury. The experimental procedure involved injury of the vessel wall of the artery in the leg of the mouse, processes similar to what happens during atherosclerotic damage of the vessel.

Yuri Kotelevtsev, Skoltech professor, Associate Director of Skoltech Center for Functional Genomics: “We actually expected that the knock out effect might be the other way around. And there were good predictions for that. But the experiment showed no significant role of ETB receptors in smooth muscle cell proliferation. This is definitely a new knowledge, which potentially may save lots of money and effort, just advising not to do something, for example, ETB antagonist based anti atherosclerotic drug. However, a couple of studies will be required to be absolutely sure about it. This is the nature of the true research, which is a tedious and meticulous process.“

The results of the study were published in the journal Hypertension.