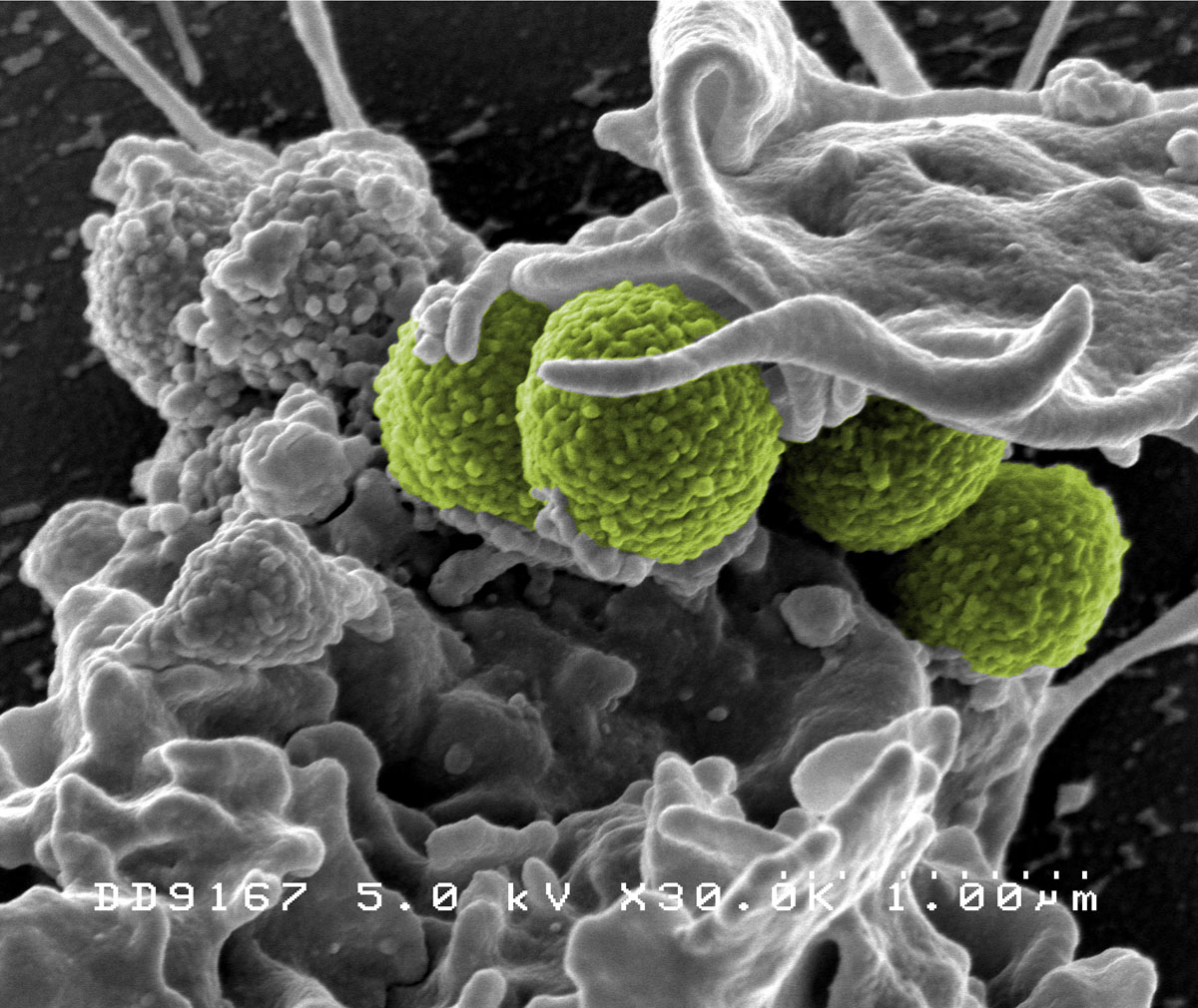 The spread of a drug-resistant form of Methicillin-resistant Staphylococcus aureus (MRSA; pictured above) has captured headlines in recent years, exacerbating fears of an antimicrobial-resistance crisis. Photo: NIAID/NIH.

In the absence of massive global action, drug-resistant infections will surge in the coming years, claiming the lives of some 10 million people annually by 2050, according to the Review on Antimicrobial Resistance (RAR).

In fact, the World Health Organization (WHO) ranks antibiotic resistance as one of the most significant threats to global health, food security and development.

Over the course of the past several decades, the proliferation of antibiotics has boosted life expectancies worldwide, making it possible to cure once life-threatening maladies with just a few pills, as well as to carry out complex surgeries formerly fraught with the risk of infection.

Consequently, a drug-resistance crisis could reanimate the bleak reality that a cough or a scratch on the knee could be a death sentence.

At present, some 700,000 lives are lost each year to drug-resistant infections, the RAR reported, noting that this figure was likely an underestimate due to inadequate reporting and monitoring standards in many countries. In addition to a spiraling death toll, the RAR estimates that cumulative antimicrobial-resistance healthcare costs could reach 100 trillion USD by 2050.

Startling though these figures may be, experts agree that it would be premature to abandon hope; there’s still time to change course.

We caught up with Professor Konstantin Severinov – an antibiotic resistance expert and Director of Skoltech’s Center for Data-Intensive Biomedicine and Biotechnology – to learn more about antimicrobial resistance and humanity’s best shot at averting a full-blown crisis. 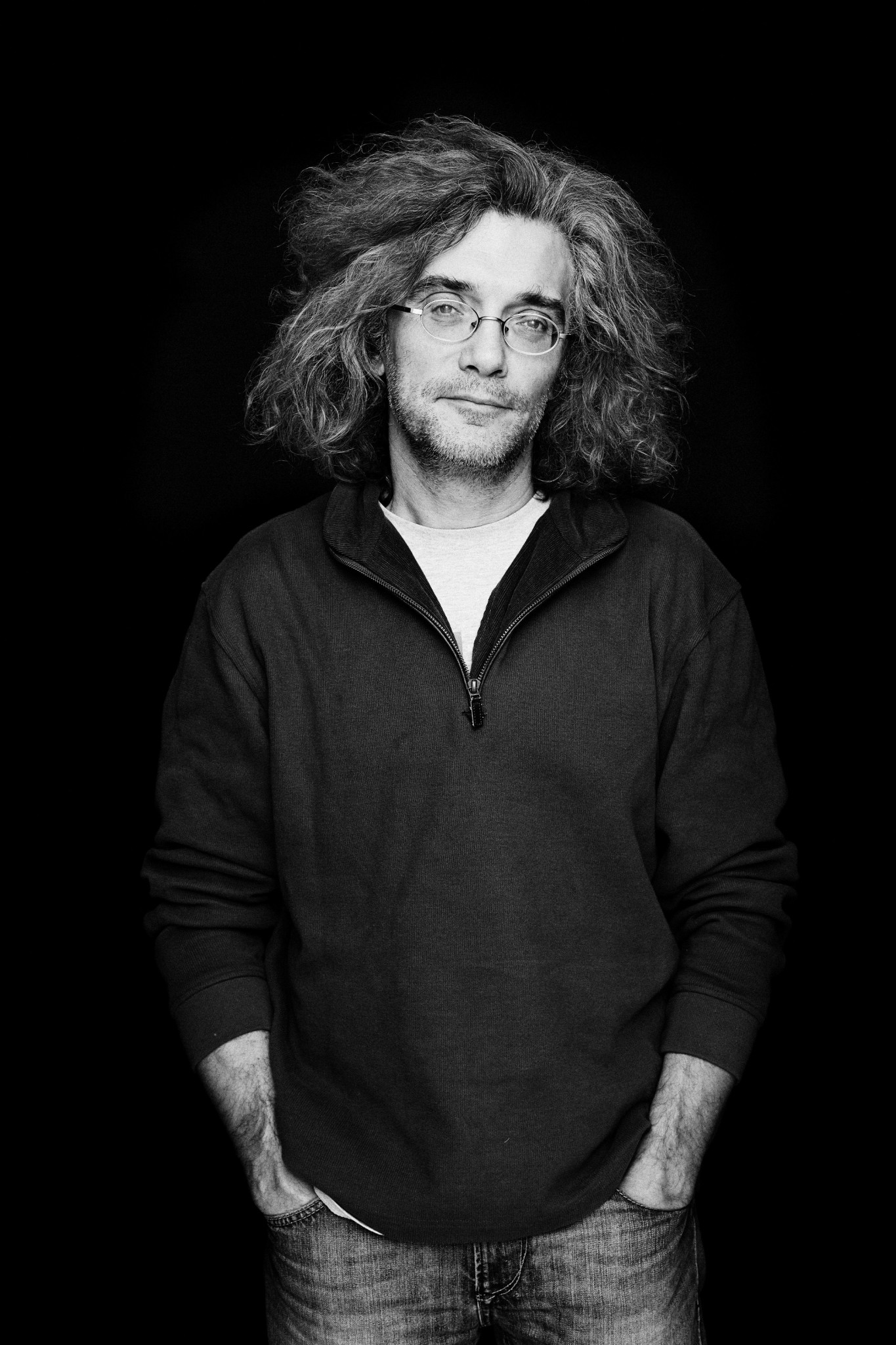 The rise of antimicrobial drugs

Bacteriology scholar Alexander Fleming stumbled upon the first modern antibiotic in 1928 when a Petri dish in his laboratory containing staphylococcal bacteria became infested with mold. Upon closer inspection, he realized that there were no staphylococcal bacteria in the direct vicinity of the mold; something in the mold was inhibiting bacterial growth. He was able to isolate the element of the mold that was responsible for this phenomenon, and ultimately to mass produce it in the form of penicillin.

Prior to the advent of antibiotics, everyday life was treacherous – a reality made painfully clear with a glimpse at maternal, childhood and infant mortality statistics from centuries past.

In Great Britain between 1860 and 2000, infant mortality rates tumbled from about 150 per 1,000 live births to less than 10, according to historical data site A Vision of Britain Through Time. Between 1850 and 1970, maternal mortality rates in England and Wales sank from about 55 per 1,000 births to less than 10, the Journal of the Royal Society of Medicine reported.

In the early 20th century in some U.S. cities, up to 30% of babies died before their first birthdays, according to a U.S. Center of Disease Control (CDC) report, while six to nine of every 1,000 women died as a result of childbirth according to another set of CDC statistics. During the 20th century, the maternal mortality rate in the country fell by some 90%, while the infant mortality rate nosedived from 165 to seven per 1,000 births.

Along with other medical advances, Fleming’s accidental discovery and the subsequent development and spread of antimicrobial drugs were largely responsible for these improved figures.

“Some of the infections [that commonly claimed the lives of infants and children in centuries past] were caused by viruses that we can now largely control by vaccination, and all of the most common bacterial infections can now be controlled with antibiotics,” Severinov said.

“In a way, the modern lifestyle is very much because of antibiotics and vaccines; these were game changers,” he said. 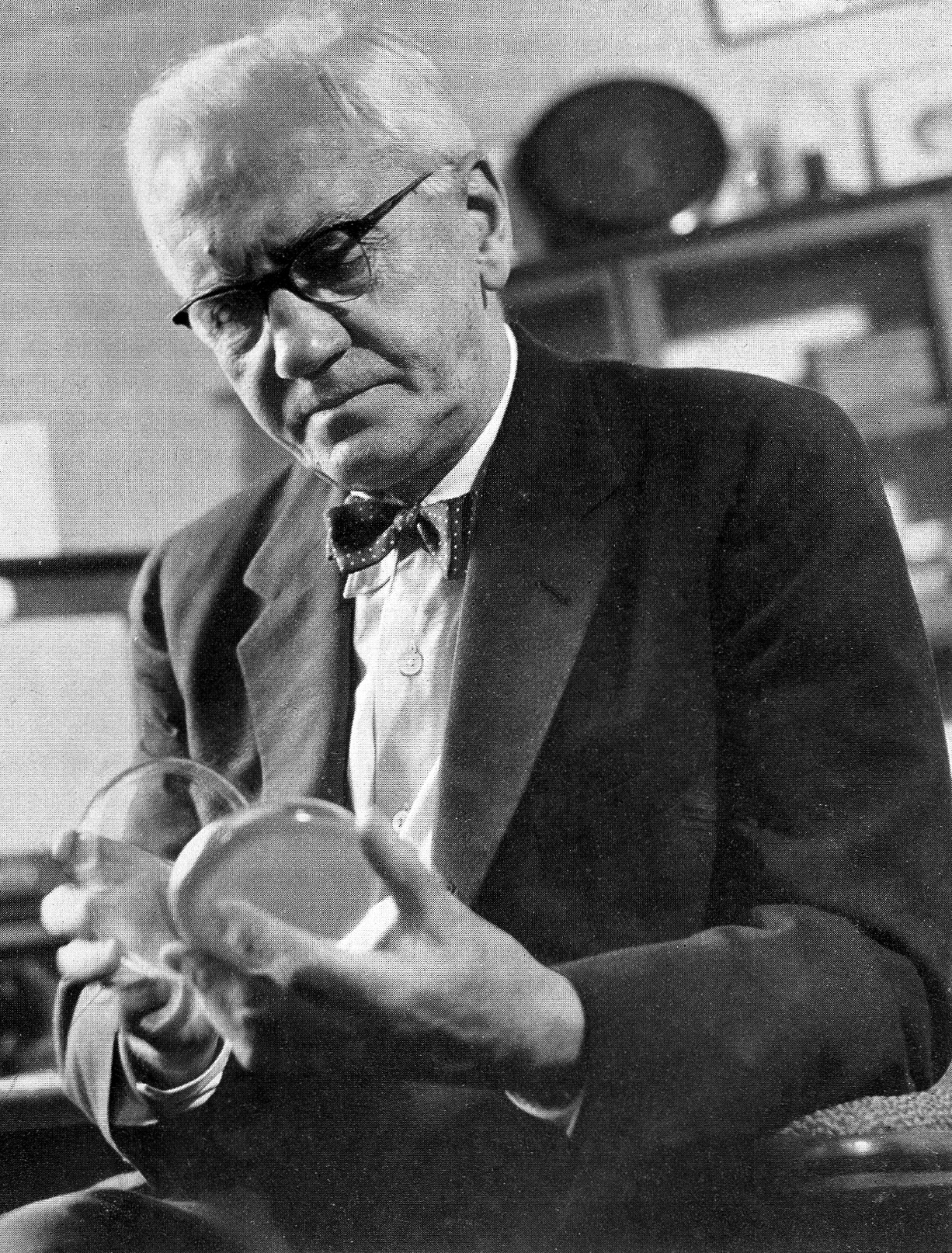 The microbes fight back

Antimicrobial resistance boils down to the survival of the fittest.

When an antibiotic is administered to treat an infection, the most sensitive among the infection-causing bacteria will succumb to the drug, while those that are even slightly resistant stand a chance of surviving. Ultimately these survivors spawn more bacteria, subsequent generations of which will share the genetic trait that equipped their predecessors to endure antibiotic attacks. The level of resistance will also have a tendency to increase in time if an antibiotic is constantly present. Before long, most bacteria become insensitive to an antibiotic that had previously been highly effective against the microbes in the starting population.

According to the WHO: “New resistance mechanisms are emerging and spreading globally, threatening our ability to treat common infectious diseases. A growing list of infections – such as pneumonia, tuberculosis, blood poisoning and gonorrhea – are becoming harder, and sometimes impossible, to treat as antibiotics become less effective. Where antibiotics can be bought for human or animal use without a prescription, the emergence and spread of resistance is made worse.”

The WHO went on to warn that if we as a global community don’t act fast, we’re doomed to wind up in what it termed the post-antibiotic era – the likes of which so many of our ancestors failed to survive.

A German hospital ward treating casualties of an 1892 cholera outbreak. In modern times, antibiotics are commonly used to treat the severity and duration of cholera. Photo: Public domain.

“Starting around the late 19th century, humanity decided that it would wage war against microbes,” Severinov said of the years following the discovery of the germ theory of disease, which holds that microbes were to blame for many human illnesses.

“The idea that we have to fight and win against the microbes nowadays looks misguided and even silly,” Severinov continued. “But of course back then nobody realized how important microbes were for the world, and for us, and how numerous they are.”

Researchers estimate that each of us contain trillions of bacterial cells – comparable to or even surpassing the number of human cells in a given individual, as reported by the American Microbiome Institute, citing a study conducted by the Weizmann Institute of Science in Israel.

“There’s no way we can win,” said Severinov.

Instead, the professor explained, our relationship with microbes should be viewed as more of a state of coexistence. “The microbiome – the community of microbes that live within us – define many of our functions, including, some people think, our psyche to an extent,” he said, referring to a growing body of research that links gut function to mental health.

He stressed that moving from warfare to coexistence isn’t as simple as accepting some microbes as good while continuing to vilify others.

“The idea that there are good and bad microbes is equally folly, because it all depends on circumstances,” Severinov said, explaining that immune deficiencies brought on by illness and the aging process heighten an individual’s susceptibility to microbial infections.

“Most of the microbes that cause problems in hospitals – so-called opportunistic microbes – are not professional pathogens. They aren’t plague or cholera microbes. They’re just ‘normal’ microbes that live on and in and around us and are very common and usually don’t cause any problem. But if conditions go wrong they can cause incurable infections,” he said.

He added that the overuse of some of the most commonly deployed weapons in humanity’s antimicrobial arsenal – antibacterial soaps and gels – can actually increase an individual’s likelihood of picking up microbes that will cause an adverse reaction: “If you get rid of the normal microflora on your skin, it might be replaced with something else, which could be bad.” 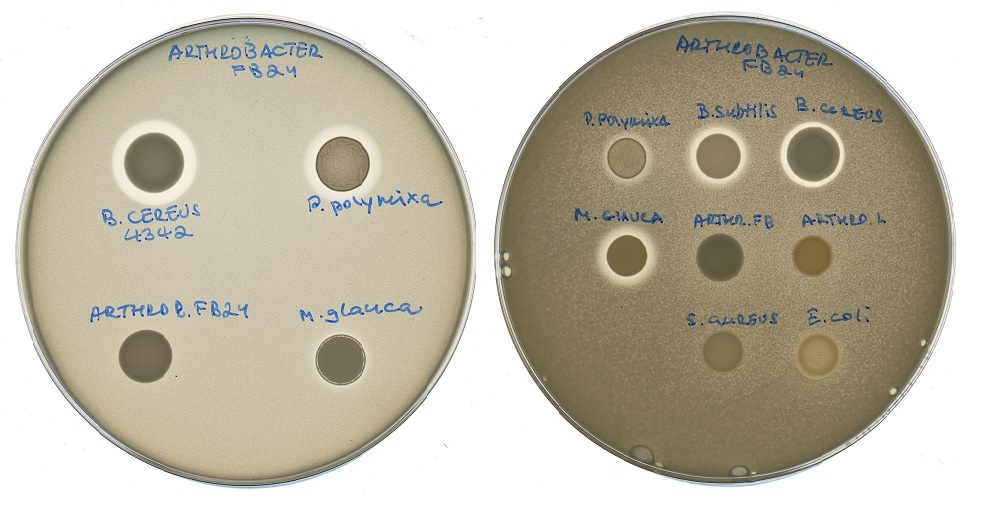 Petri dishes exhibiting bacterial reactions to different types of antibiotics. The inhibition of bacterial growth can be observed in the halos surrounding some of the antibiotics. Photo: Svetlana Dubiley // Skoltech Center for Data-Intensive Biomedicine and Biotechnology.

How to avert a global crisis

If the liberal use of antimicrobial medications and cleansing products can’t save us, what can? According to Severinov, hope lies in the discovery of new antibiotics and the improvement, whenever possible, of old ones.

And daunting though it may sound, finding new antibiotics can actually be child’s play.

“Looking for drugs is great fun, because you’re literally like a little kid looking for new things, and the variety out there is huge,” Severinov said.

Much in the same way that Fleming discovered antimicrobial mold by mistake, microbes with the capacity to inhibit bacterial growth can exist anywhere, and finding them is less a question of skill than it is of breadth and good fortune.

“The thing is there are so many microbes, they’re so diverse, and none of us is smarter than the others, so finding a new drug is almost like a matter of luck, and the more people are engaged in this, the higher the chances will be,” he said.

In the United States, the Howard Hughes Medical Institute has relied on this logic to launch a program called Phage Hunters, which mobilizes thousands of university students each year to search their local areas for bacteriophages – viruses that kill bacteria, and which were once considered to be a possible alternative to antibiotics. Upon isolating bacteriophages, the students annotate their genomes and then submit the annotated sequences to a national database.

In Severinov’s view, a similar model could be implemented in any country to cover more ground in our search for new antibiotics. His sights are set on launching a similar operation for Russian high school students in the coming year.

Beyond discovering new antibiotics, Severinov says that there’s reason for us to be optimistic despite the unnerving antibiotic resistance statistics.

“It’s still true that despite the looming crisis, which may or may not materialize, most antibiotics that the great scientists and industrialists of the 1950s and 1960s developed still do work, or they may require some relatively minor modifications and then they can start to work again,” he said. “So far, we’re still on the winning side.”