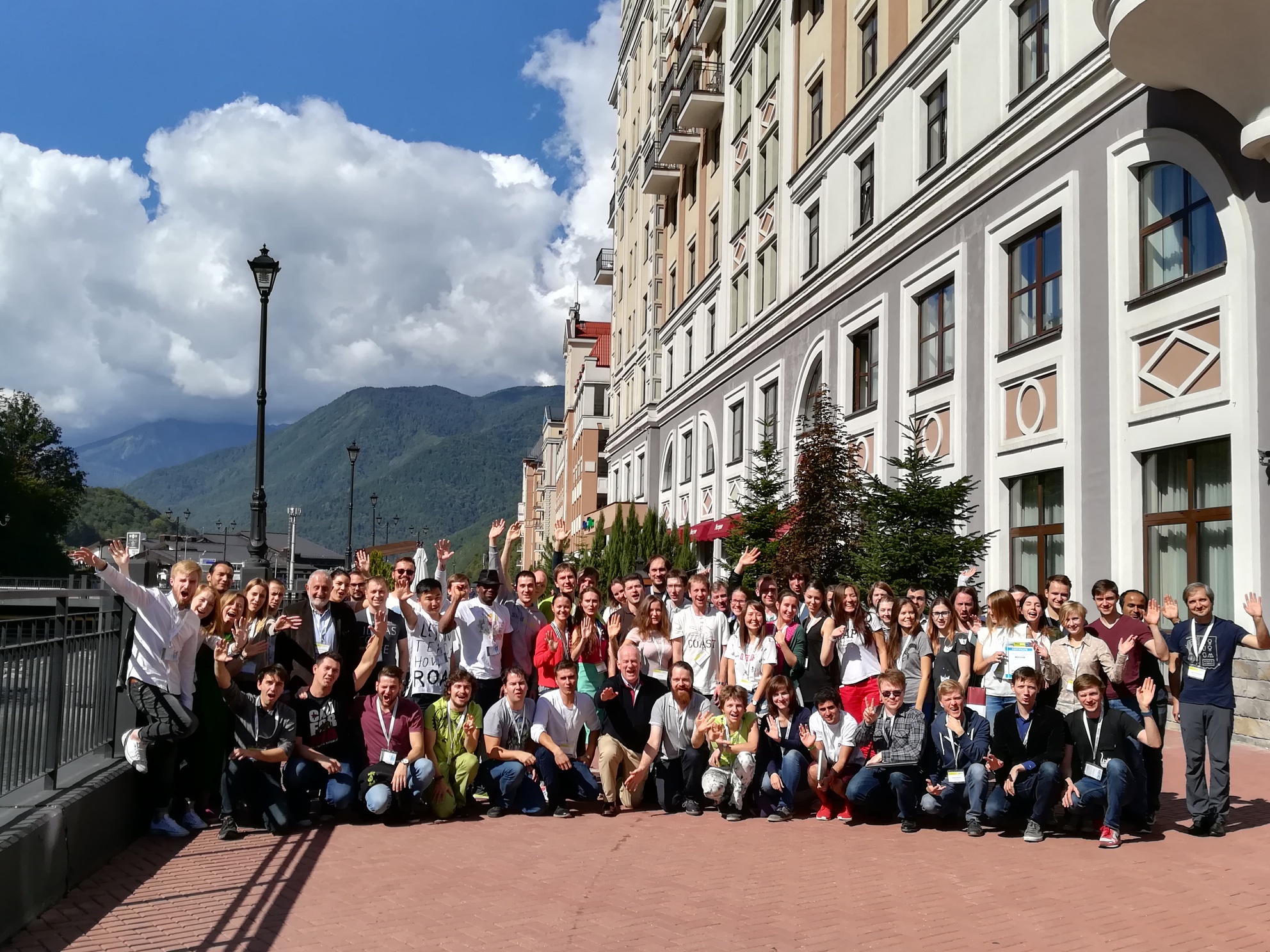 Skoltech’s cross-disciplinary Gen-Y conference has wrapped up in the ski resort of Rosa Khutor near Sochi. MSc and PhD students gathered alongside postdoctoral researchers and young professors from Skoltech’s various CREIs for four days of lectures, seminars, poster sessions and fun. Attendees were able to share their research, forge new partnerships and learn a ton. There were 73 participants, as well as a host of organizers and invited speakers, all of whom partook in a packed academic and social schedule.

Skoltech Professors and invited speakers from a number of different countries attended the conference to give talks about the hottest topics in various scientific fields.

Topics covered during the conference included cutting edge research in the areas of robotics, human-computer interface, the Internet of things, the biophysics of DNA, the future of pharmaceutical industry and much more.

There were also interactive panel discussions where seasoned experts shared their insights on such practical issues as commercializing scientific achievements and how young scientists can chart their career paths.

It also featured lively debates. On the future energetics panel, Skoltech professors who are establishing smart grids and energy storage debated professors from the oil and gas field. They grappled with several complex topics, including whether the energy sector dominance of hydrocarbons was approaching its demise, and the impact of hydrocarbons on global warming.

Nine of the young researchers in attendance were given the opportunity to deliver oral presentations; the rest presented their work during two poster sessions.

Many of the conference participants and speakers considered the poster sessions to be among the conference’s most exciting events. The discussions surrounding the posters carried on for hours longer than scheduled, lasting until between midnight and one in the morning each night.

Particularly impressive was the cross-disciplinary interaction. Everyone was interested not only in their work, but also in the work of colleagues from other areas. This created a unique opportunity for audiences to learn something fundamentally new, and for speakers to discover how to talk about their work in a clear language. After all, sometimes the explanation had to start with an explanation of each word in the title of the work. 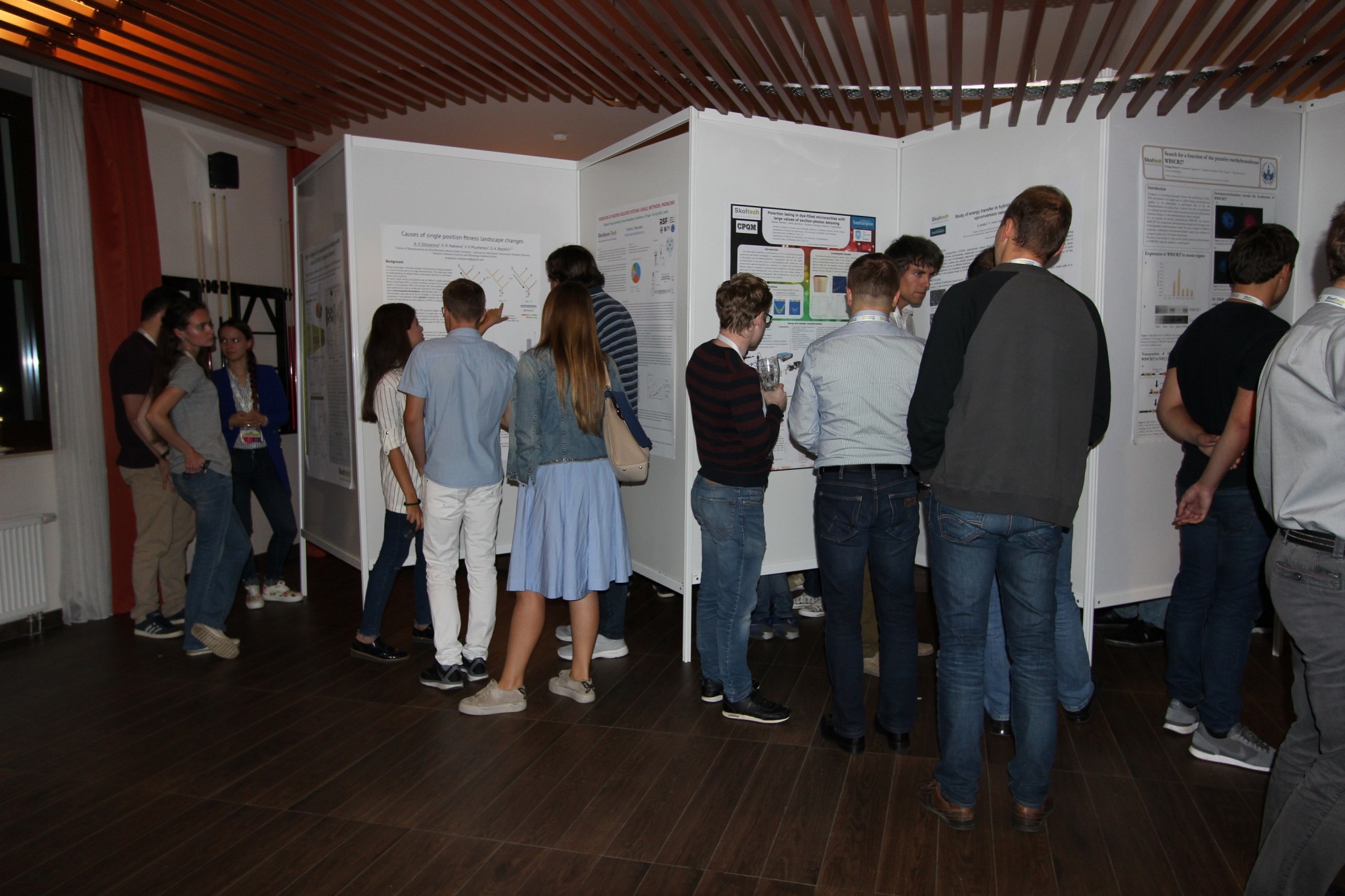 A candid shot of one of the captivating poster sessions that spilled late into the evening. Photo: Skoltech.

Leila Ismailova, a senior researcher at Skoltech’s Hydrocarbon Recovery Center and one of the conference organizers, told us: “When we planned the conference program, we tried to make it as interactive as possible. So we had breakfasts with professors, where participants could discuss not only science, but also music, football, rock-climbing, and even how to cook pasta! In order for the participants to get to know each other better before poster sessions, we asked each person to deliver a one-minute poster presentation. In advance, the participants prepared two slides and we asked them to describe their scientific research in just in a few sentences. Some of them approached this very creatively. There was a very positive and cheerful atmosphere in the room. Most importantly, this entailed very active discussions between the participants during the poster session.”

Modern science is not only never done alone; in most cases it requires collaboration between specialists from different fields. For example, for biological research, mathematicians, physicists, programmers and many others are often required. One of Skoltech’s missions is to promote interdisciplinary research and discoveries. Therefore, the main task of the conference was to introduce students and young researchers from different research centers of the institute, to give them the opportunity to share their ideas and results in a formal and informal way and, possibly, to receive useful advice or even to find collaborators for joint research or business partners. The organizers completely coped with the task set.”

Another organizer, Ekaterina Khrameeva, a researcher at the Center for Data-Intensive Biomedicine and Biotechnology, added: “Over the course of a few days at the conference, I met more people than I had during several years of work at Skoltech. It is useful and interesting to know what our colleagues from other centers are doing.”

The conference participants did not have a minute to waste; even meals were a special occasion. During each breakfast, the organizers invited participants to sit down with the professors in attendance and engage with them on a variety of topics, including non-scientific ones.

In order to introduce all participants to each other, in addition to a the scientific and educational program, a comprehensive social program was put in place.

It started with the opening ceremony. The participants split up into teams to construct the simplest device that would allow an egg to land from the height of a person standing on a chair and not break. Not all teams succeeded, but all demonstrated excellent teamwork.

This is very important, as all new discoveries and innovations are the result of successful teamwork and communication between participants.

This amusing competition was conducted by Professor Zeljko Tekic of the Center for Entrepreneurship and Innovation, who played a pivotal role in supporting the organizers with the social program.

On the third day, the participants went to the SkyPark, a mountainous recreation area that features the longest suspension bridge in Eastern Europe. Dinner was also organized there.

On the penultimate day the participants and guests of the conference went to the Rosa Peak, the highest point of the Rosa Khutor ski resort, at 2,320 meters above sea level. 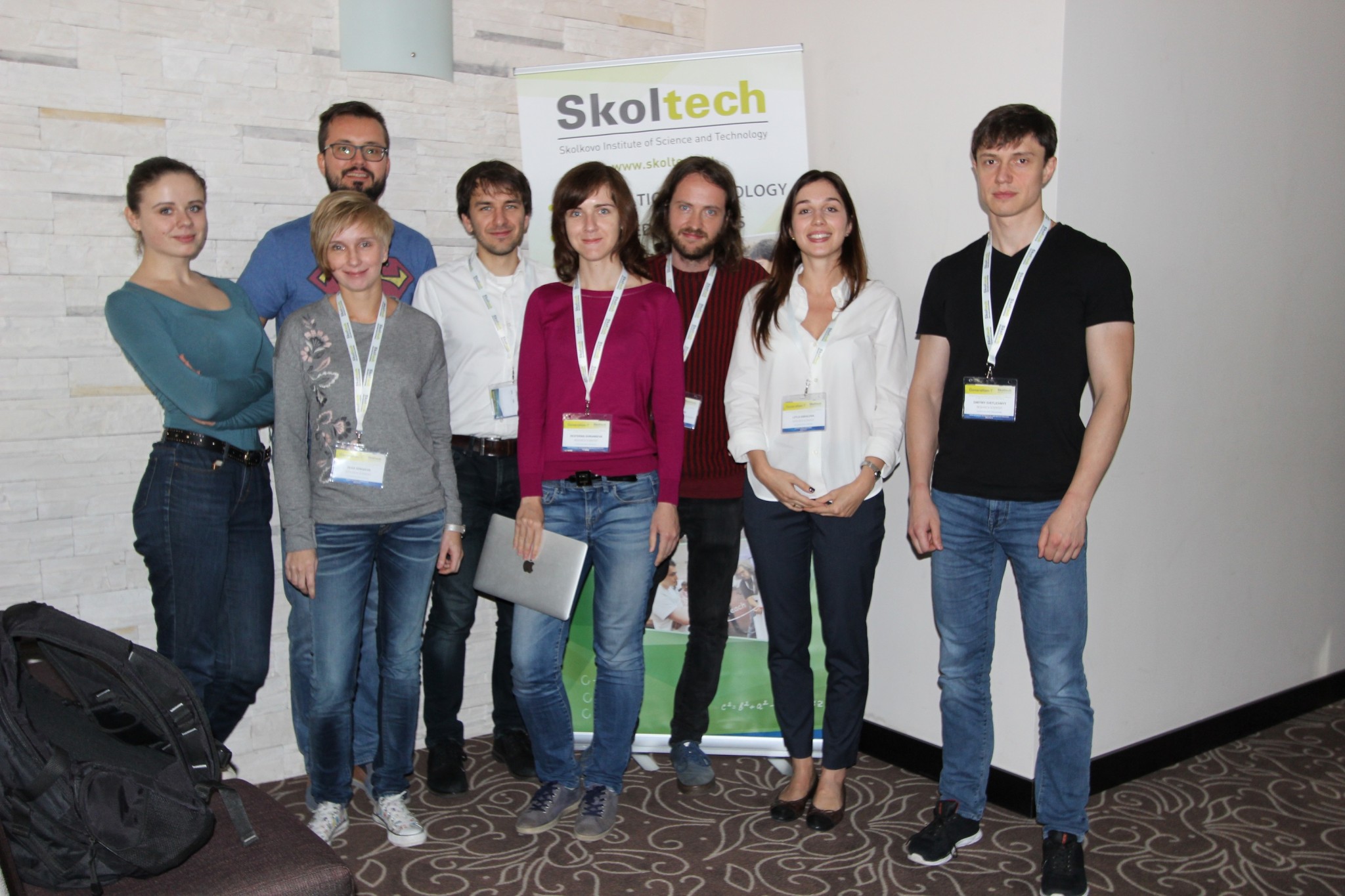 Organizer Mael Brossard, Facilities Manager of the Center for Photonics and Quantum Materials, said: “We started to work on this conference more than half a year ago. It was a pretty tough time; we were very close to giving up. But it ended up being very nice and interesting. It would be nice to do it every year. The main goal was to get people to talk to each other. A key issue in Skoltech is a lack of communications between researchers from different CREIs. Now the CREIs are very well defined and there are few contacts between them. We want to go back to the initial initiative of Skoltech and stimulate this cross-communications.”

Fedor Fedorov, a senior researcher at the Center for Photonics and Quantum Materials, said: “I liked the conference very much. This is a very good platform for further interaction between Skoltech CREIs. The best part is that you are a member of the community, now you know people and you understand that we are a large team and you can always ask the experts if your research is in sync with their activities. I’ve read several reports whose authors I’d like to get to know better. In any case, it’s nice to know what people are doing, to know the community which you work in.”

Very important indicators of success are the opinions of scientists with global reputations, as they have participated in a wealth of international conferences.

Professor Clement Fortin of the Skoltech Space Center, Skoltech Associate Provost, Dean of Faculty, was highly enthusiastic about the conference. “The Gen-Y conference has enabled post-docs, PhD students and MSc students to learn from each other and really practice interdisciplinary research. It is the most interdisciplinary meeting that I have ever attended. The posters sessions were particularly successful; 60 posters were discussed, and both sessions lasted more than three hours each – a far cry from the one hour that was allocated for them. In fact, the second one lasted close to five hours, with some students sticking around until one in the morning! Overall, a great success!”

Boston University Professor Maxim Frank-Kamenetskii was similarly impressed: “I really enjoyed the conference, especially its multidisciplinarity. It’s very rare to experience such a thing. The poster sessions were interesting and everyone actively participated. To me, such multidisciplinarity seems very useful. After my lecture, many people from the IT field talked to me and said that they were interested and asked questions. It was clear that they knew very little about biomedical issues, but they were very interested. All this is extremely valuable. The organizers managed to attract very good and strong speakers. I really liked it.”

The excitement of the professors and researchers was echoed by PhD and MSc students.

In the words of Mikhail Pugach, a PhD student of the Center for Energy Systems: “I really liked the conference! It had very good organization and was in an insanely beautiful place. It was useful and interesting. During the poster sessions I met a lot of guys from other centers, I found out what they were doing, I picked up a lot of new things for myself. I especially enjoyed the lectures of Christoph Guger about the human-computer interface and Maxim Frank-Kamenetskii about DNA. Although this is not my specialization, it was very interesting to listen to.”

Aisilu Askarova, a PhD student at the Center for Hydrocarbon Recovery, added: “The conference is just incredible. So many different activities, we have met so many people. This is very useful from the point of view of science and not only that, an interesting mix of scientific and social components. I think this is exactly how the Skoltech atmosphere should be.”

Gen-Y conference was a completely new format for Skoltech, it was very risky to organize it, because no one knew how it would be accepted, how many people will submit their abstracts and how it will pass.

Organizer Yury Gadush, senior research scientist of the Center for Photonics and Quantum Materials: “People are now taking care of their careers, but this conference is not something that you can include in your CV. And I hope that you came here not because the sea is 40 minutes away. If the conference hall were empty, then this conference would never happen again. But we saw yesterday, that some people continued the discussion near the posters until 12 am. We have a day and a half left, use it to meet the maximum number of people. You never know who from those people around have the knowledge and experience that you need to do something special.”

Despite the extensive social program, the working atmosphere at the conference reigned from the entering the plane in Moscow and before returning back. Many participants found people engaged in similar research or using methods of interest to them. And no doubt new acquaintances will lead the participants to new ideas, projects and joint research. The participants’ opinions can be listened for a long time, but they are all about the same thing: about new useful contacts, communication, cross-disciplinary interaction, widening of horizons, first-class speakers and talented organizers, which means that the original idea was realized.

We will close with the words of Professor Maxim Frank-Kamenetskii: “It will be good for Skoltech to continue this tradition of such meetings , because it is a great success.” 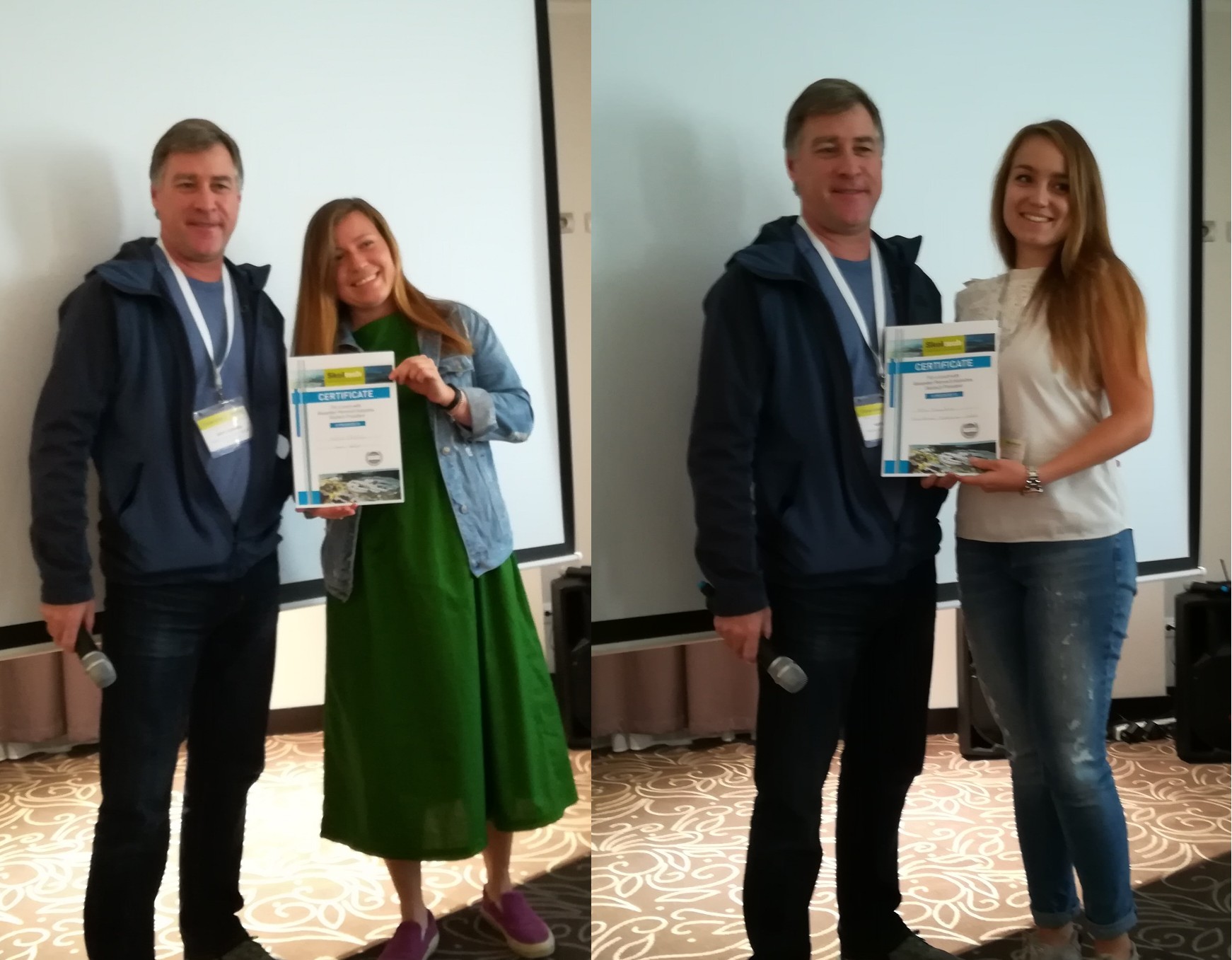