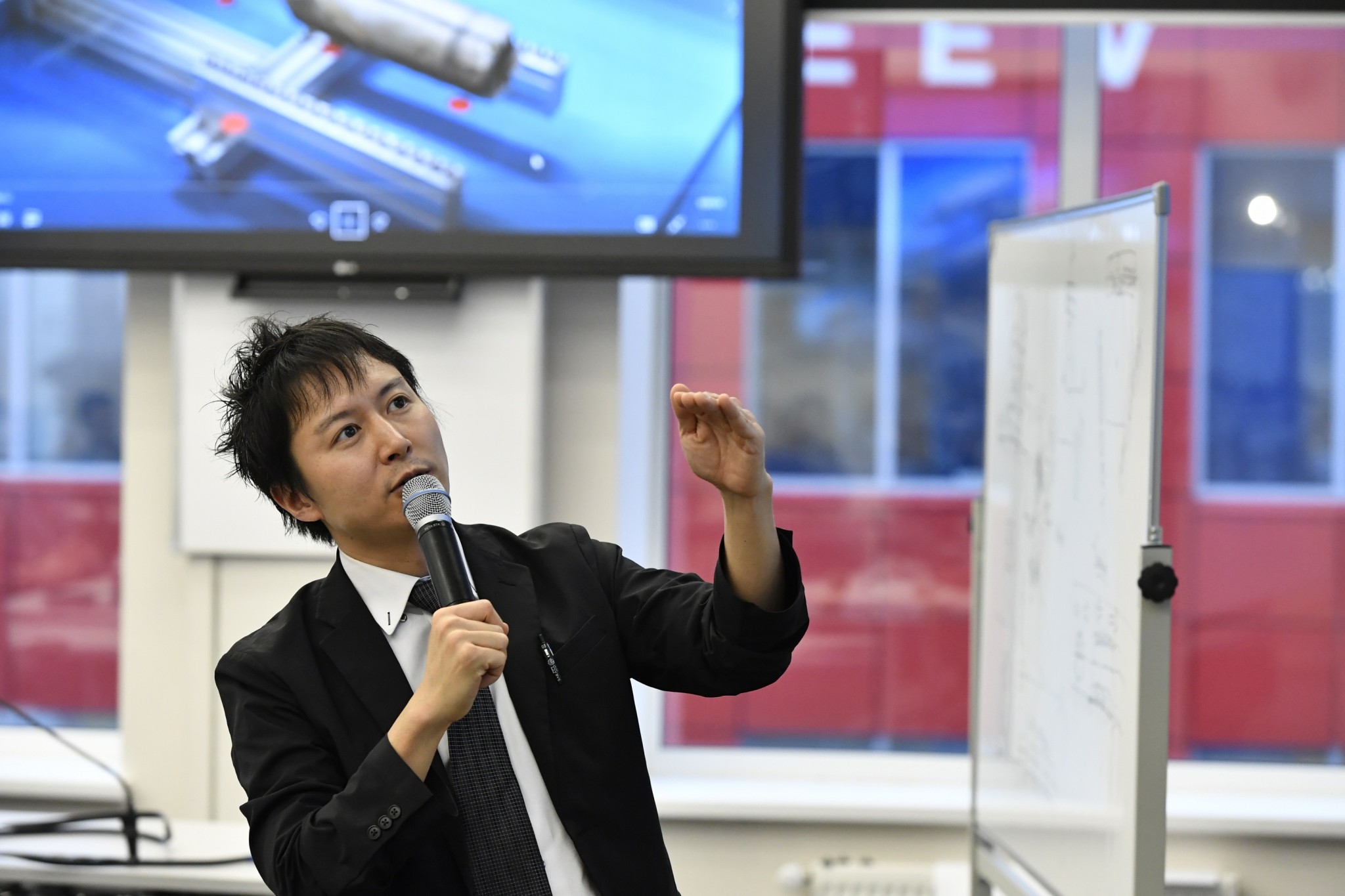 As a boy in elementary school, Kenjiro Tadakuma was captivated by a manga called The Secret of Robots, which postulated that robots exist for the purpose of helping people.

In the years that followed, this hypothesis would guide his scientific pursuits down a path unparalleled by any of his peers.

Ultimately, it would lead him to revolutionize the way robotic crawlers move, making it possible for them to reach victims of natural disasters here on Earth, and to traverse terrain previously considered to be impassable on Mars or the Moon.

During a recent visit to Skoltech, Tadakuma, now an award-winning professor of robotics at Tohoku University in Japan, shared his depth of engineering knowledge and practical advice with students and faculty members.

We caught up with him on the sidelines of his guest lecture to learn more about how he has changed the world of robotic crawlers and where he plans to go from here.

In the years following the seminal moment when young Tadakuma discovered the potential of robots, he developed a fascination with the rovers that would eventually be deployed as part of NASA’s Mars exploration initiative.

This interest ultimately led him to the laboratory of pioneering roboticist Professor Shigeo Hirose at the Tokyo Institute of Technology (Tokyo Tech), where Tadakuma completed his MSc in 2004.

Shigeo made a name for himself by creating robots capable of moving in novel ways, such as snakelike robots that could slither toward difficult-to-reach targets, and the so-called Ninja robot, which can scale vertical walls and crawl upside-down across ceilings.

“In Shigeo’s lab, I focused on the mechanical design of robots. My MSc research project was on an omnidirectional mobile robot with a disc-shaped configuration,” Tadakuma said.

In 2007, he went on to pursue his doctoral studies at Tokyo Tech, focusing on robotics for planetary research. At the time, many of the available rover models faced difficulty circumventing obstacles in their paths due to their inability to move side-to-side. Turns likewise proved difficult.

He promptly set about creating the Omni-Ball, a mechanism that would enable rovers to move in any direction over practically any type of terrain.

From the outside, the Omni-Ball looks like a ball with a crack around its circumference. Its surface comprises two hemispheres that rotate passively in accordance with the movement of an active rotational axis, located at the center of the ball.

He used this mechanism to create the Omni-Crawler – a cylindrical wheel with dozens of passive belts in place of the hemispheres used for the ball.

In 2011, a video of the Omni-Crawler technology [reposted at the bottom of this article] spread like wildfire across the internet, propelling Tadakuma into the international spotlight.

“Prior to that video, only robotics researchers knew about the project. That video generated interest among non-specialists from around the globe,” he said.

From the cosmos to the bottom of the sea

The Japanese Space Agency has been developing Tadakuma’s Omni-Crawlers for lunar exploration since 2010.

But its applications have proven much further reaching than initially anticipated. Due to its agility and capacity to traverse rough terrain and sidestep obstacles, it can be used to replace humans in a broad range of perilous situations, from deep-sea exploration, to complex agricultural initiatives, to search-and-rescue missions.

To further expand its repertoire, Tadakuma is currently working on adapting the Omni-Crawler to expertly handle deformable surfaces, such as those often present in the aftermath of major natural and manmade disasters.

“This adapted technology could be used for lunar and planetary exploration, as well as to explore volcanoes and other disaster areas ranging from earthquakes to terrorist attacks,” he said. “What all of these scenarios have in common is they all involve extremely rough terrains.”

In particular, Tadakuma expects that Omni-Crawlers will eventually be used to conduct search and rescue missions in environments so treacherous or marred by disaster that they are no longer safely accessible to human emergency crews.

But Tadakuma is not driven by any one of these applications in particular; his drive stems from the pervasive desire to invent something truly revolutionary. This impetus, he believes, is central to his success. In his view, focusing on the mechanism itself – rather than letting his thoughts be clouded by potential technological applications – clears his mind and leaves him open to inspiration. 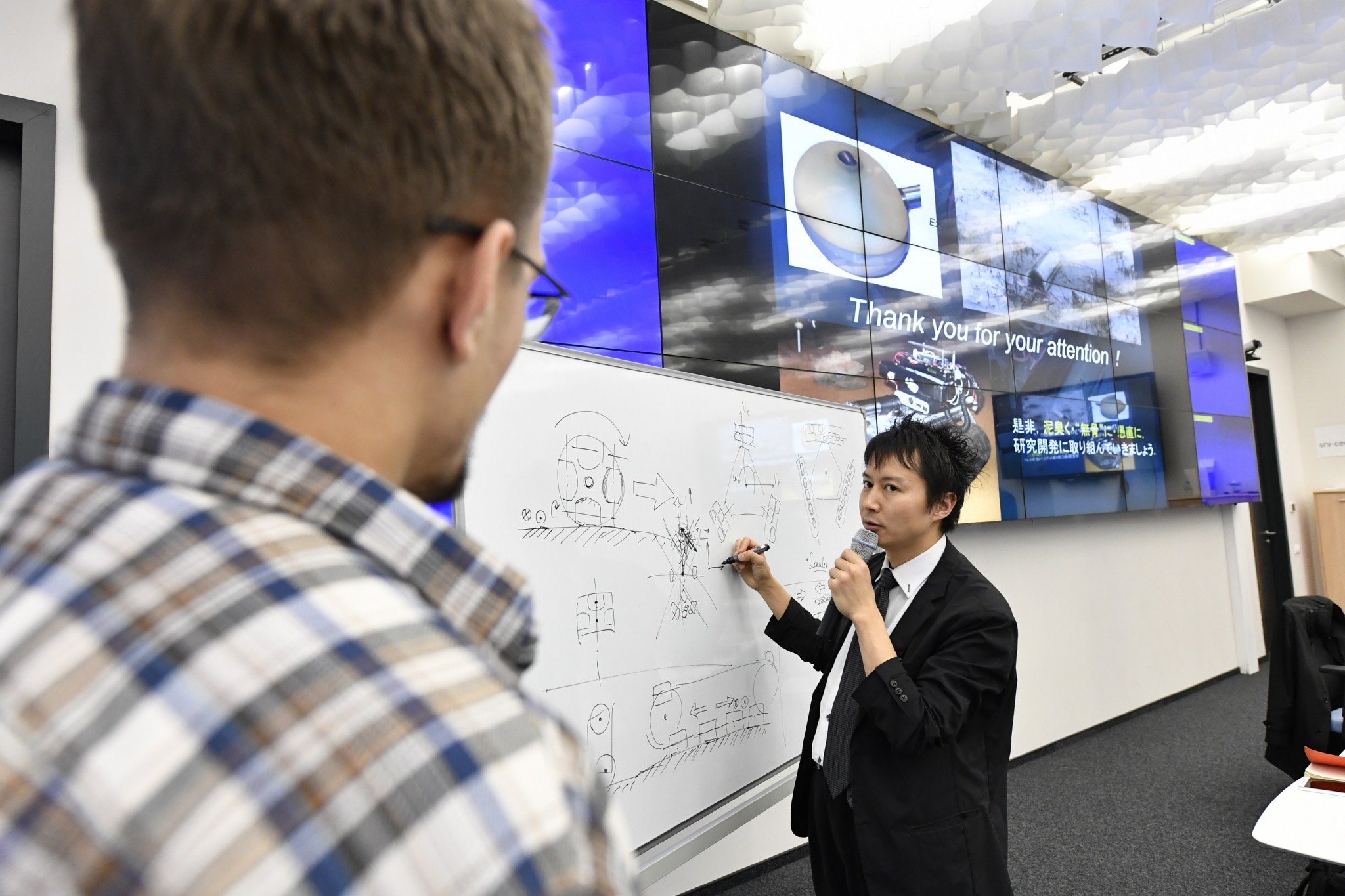 Tadakuma discusses his work with a Skoltech student. Photo: Skoltech.

“What I am most interested in is mechanical configuration and design. Rather than focusing specifically on exploring a certain planet or creating a robot equipped to handle a certain disaster environment, I focus on how to realize and inspire mechanisms required for omnidirectional motion across rough surfaces,” Tadakuma said.

“Mars and the moon have already been explored. I’d prefer to devote my career to achieving something much more difficult – to inventing a radical new mechanism,” he said.

In the immediate future, he plans to write a textbook about how to invent new mechanisms.

“In order to realize this goal, I plan to focus on creating more new mechanisms, because to write a textbook will require a great deal of examples and systemization. Of course this will be difficult, but when I decide to do something, it happens,” he said.

In a brief interview following Tadakuma’s talk, Tsetserukou said that the Japanese roboticist is respected around the globe for his knack for developing novel omni-robots with unique configurations and properties.

“Omni-robots are more flexible, reconfigurable and space-efficient than conveyors and differential wheeled robots, and also can substitute manned lift tracks in warehouses. A novel configuration can extend the application for rescue operations, the delivery of goods over rough and curved terrain in agriculture, and even can be used as planet rovers,” Tsetserukou said.