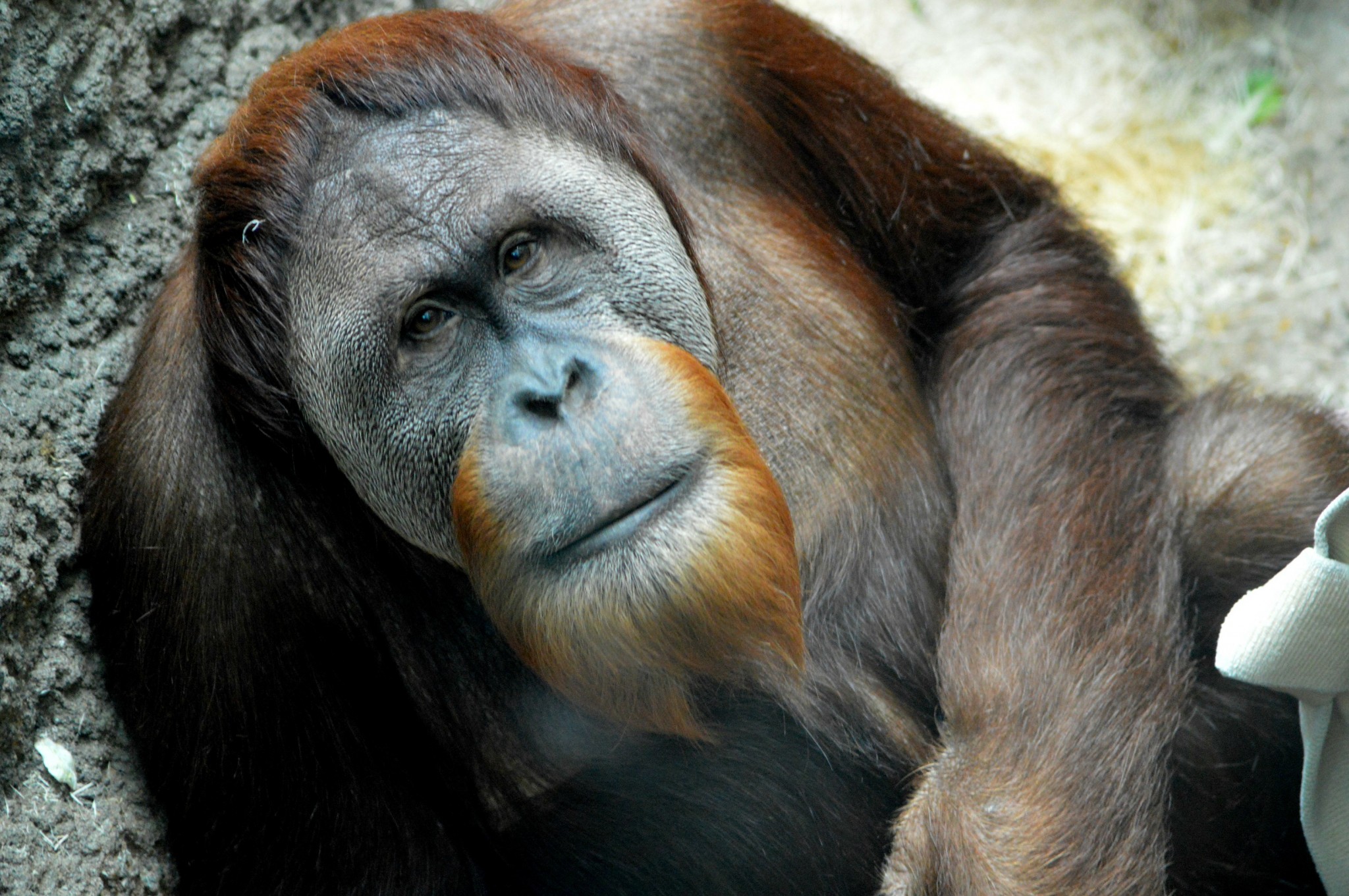 Read on to learn how one Skoltech professor and his team are peering into the minds of monkeys to unlock the secrets of the human brain. Photo: Public domain.

To many, thoughts of monkey brains evoke blood-soaked images of urban legends and Indiana Jones.

But to Skoltech Professor Philipp Khaitovich, they represent perhaps our greatest hope in the quest to understand the myriad mysteries of human cognition and brain function.

Understanding what distinguishes our brains from those of our simian counterparts could give us practical guidance for all stages of human life – from how best to educate our young, to how to mitigate or eliminate many of the cognitive issues that diminish the independence of our elderly.

Brain tissues and the quest to understand human intelligence

Driven by a pervasive desire to understand what distinguishes the human brain, Khaitovich has devoted his scientific career to analyzing the genetic and metabolic discrepancies between brain tissues obtained from a broad range of species.

“All species have features that we can categorize as smart or emotional, but studies show that human cognitive abilities far exceed those of other species. And we see the consequences of this all around us,” the evolutionary biologist said during a recent interview. 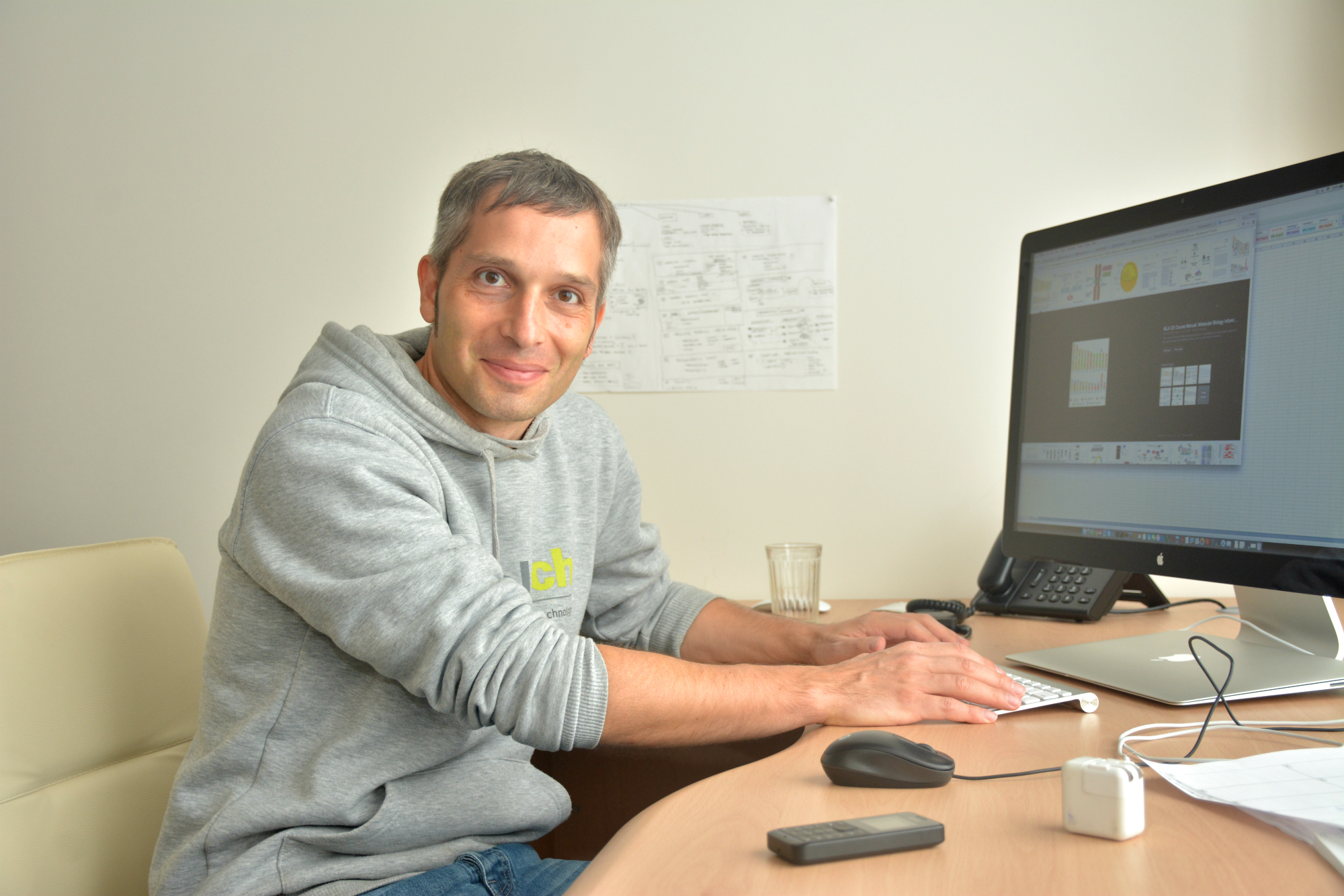 Khaitovich pictured in his office at Skoltech. Photo: Skoltech.

“We believe that there must be some material basis for this cognitive superiority within the organization and functionality of the brain. Yet we know very little about what this basis could be. Behavioral experiments can tell us how our brains work, but they don’t tell us anything about why our brains work differently. To understand what makes the human brain so special, one must look into the brain itself,” he said.

Khaitovich was quick to point out that while it may be tempting to assume that the difference between man and ape may boil down to brain size, this logic fails when you consider the fact that humans exhibit higher intelligence than such species as whales, elephants, and even bottlenose dolphins – whose brains tend to outweigh ours.

A side-by-side comparison of the actual brains of a wild boar (left), a bottlenose dolphin (center) and a human (right, model). Photo: Boksi // Wikipedia Commons.

Further evidence that brain size doesn’t dictate cognitive abilities can be found in the history of our own species, he said: “For more than a million years, our ancestors had brains that were about the same size as ours, yet they had a very primitive culture practically devoid of innovation. They used the same set of tools for more than a million years with no innovations. Then, suddenly, less than a half million years ago we saw an explosion in innovative activities, leading to the creation of an amazing civilization.”

In short, it’s not enough to look at the size of the brain or the behavioral manifestations of brain function; to truly understand what sets the human intellect apart, researchers must focus on brain tissue.

Most scientists in this line of work prefer to conduct their research with model organs, which are considerably easier to obtain than brain samples from humans, monkeys and apes.

While Khaitovich occasionally works with models while conducting experiments that require a scrupulously controlled environment, he believes that real organs are critical to real progress.

“It’s hard and it’s dirty to find samples from humans and monkeys, but they provide the most interesting results,” he said.

To obtain tissue samples, Khaitovich and his team primarily rely on brain banks – repositories that store brains donated by deceased humans for scientific research. In order to provide clean results, they seek tissues extracted from donors whose brains were healthy and whose deaths were quick. 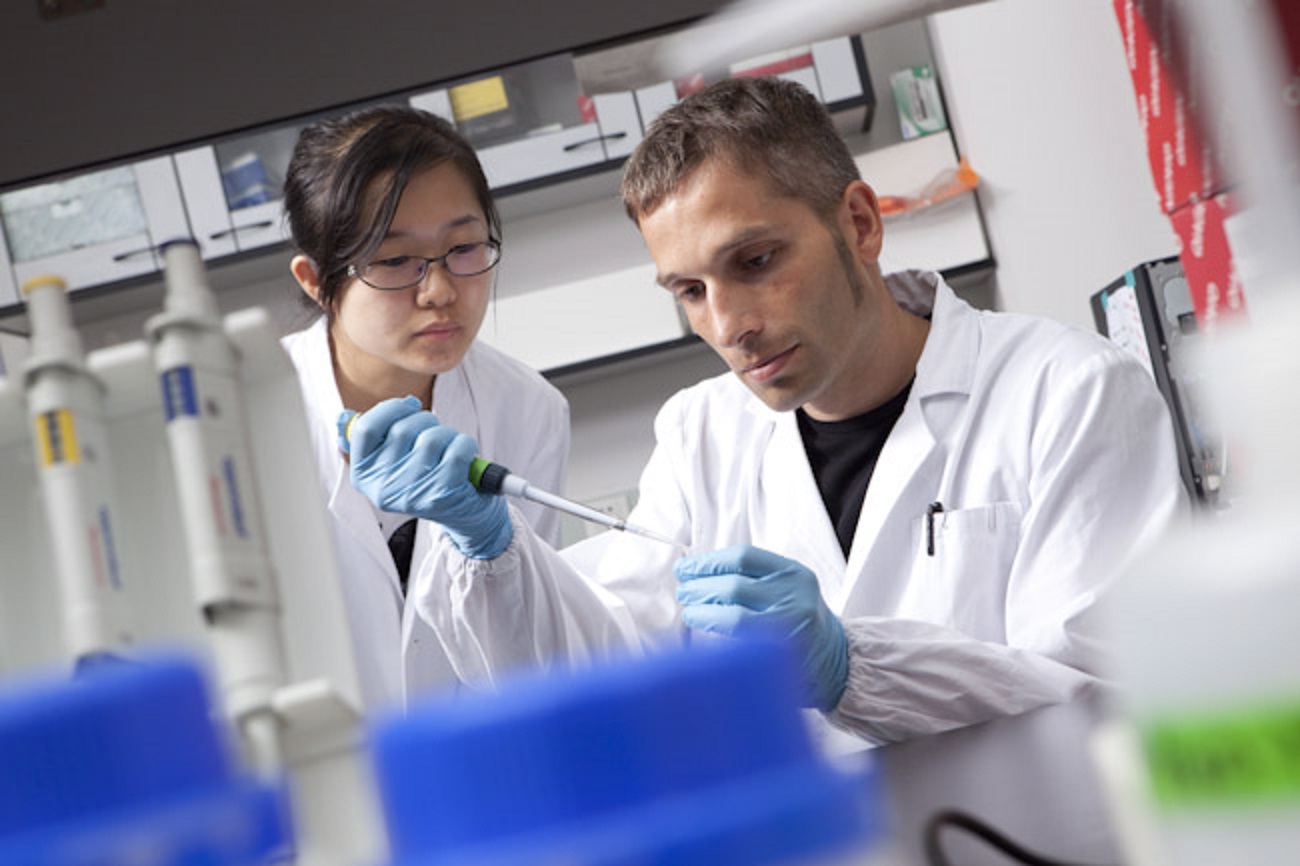 Khaitovich and one of his researchers at work in his lab. Photo: Skoltech.

He explained that the latter is necessary because the experience of prolonged agony leading up to a person’s death affects brain biology in a way that would compromise test results.

“For us, it would be best to study a living brain, but obviously this is impossible. Even it were legal, we would want nothing to do with that. Thus when we look for human postmortem tissue samples, we look for brains that are as healthy – and thus as close to the live, original state – as possible. We generally seek tissues from donors who were killed in car accidents or who suffered fatal heart attacks – deaths that came very quickly and thus didn’t have the chance to significantly affect the brain,” he said, noting that it’s “always a bit weird” to talk about the optimal way for a brain donor to pass.

“It’s important for people to know that we don’t kill chimps, apes, monkeys or human beings for our research,” he emphasized. “All of our samples are from humans or animals who died of causes unrelated to our studies. Sometimes some monkeys are actually killed as part of a control group for a drug test, but they’re not killed for us. We’re basically like scavengers who come to them and take tissues.”

But the fact that these samples are ethically sourced does not mean they’re easy to come by. He noted that gathering tissues for each study can take months or even years.

Due largely to the novelty of his work, and to the fact that he and his researchers are committed to doing what it takes to obtain real brain tissues, thus producing the most groundbreaking results, Khaitovich is no stranger to media attention.

A study his team conducted on the breakdown of lipids in Neanderthal brain tissues compared with those of modern man courted global media attention, generating headlines ranging from the serious to the sensational; the Daily Mail bellowed, “Did the Neanderthals make us FAT?”

Several of Khaitovich’s other research projects have also generated headlines in recent years.

One widely read study theorized that schizophrenia emerged as a result of human brain function being stretched to its maximum capacity during the evolutionary process.

Another found that humans’ high intelligence may derive from the fact that at some point during our evolution, energy formerly reserved to fuel muscles was rerouted to fuel our brains instead.

The range of issues mentioned above reflect the astonishing diversity of subjects that remain to be explored with respect to the evolution of the human brain.

“I think we’ve only started to scratch the surface of the human brain because it’s such a complicated organ,” Khaitovich said. “On one hand, our goal is not so difficult because we don’t need to understand the whole brain; we just need to find the differences between the human brain and other kinds of brains. But on the other, it’s extremely difficult because the brain is a very plastic tissue. Every time we learn something new, our brain changes.”

The reality of this plasticity is particularly relevant in childhood.

While apes and humans alike are born with very little understanding of how to behave in the world, the former adjusts much more quickly than the latter. Photos: Public domain.

“All of us – monkeys, chimps, humans – are born with almost no knowledge of how to behave in the world, or how to interact with other animals. Monkeys and apes form this knowledge very quickly – typically within several months. But in humans, this is a very, very slow process, taking at least the first decade of life. This is a dramatic difference,” Khaitovich said.

The implications of this discrepancy extend to human quandaries ranging from the origin of such cognitive disorders as autism and dementia – the discovery of which will be our best hope in treating and eliminating these maladies – to the best way to educate our youth – i.e., teaching methods that best correspond to the nuanced ways in which our brains develop.

Going forward, Khaitovich plans to continue scouring the globe for samples of test subjects young and old, simian and human, in his quest to add to the growing pool of known differences between the human brain and those of other species – pursuing his greatest professional passion.

“As a scientist, you spend lots of time working. This is true for all lines of work. But it’s only good if you’re really interested in the question. If you work on something you don’t like, it’s torture. I always tell my students – since you have to spend so much time on this, choose something that you like to study. And therefore you have to choose the question that you think is most interesting in the world. For me the question of why the human brain is different is the most interesting one, with all due respect to other questions. I want to know why the human brain is different. That’s why I’m studying it,” he said.