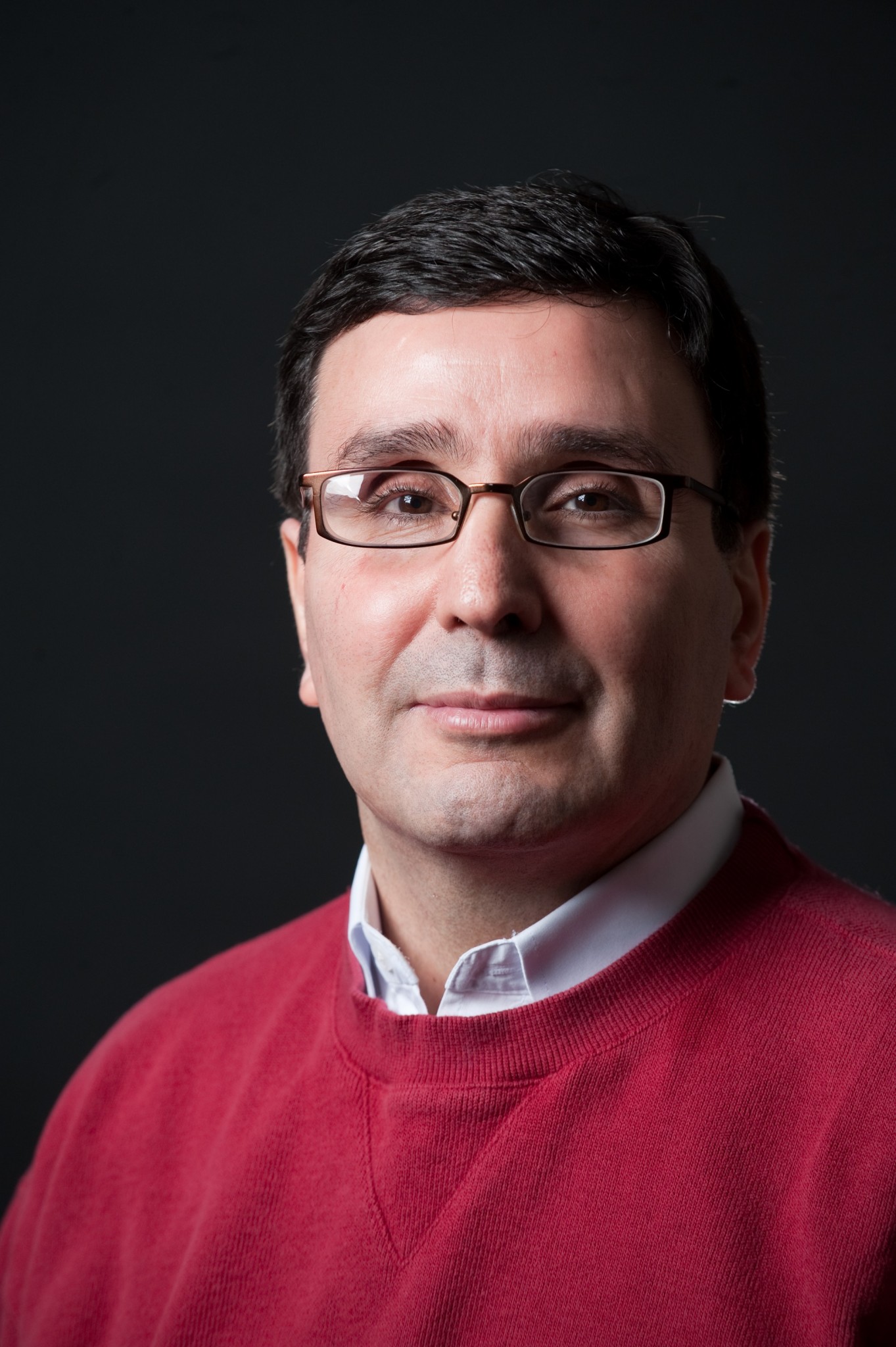 When Massachusetts Institute of Technology (MIT) Professor Kamal Youcef-Toumi considers adding a new project to his already expansive arsenal of innovations in the field of robotics, he considers two key questions:

Does the project have the potential for innovation in technology?

And does it stand to benefit the world in some way?

In his view, research institutes like MIT and Skoltech have nothing to gain from taking on projects that will not result in the creation of new knowledge and new technologies.

“It doesn’t make sense for someone at any research institute to work on things that other people have done already, because the purpose of our work is to develop new technologies and generate new knowledge that people can benefit from,” he said.

It was this line of thinking – paired with an ethos that throughout his career has driven Youcef-Toumi to pursue international partnerships and collaborations around the globe – that gave rise to the RecyBot, a high-speed intelligent robotic system that uses computer vision to dismantle electronic devices so their parts can be recycled.

We caught up with Youcef-Toumi on the sidelines of a recent guest lecture series he gave to Skoltech robotics students to learn more about RecyBot and the many other status-quo shattering projects that have emerged from his illustrious career.

Youcef-Toumi was working as a control systems engineer at MIT shortly after having received his MSc degree in the early 1980s when the world of robotics came crashing into his life.

Professor Harry Asada – then a brand new member of MIT’s faculty, having only received his PhD in 1979 – approached Youcef-Toumi out of the blue to ask if he would be interested in shifting gears to work on robotics.

As fate would have it, Youcef-Toumi soon learned that the engine control project he had been working on was in danger of losing funding, so he decided to take a chance on robotics.

He went on to complete his PhD under Asada’s guidance, and the two men continue to work together to this day, including co-teaching MIT’s flagship introductory robotics course. 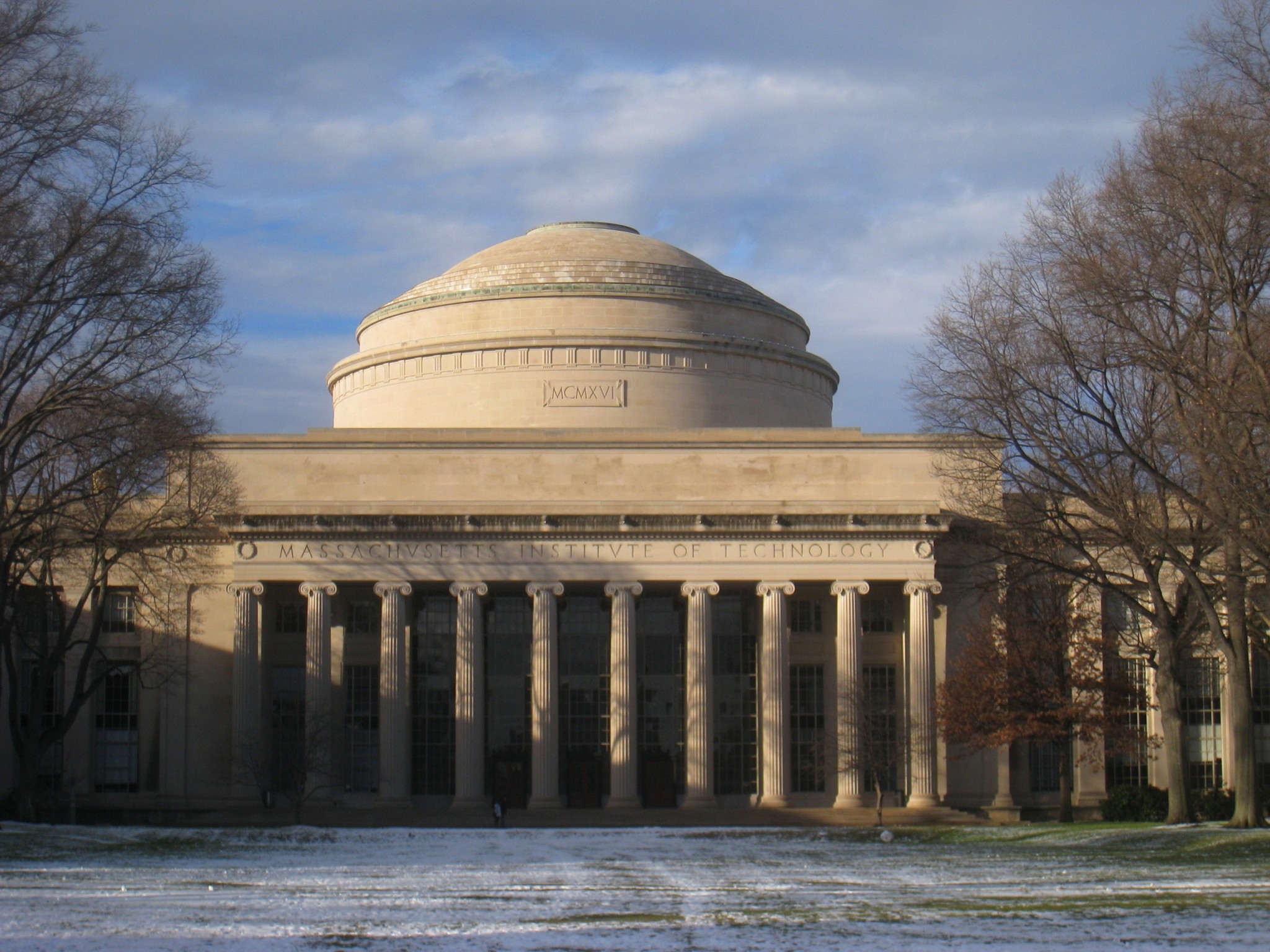 Over the course of his career, Youcef-Toumi has developed a reputation for creating high-speed and high-precision robotic technologies with a range of applications. Asked why he was drawn to this niche, he said simply, “I feel that anyone can make slow-moving robots.”

His projects have run the gamut from the world’s fastest ultra-precise laser-cutting robot in Japan, to an intelligent robot capable of actively managing a pet food production line in England – solving problems and making repairs in real time – to perhaps the tiniest video production project in history. His team has joined forces with a Chinese company to create videos in order to shed light on how processes such as material formation occur at the nanoscale.

But one area that he chooses to steer clear of is robotic technologies intended for military use.

“I’ve never done anything directly for the military, like weapons. When I’m working on a project, that project should not be related to weapons. Of course someone could argue that the technologies I work on could subsequently be used for military purposes; for example, I could work on robots for semi-conductor applications, and someone could say that semi-conductors can be used in tanks and planes and so on, but for me, the immediate project that I’m working on should not be military-related,” he said.

Robotic fish and the battle against toxic water

One of the most unique projects to have emerged from Youcef-Toumi’s expertise in high-speed, high-precision technology is the robotic fish.

Worldwide, policymakers grapple with how to reliably and efficiently detect and repair leaks in subterranean pipe networks.

“All the cities around the world have leakage issues. Whether we’re talking about water or natural gas, all of these resources are suffering losses in some way. In some places leaks can account for 40-45% of losses,” he said.

Losses of these sorts aren’t limited to the economic; left unchecked, they can prove deadly.

Horror stories abound of natural gas pipeline explosions that have claimed lives and caused untold property destruction around the globe.

And the situation with water isn’t much more optimistic; undetected cracks can allow contaminants to seep into a city’s water supply – causing citizens to unwittingly drink and bathe in toxic water.

Likewise, cracks can cause water to seep out into the soil surrounding pipes, softening the earth and ultimately causing sinkholes.

“If you talk to the water authorities in many countries, they all want the same thing: they want to supply water in a safe way,” said Youcef-Toumi.

The main problem is pipe networks tend to be massive – stretching for thousands upon thousands of kilometers in major cities. Manual inspection and detection would pose an untenable drain on resources.

“So we’ve been developing robots that can not only find these problems in the pipe networks, but that can also identify where they are and all of the characteristics that are associated with them, and then perhaps even repair them,” he said.

He has spent the past nine years working on this project as part of a partnership between MIT and the King Fahd University of Petroleum and Minerals (KFUPM) in Saudi Arabia.

The group found inspiration in fish. “In these robots we use technologies that we developed and learned from fish. That’s because these robots can’t be completely rigid. They have to be soft so that they can squeeze into small areas, and go around turns and bends. They wouldn’t work if they were rigid,” he said. 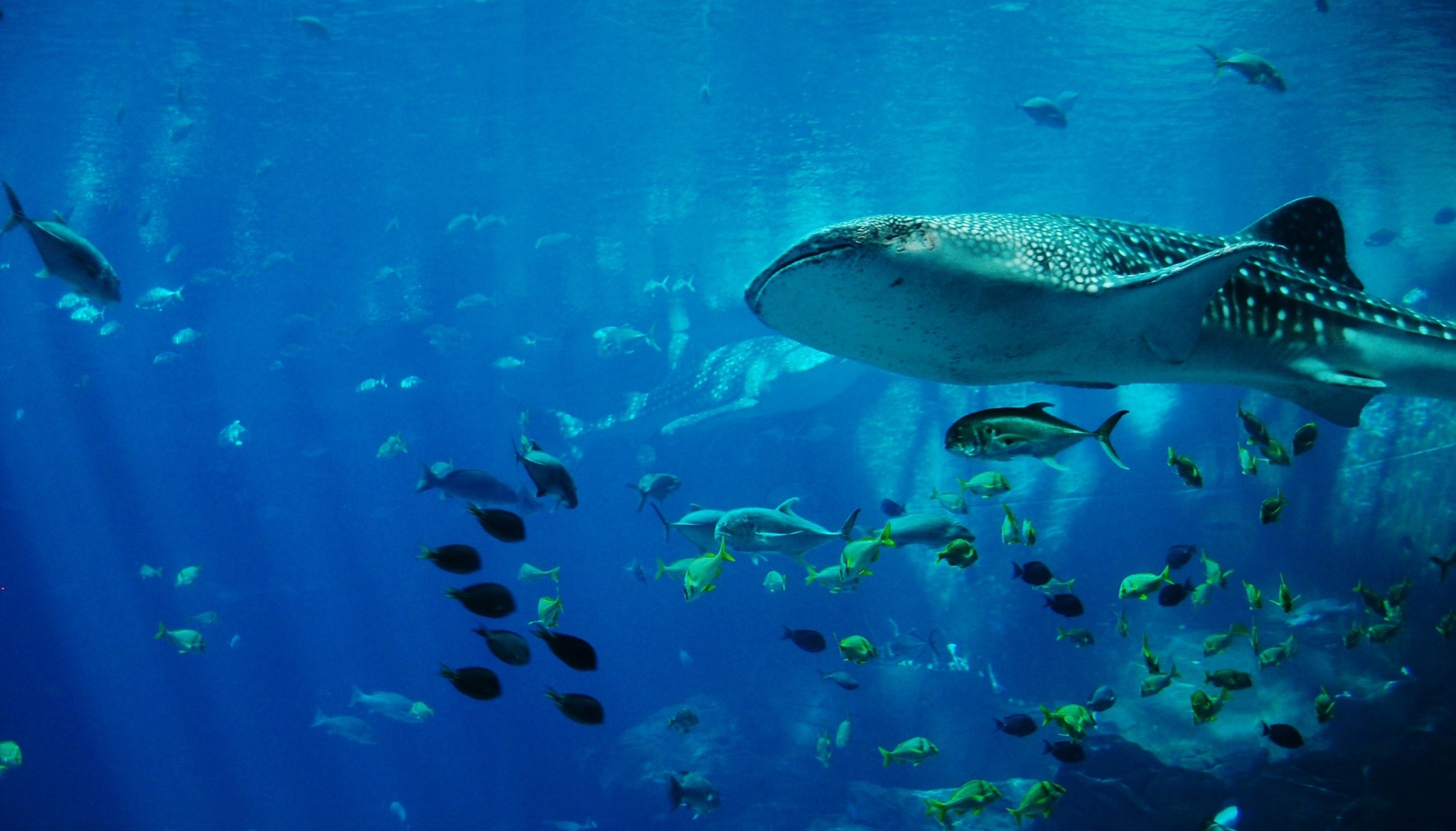 He noted that while not all such robots look like fish, they do share certain fish-like characteristics.

“These robots can flow with the water when they’re in pipes. If the water’s stagnant, they can propel themselves forward because they have batteries and propulsion systems. They can check the pipes and record everything that they find within, and either store all that data or communicate it to you wirelessly,” he said.

Driven by the goal of creating technologies for clean water and clean energy, the MIT-KFUPM team has developed a robust program that is rapidly gathering sponsors and commercialization opportunities.

Skoltech and the rise of the RecyBot

Youcef-Toumi has become a regular guest lecturer at Skoltech, visiting at least once a year to deliver a series of lectures in collaboration with Professor Dzmitry Tsetserukou, as well as hosting Skoltech students at his own lab at MIT.

Asked what attracted him to Skoltech in general, and to Tsetserukou’s award-winning robotics team in particular, Youcef-Toumi pointed to the institute’s early successes and top-flight student body.

“Skoltech is a new institute, but it is moving very fast and the resources here are great. The labs are truly impressive, the institute continues to attract top faculty members, and the students I’ve seen and communicated with through these robotics lectures – it’s like they have been handpicked,” he said.

He added that joint efforts such as these are invaluable. “I believe that collaborations between countries and between institutions – like the one we have between Skoltech and MIT – are not only vehicles for science and technology, development and education; they bring people together, enabling them to work together to create things that are good for humanity,” he said.

It was this line of thinking that laid the foundation for RecyBot, a game-changing mobile phone recycling technology. 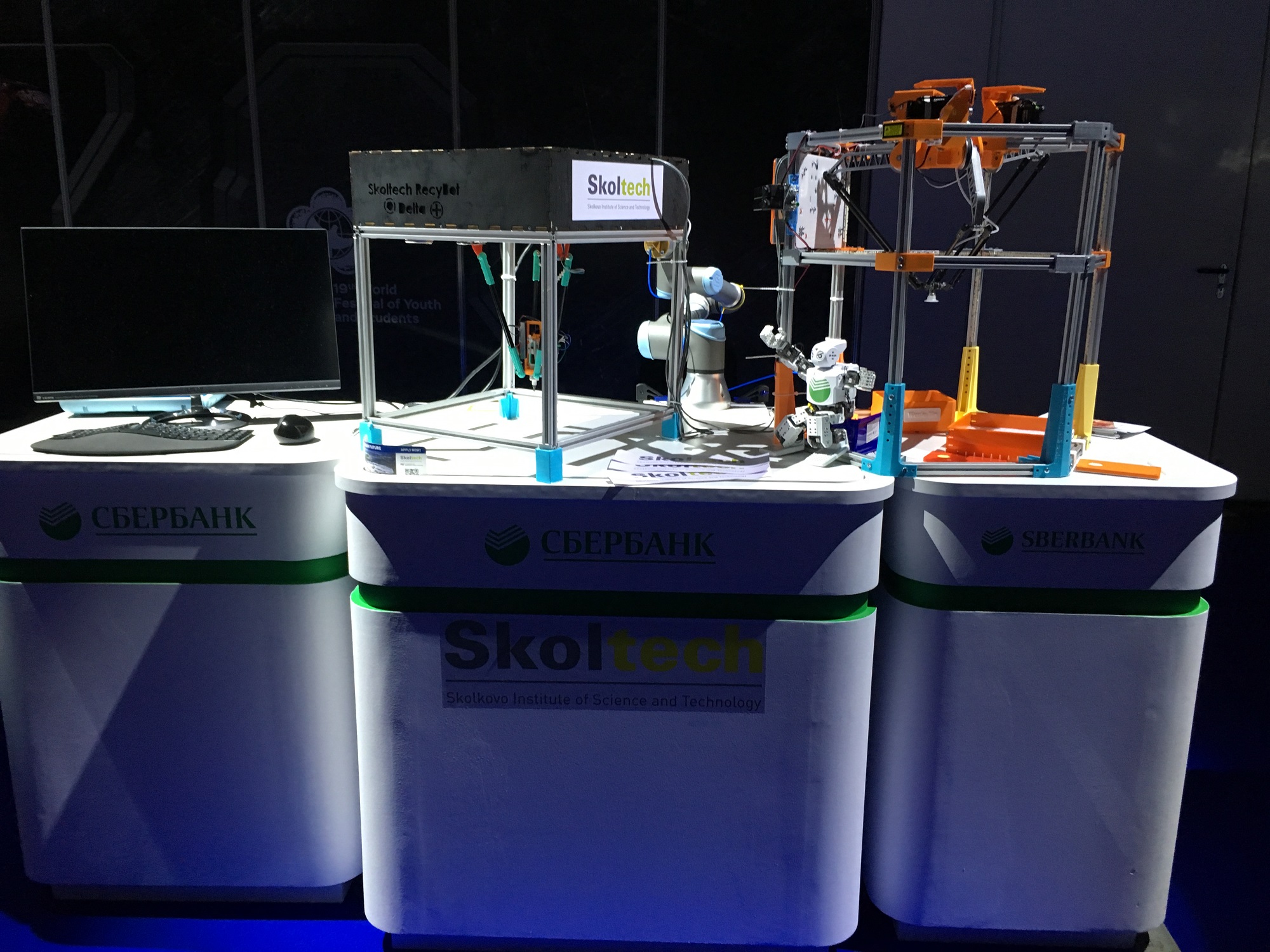 The Recybot system, pictured at the World Festival of Youth and Students. Photo: Skoltech.

“[Tsetserukou] and I were thinking about what would be useful first to Russia, and second to the world. Then we thought, there are so many phones and other electronic devices that are thrown away every year, and this creates a major issue in terms of the precious metals contained in these devices, as well as environmental consequences,” Youcef-Toumi said.

In terms of resources, our current dearth of smartphone recycling options has considerable consequences. As explained by Janez Potočnik, European Commissioner for the Environment, in a statement: “It takes a tonne of ore to get one gram of gold. But you can get the same amount from recycling the materials in 41 mobile phone.” In fact, Japan reportedly plans to recycle electronics in order to harvest gold, silver, and copper to craft medals for the 2020 Olympic Games.

Youcef-Toumi and Tsetserukou decided to work together to develop low-cost robots that are able to dismantle phones and remove and compartmentalize each of their component parts, which in turn could be used to create new phones or to be otherwise processed. For this pioneering idea, they won the Next Generation Program grant, awarded jointly by Skoltech and MIT.

The project has continued to attract widespread interest, including during a recent exhibition at the World Festival of Youth and Students in Sochi in October. You can check out a  clip from that event exploring how the RecyBot works below:

In February, it was featured in the MIT Technology Review. Last month Recybot research was published within the framework of the IEEE Haptics Symposium 2018 in San Francisco. Research related to the project has also been accepted for the Eurohaptics 2018 conference which will be held in Pisa, Italy in June.

As the project progresses, Youcef-Toumi said that some of the biggest obstacles have included teaching the robot to recognize each component and adapt its dismantling techniques accordingly, as well as designing an algorithm suitable for the task.

But as he has demonstrated time and time again, Youcef-Toumi is not one to shy away from struggling against the unknown to innovate and create – particularly if the prize is a novel technology that stands to change the world for the better.