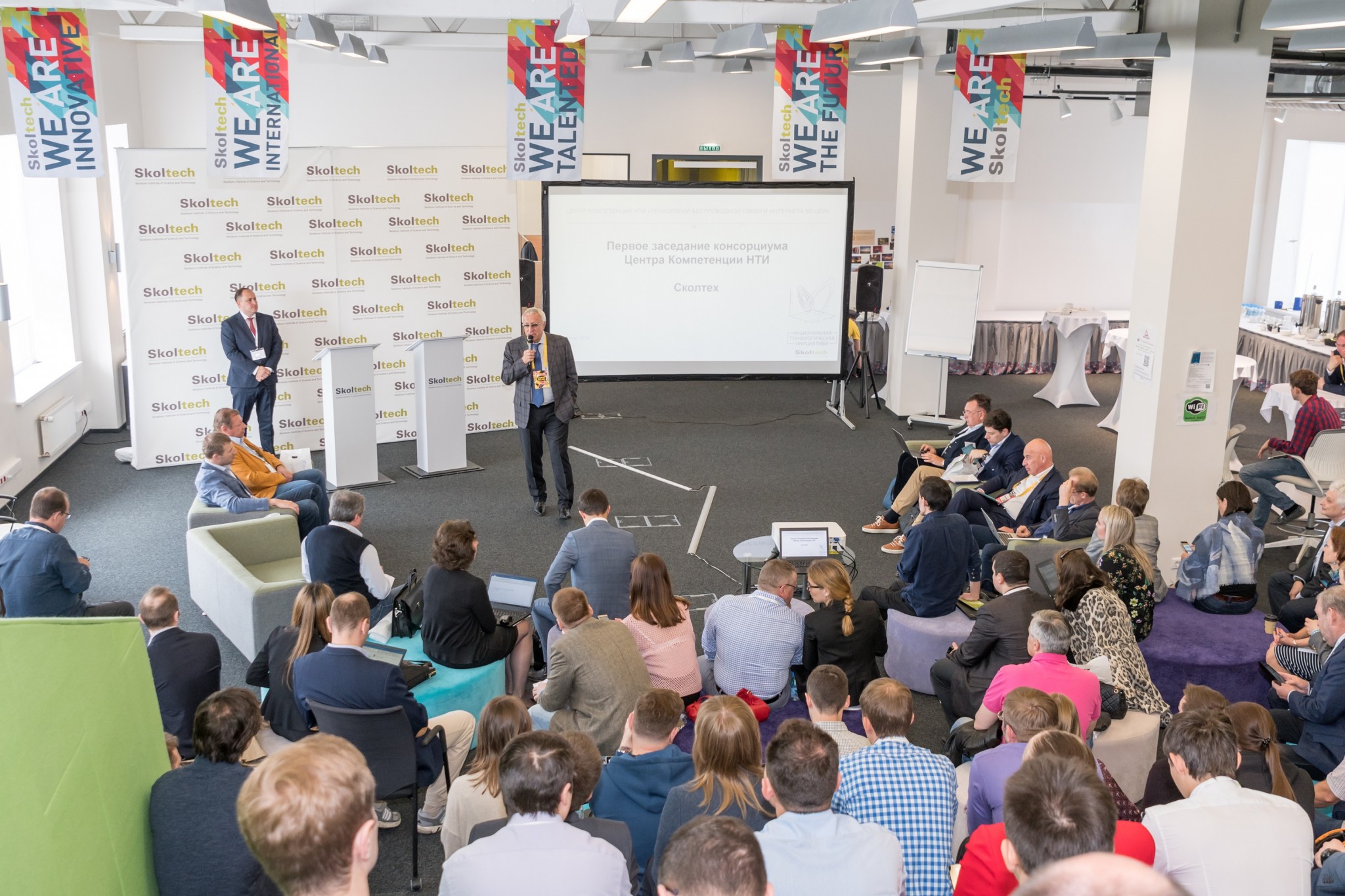 Skoltech President Alexander Kuleshov speaks before a packed house at a signing ceremony for the new IoT center on Friday. Photo: Skoltech.

Skoltech on Friday launched a brand new research powerhouse dedicated to wireless technologies (WT) and the Internet of Things (IoT) – the National Technology Initiative (NTI) Center of Excellence in WT and IoT Technologies.

IoT refers to the interconnectedness of physical devices – from computers and mobile phones to home appliances and vehicles – via the internet. Amid a proliferation of new devices and means of connectedness, this field is growing rapidly.

At a formal ceremony held Friday morning attended by upwards of 100 academics and members of industry, Skoltech President Alexander Kuleshov gave introductory remarks, praising the potential of WT and IoT, and emphasizing the imperative of utilizing the resources of the lab to achieve tangible results. The head of NTI, Dmitry Peskov, also greeted the guests and wished them luck.

Skoltech was selected in the spring by the Russian Venture Company as the winner of a grant to create this center of excellence as part of NTI – Russia’s program for the creation of fundamentally new markets and conditions for global technological leadership of Russia.

The primary goal of the new center will be to provide comprehensive support to Russian companies for purposes of the creation, implementation, global promotion and use of technologies, products and services in the fields of WT and IoT.

In turn, the center plans to foster an environment of cutting edge technological advancements in these fields.

A key part of the strategy of the center is to create, evolve and work closely with a consortium of 10 universities and upwards of 30 members of industry.

Toward this end, Kuleshov signed agreements Friday morning with Tomsk State University of Control Systems and Radio-electronics and the Russian branch of the Big 4 firm KPMG.

The center will be led by CDISE Professor Dmitry Lakontsev. “This is a great opportunity for the development of WT and IoT technologies for both Russian business and the academic community. The consortium of the center already includes the leading universities and companies of Russia and will develop further,” Lakontsev said. Organizers of the center lauded the initiative for putting Skoltech in the position to serve as a key provider and integrator of a broad range of IoT and WT-related competencies, and creating new opportunities for strategic partnerships.

The Skolkovo Institute of Science and Technology (Skoltech) is a private graduate research university situated on the outskirts of the Russian capital. Established in 2011 in collaboration with MIT, Skoltech cultivates a new generation of researchers and entrepreneurs, promotes advanced scientific knowledge and fosters innovative technology to address critical issues facing Russia and the world. Skoltech applies the best Russian and international research and educational practices, with particular emphasis on entrepreneurship and innovation. Skoltech’s model leverages on the integration of basic and applied research and education. The Institute’s close link with the industrial and business ecosystem fosters frontier research and generates a flow of innovative solutions for the benefit of the Russian economy.