Skoltech researchers and their industry colleagues have created a data-driven model that can forecast the production from an oil well stimulated by multistage fracturing technology. This model has high commercialization potential, and its use can boost oil production via optimized fracturing design. The research, supported by Gazprom Neft Science and Technology Center, was published in the Journal of Petroleum Science and Engineering.

Hydraulic fracturing, essentially pumping fluid at high pressures into the reservoir formation, which creates fractures and help bring hydrocarbons to the well and ultimately to the surface, is one of the most widely used techniques for stimulation of oil and gas production. Over the last decades, the technical complexity of HF has grown so much that it now requires extensive design and prior modeling with complex multi-module simulators. 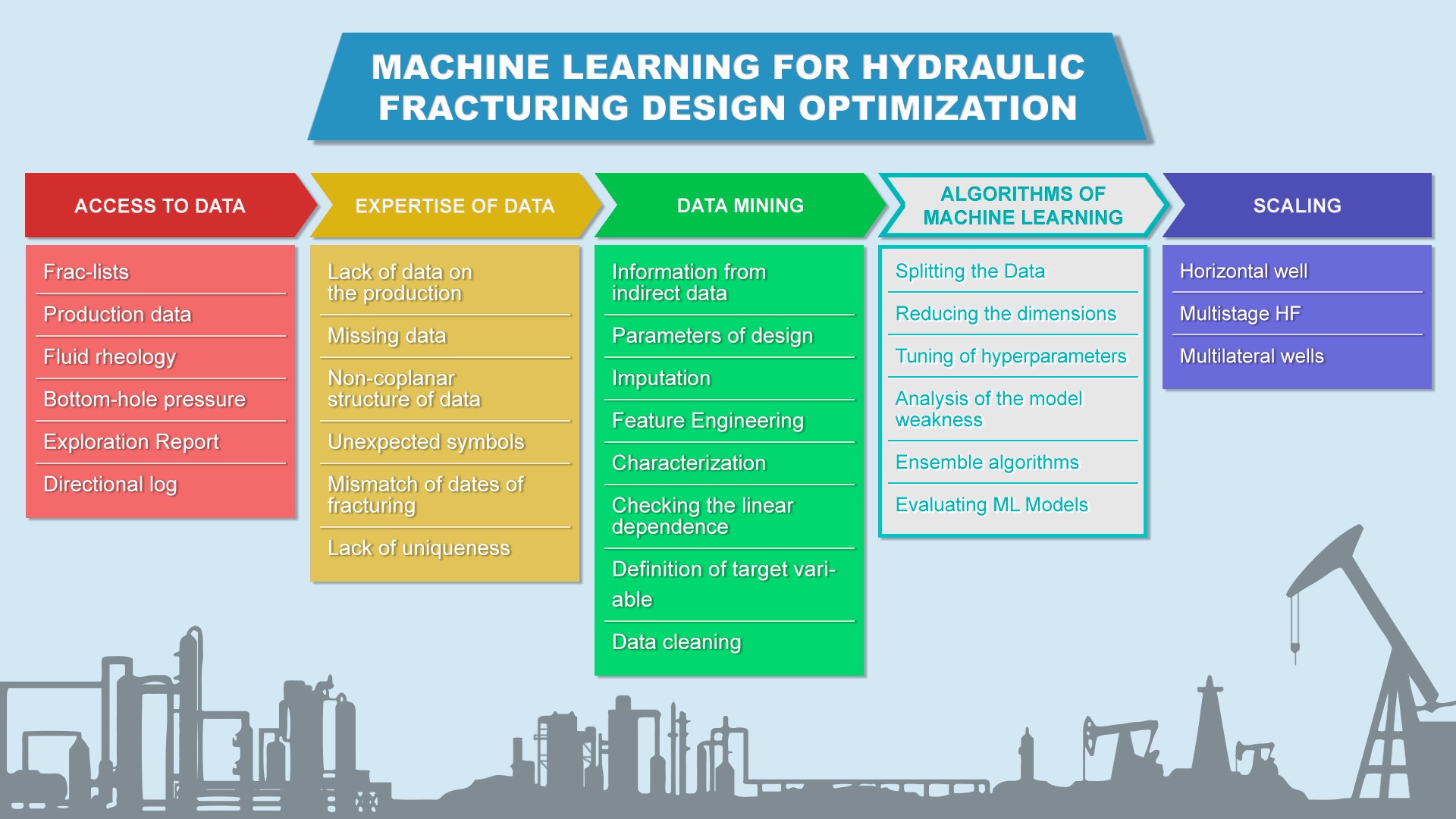 “At the same time, bridging the predictions of these simulators with reality is still a major problem of calibrating, verifying and validating models on real data. Moreover, to close the loop between fracturing simulator and production data, one needs to couple fracturing design modeling with a reservoir simulator, which increases complexity and uncertainty even more. As an alternative, we decided to look right at the field data on frac design and production, which is the measure of success,” explains Professor Andrei Osiptsov, Head of Multiphase Systems Lab at the Skoltech Center for Hydrocarbon Recovery and a coauthor of the study.

Researchers of the M-Phase Lab together with their colleagues at CDISE led by Professor Evgeny Burnaev, head of ADASE group, decided to see whether a data-driven approach to HF design based on machine learning can help address this challenge.

The key component of their project, which was initiated in 2018, is a digital database on fracturing jobs and oil production from some 6 thousand wells in around 20 oilfields in Western Siberia, Russia, within the perimeter of JSC Gazprom Neft. Each data point contains 92 variables on the reservoir, well and the fracturing design parameters as well as 16 oil production parameters.

“We managed to collect and clean up a very big database of completed works on hydraulic fracturing. By applying machine learning methods to this database, we can already predict hydraulic fracturing results with good accuracy, depending on the process parameters. We still have to solve the difficult task of building optimal recommendations for choosing the parameters of the hydraulic fracturing process based on this forecast,” says Professor Burnaev, a coauthor of the study.

Albert Vainshtein, senior engineer and project manager at the M-Phase Lab and a coauthor of the study, notes that the project was “very challenging right from the start” due to ambiguity of real data, high uncertainty and heterogeneity.

“I think that the development of a digital database will allow us to test various hypotheses which, in turn, will clear up multiple hidden patterns of the fracturing processes. As an example, it is important to determine at which injected proppant tonnage our cumulative oil production stops increasing. Depending on the conditions, a common approach is to inject 60 tons per fracturing stage. Using the machine learning model and statistics, we can confirm or reject this hypothesis,” says Anton Morozov, a Skoltech PhD student and research intern at the M-Phase Lab.

Scientists have already produced pilot well fracturing design recommendations based on their machine learning approaches, which have been delivered to the industry partner. They hope an upcoming field-testing campaign will show the potential of their technology for oil production. Still, Burnaev reiterates that there is “quite a large amount of uncertainty in the input data describing the design of a hydraulic fracturing system”. In the next phase of the project, they aim to develop new methods for estimating this uncertainty.

“Working with real field data takes courage and care, as it is very sensitive and requires special handling procedures. It would have been impossible without unconditional support from our technology partner, Gazpromneft Science and Technology Center, and the largest production entity of the operator, Gazpromneft Khantos, which is our ultimate client on this project,” Osiptsov says.

“Our data-driven approach opens an avenue towards a recommendation system which would advise DESC engineers on the optimum set of fracturing design parameters, or at least narrowing down the intervals, where this optimum design can be found,” he concludes.

Grigory Paderin, who leads the Optimal Hydraulic Fracturing project at the Gazprom Neft Science and Technology Center, also noted that this project “is not only a unique scientific challenge aimed at optimizing hydraulic fracturing design, it is also very important for the digitization of processes at Gazprom Neft. It allows us to take a new look at the value of our data and to reconsider our attitudes towards collecting, storing and processing this data.”