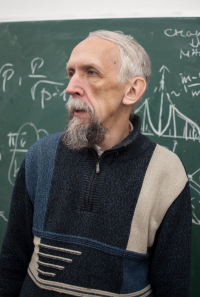 The autumn-winter season of Math walks opened up with a conversation of Mikhail Gelfand with the Chief research scientist, MIAS, Head of the Moscow Mathematical Society, RAS Academician Victor Vasilyev.

The talk started at the Gogolevsky boulevard, and continued in the lecture rooms of the Moscow Independent University. What the two professors talked about – read in the coming issues of the ‘Troitsky variant – Nauka’ newspaper.