On July 13, 2016, in accordance with the agreements made during the St. Petersburg Economic Forum, a representative delegation of PJSC “Bashneft“, headed by the President and the Chairman of the Board of PJSC “Bashneft” Alexander Corsica, visited the Skolkovo Innovation Center and Skoltech. END_OF_DOCUMENT_TOKEN_TO_BE_REPLACED 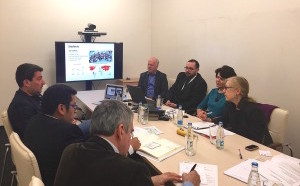 A delegation from the French Petroleum Institute – IFP School – visited Skoltech on March 29th to discuss joint projects in the field of education and research programs. This visit is another step in the tightening relations between Skoltech and France, after the visit of the French Minister of Economy, Industry and Digital Affairs, Mr. Emmanuel Macron at Skoltech two months ago.

The french delegation was led by Director of the Center of Economics and Management at IFP School, prof. Nadine Bret-Ruza and included Vladimir Alejandro Cheque-Flores, Program supervisor, and Prof. Sylvain Boyer. After a general presentation about Skoltech, given by Alexei Sitnikov, Vice-President for Institutional and Resource Development, the guests were acquainted to Skoltech Center for Energy Systems by Prof. Alexander Ustinov, its associate director, and to the Center for Hydrocarbon Recovery by Dr. Alexei Cheremisin, the center’s associate director. After the presentations and discussions, the guests visited the centers’ labs.

Based in Rueil-Malmaison, IFP School was founded in 1954. Its forerunner was the oil laboratory set up after the First World War University. Today, IFP School is part of the French Petroleum Institute (IFP), which specializes in technical training, research and management education for the needs of oil, gas and chemical industries, as well as in the field of propulsion systems engineering. The school graduates approximately 600 students per year in 20 graduate programs (10 in English), employing 40 regular professors and 350 instructors from industry