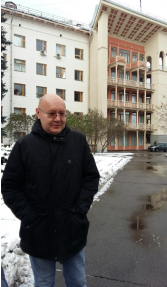 Sergey Konstantinovich picked the Leninsky Prospect neighborhood for a stroll. The conversation touched upon not only the operation of the Russian-French Laboratoire J.-V.Ponselet (starting from January 2017 it will turn into the International Multidisciplinary Scientific Centre of J.-V.Ponselet). In the ‘Aktualnaya Matematika’ video section at postnauka.ru mathematician told about and demonstrated what ‘Collective methods in topology’ mean.

Here’s the longread to read.