Scientists from the Skoltech Center for Energy Science and Technology, the Institute for Problems of Chemical Physics of RAS, and the Department of Chemistry of MSU recently presented solar cells based on conjugated polymers and fullerene derivatives that demonstrated record-high radiation stability. Their ability to withstand gamma radiation of >6,000 Gy raises hopes for their stable operation in near-earth orbit for a period of 10 years or even longer. The results of the study were published in ACS Applied Materials & Interfaces. 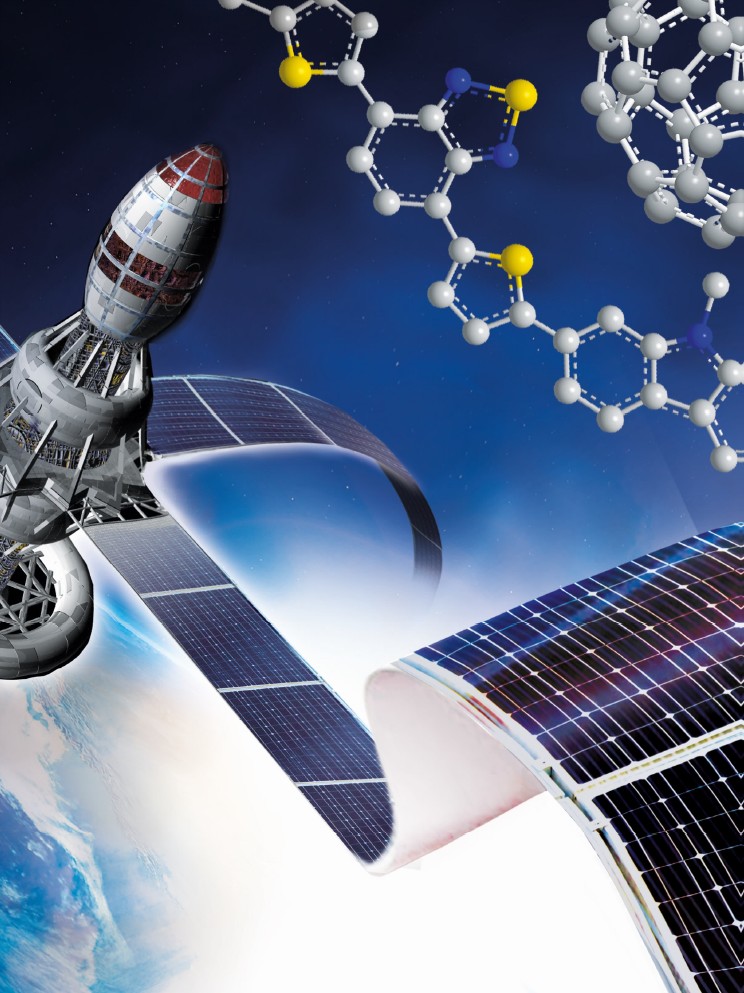 When the Soviet Union launched the first-ever satellite some 60 years ago, its radio signal transmitted at three frequencies that could be captured anywhere on Earth. However, three weeks later the transmitter went silent, having consumed all the power provided by the onboard batteries, which accounted for the larger part of the satellite’s weight. A lesson was learned from the first launch and all satellites that followed carried solar cells that convert the light energy into electricity to power the onboard electronic systems. Silicon solar cells and photoelectric converters based on the elements from groups 3 and 5 of the periodic table (A3B5) are the most common varieties despite their multiple drawbacks, including heavy weight and, therefore, a low energy-to-weight ratio. To top it off, they are fragile and easily affected by ionizing radiation: unlike high-energy particle flows that can be fended off by encapsulation, gamma rays have a high penetrating capability and are more difficult to manage. The formation and accumulation of radiation-induced defects in a crystal structure of conventional inorganic semiconductors cause severe degradation of their electronic properties and quick decay of the solar cells’ efficiency.

Over the past two decades, organic solar cells have garnered much attention thanks to their light weight, flexibility and unprecedented energy-to-weight ratios of 10 to 20 W/g, making them a promising candidate for space applications, although their radiation stability is still poorly understood.

Earlier, a group of researchers led by Skoltech’s Professor Pavel Troshin studied the radiation stability of perovskite solar cells and showed that current generation complex lead halides are too sensitive to g-rays to be used in space. The researchers were far more optimistic about the organic solar cells, which exhibited excellent radiation stability in their recent study.

“The carbazole-containing conjugated polymers selected for the study ensure a long operation lifetime and fairly high light conversion efficiency of solar cells under standard terrestrial conditions, as we demonstrated back in 2015. In this paper, we examine the behavior of two model fullerene-polymer systems exposed to g-rays. One of the two systems displayed record-high radiation stability, with the solar cells retaining over 80% of their initial efficiency after exposure to 6,500 Gy of g-rays ‒ a dose that near-Earth orbit satellites are estimated to receive over a period of 10 years or longer. This is just one of our first achievements in this research thrust and we will pursue the development of even more stable and efficient organic solar cells for space applications,” says the first author of the paper, Ilya Martynov.

The high radiation stability revealed by organic solar cells based on carbazole-containing conjugated polymers is indicative of their extensive space potential, with their light weight, flexibility and high energy-to-weight ratio enabling a significant reduction in the ballast weight and increase in the payload.

“Deploying space solar sails made of flexible plastic solar cells represents an enticing opportunity for ramping up the power of photoelectric converters on the satellites,” says Prof. Troshin.