The Skoltech Board of Trustees voted Monday to approve transformation plans that encompass an overhaul of the Institute’s center structure and a revised HR policy.

Board Сhairman Viktor Vekselberg commented: “In a month, Skoltech is turning 10, and at this point in our history, we are making a proactive effort to adapt to the new challenges that Russia and the international industrial and academic community currently face. The progress made by Skoltech during its first decade is impressive. One of Russia’s youngest universities has become one of the best universities globally, according to the most reputable ratings. Last year, we overcame the challenge of offering high-quality education online, thus pronouncing ourselves once again as a technology-empowered institution. No matter what challenges may be there for us, I am certain we will meet them fully armed, and I strongly believe that a big future lies ahead of us.”

On Tuesday, the Skoltech leadership presented the upcoming changes to the community at an all-hands meeting. 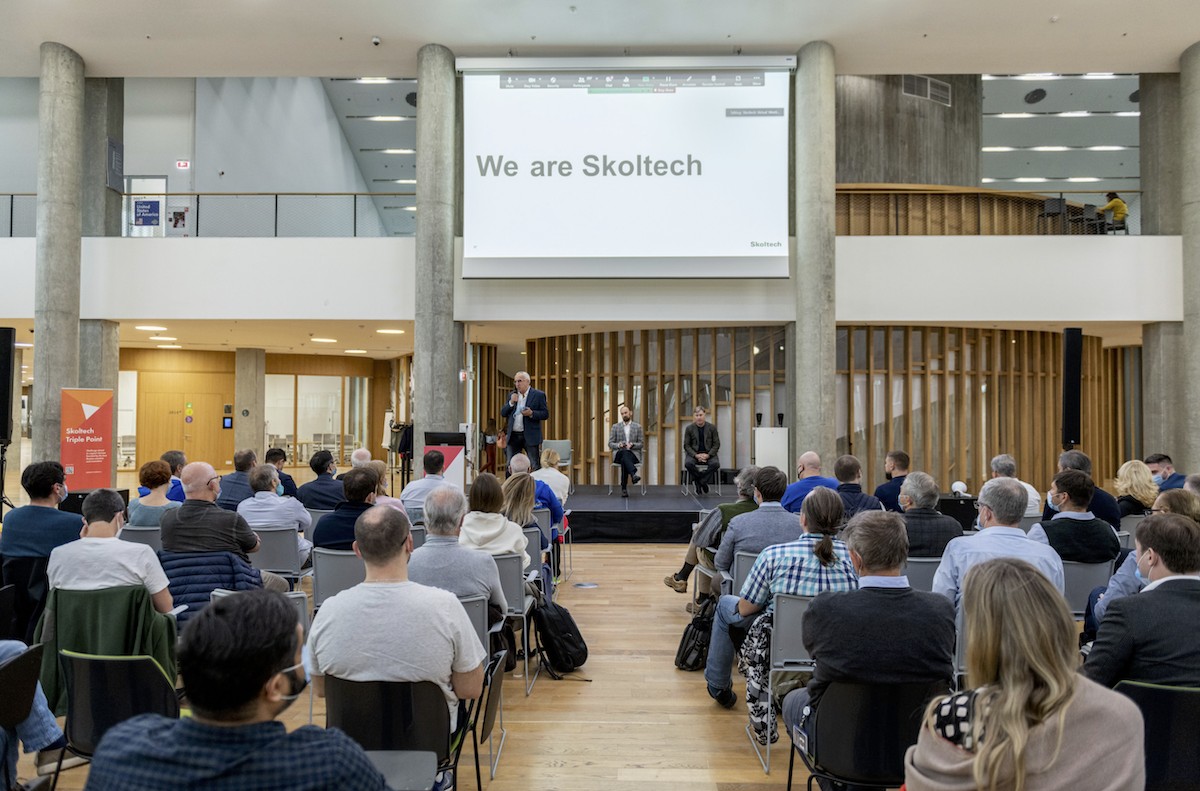 The move comes as a result of over eight months of discussions focusing on possible improvements to center structure. The talks began in January and featured a series of seminars and workshops. A call for relevant proposals and ideas was made, with every faculty member encouraged to contribute to the effort, which culminated in early September at a meeting of the Academic Council, lasting for the entire day — “to go over all the proposals we got from the faculty and the leadership,” President Kuleshov recounted.

“Over the last 18 months, one of the greatest challenges was going online, but we’ve still had tremendous success with both the master’s and the PhD student graduation,” Provost Keith Stevenson began his presentation, moving on to discuss graduate employment, attracting international students in the pandemic era, and the Skoltech-MIT collaboration.

The provost cited a study that found Skoltech to have contributed 12% of all Cell, Nature, and Science papers originating in Moscow between 2016 and 2020. He said the Institute’s contribution is also evident in how Moscow has been gaining more recognition as an innovation-driven city.

Kuleshov took over the floor to highlight some of the other achievements of Skoltech, among them participation in nationwide projects, “We have to be nation-size leaders and produce ‘elephants,’ not ‘rabbits.’” The president referred to the recent Guide2Research ranking of top 1,000 organizations in computer science. “Skoltech is the only Russian organization that made the list. The only one,” he stressed. “And it’s merely the seventh year of our existence.” He also mentioned the Institute’s solid standing in the Nature Index, as well as massive representation at A*-rated AI conferences, where Skoltech is contributing an impressive 40% of all Russian publications. The president went on to name examples of technological solutions originating at Skoltech, including Russia’s first 5G base station and lithium- and sodium-ion battery cathodes.

“Achievements are the only arguments,” the president summed up, citing the above as the guiding principle behind the new transformation. “We want to extend the traditional center structure. We will complement traditional centers with project centers.” He explained that this new type of center emphasizes problem-driven research, prototype development, and technology scaling and transfer toward industrial applications. The Institute’s renewed structure incorporates ten CREIs and three project centers. 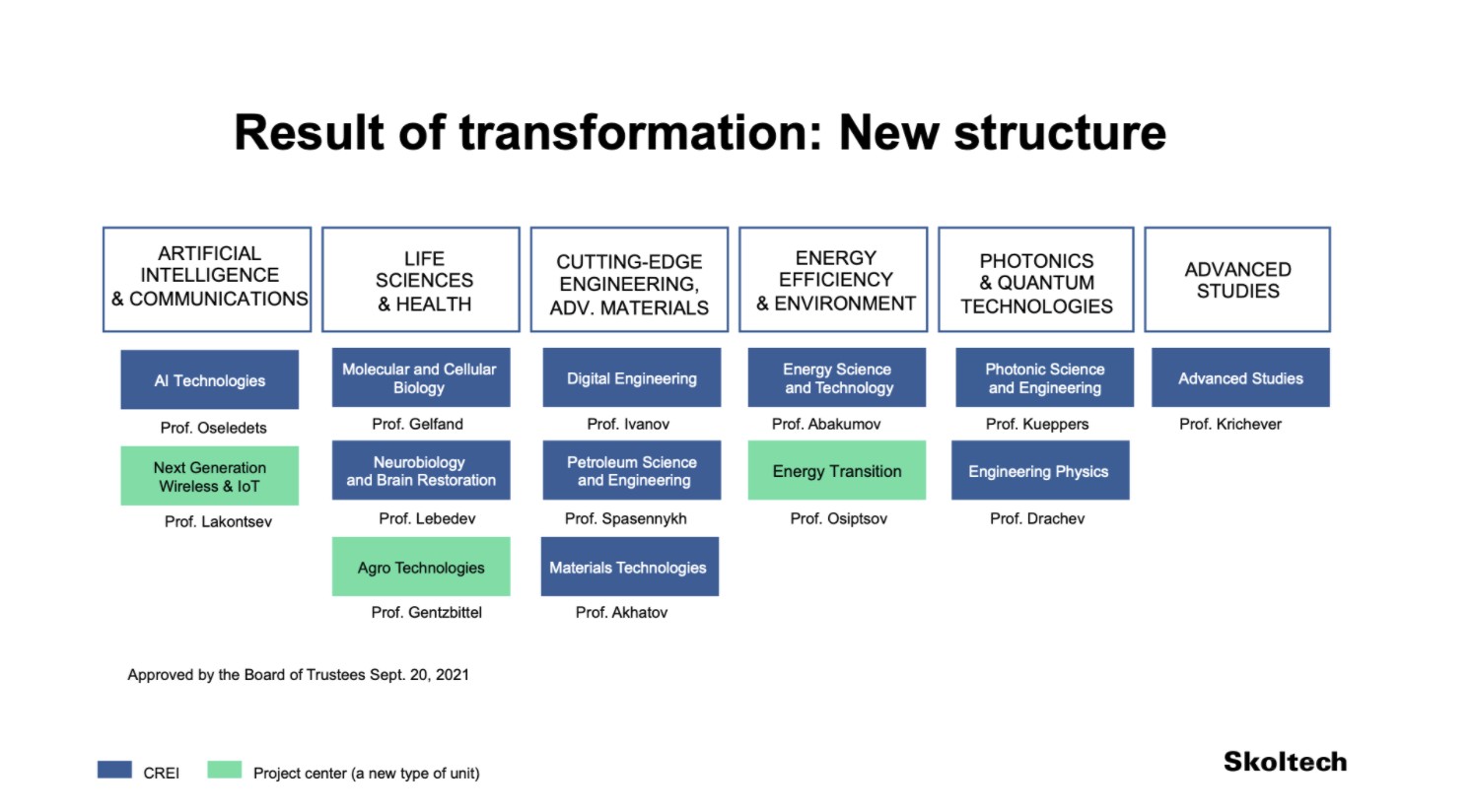 According to the leadership, operationalizing the transformation will depend on the HR policy, overall major policies, budgeting, and the infrastructure. Focusing on the first aspect of the four, Vice President for Development Alexander Safonov continued the presentation.

“Many people know Skoltech as an innovation hub, but we need to advance the brand of Skoltech as an employer,” he explained the updated human resources policy. “We have experienced rapid growth in recent years, now it’s time to transfer from transactional to strategic HR. We want people to be proud to work at Skoltech.”

“We grow strong. We grow together,” the leadership concluded. 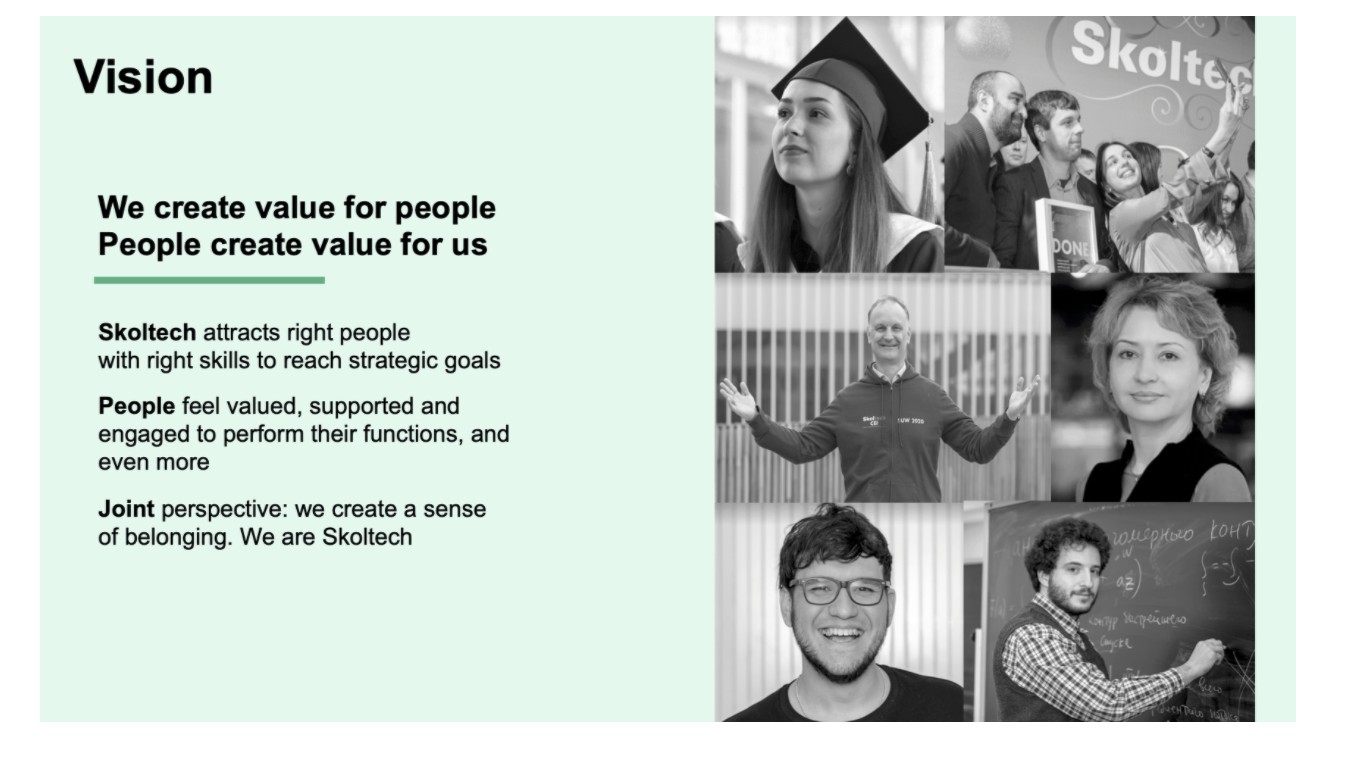