Researchers from Skoltech, MIPT, Russia’s State Research Institute of Civil Aviation, the University of North Texas, and York University have simplified and automated the lab procedure used to test anti-icing fluids that ensure safe aircraft takeoff. The findings of the study, which was supported by the Russian Science Foundation, are reported in the journal Cold Regions Science and Technology. 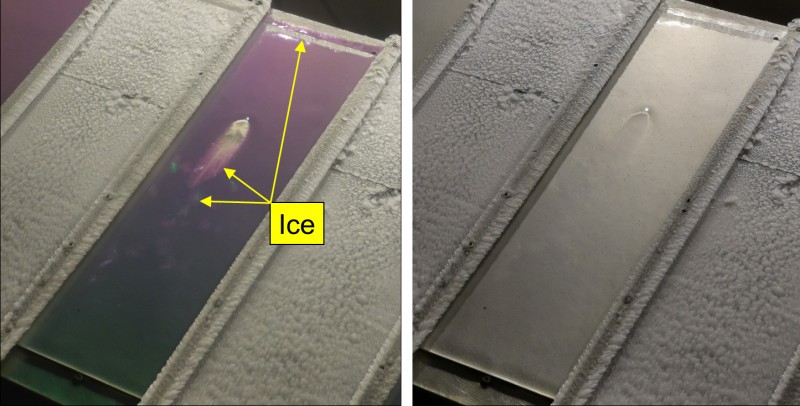 Image. Ice forming on an aluminum plate in a weather chamber as seen with the approach proposed in the study (left) and with the naked eye (right). Credit: Viktor Grishaev et al./Cold Regions Science and Technology

Frost, snow, and ice accumulation on an aircraft adversely affects its handling properties and increases the risk of accidents by distorting the flow of air over the wings, reducing lift, and creating additional drag. To prevent hazardous icing, the aircraft is treated before takeoff with deicing fluids that melt away any ice or snow that have stuck to the metal, and with anti-icing fluids that form a protective film on the plating to prevent further ice formation.

Since anti-icing treatment is so important for ensuring flight safety and there are many factors at play — fluid dilution, ambient temperature and humidity, wind, precipitation, aircraft skin material, etc. — anti-icing agents are frequently tested in labs so as to know their properties in every detail. This is a tedious process that involves a specialist visually inspecting a piece of aluminum plating treated with an anti-icing fluid in a climate chamber that reproduces the necessary weather conditions.

“For example, a lab assistant might need to gauge how long it takes before 10% of the metal surface is covered with ice. Now, this is fairly difficult and subjective, because ice does not necessarily expand from a single origin on the sheet but rather it could form and grow in many places, in an insular fashion. In that case, determining when the 10% mark is reached is a judgment call for the assistant,” said Viktor Grishaev, who is a senior research scientist at Skoltech and the principal investigator of the study.

“This is exacerbated by the fact that it is actually quite challenging to distinguish visually between bare aluminum and iced areas, to the point that people sometimes resort to poking the plate with a toothpick to make sure,” the researcher went on. “It has to do with the very low contrast of ice on aluminum, and this is precisely the problem we have addressed.”

In their paper, Grishaev and his colleagues suggest that plates in the chamber be illuminated with a polarized light source and observed through a polaroid film. That way icy areas are much easier to discern, the team shows (see image). Since such a light source and a polaroid are readily available and inexpensive, the trick promises to make the life of lab assistants testing anti-icing fluid performance way easier at next to no cost and with little additional hassle involved.

The polarization trick enabled researchers to do even more than that, though. While the current standards approved by regulatory bodies prescribe tests carried out by human experts, soon this job could be done by computers — with greater accuracy, reliability, and consistency. Low ice contrast has been among the main obstacles preventing automation. Now, Grishaev and his co-author have used a simple algorithm and a camera with a polarizing filter lens to detect ice by analyzing footage from the weather chamber.

“In a laboratory setting, even with that simple algorithm, computers could outperform humans in this task already today. But perhaps someday we would have cameras in airports that detect ice forming on airplanes preparing for takeoff in real time and alert the crew when additional anti-icing fluid treatment is in order,” Grishaev concluded.