In the first detailed genomic study of the HIV-1 epidemic in Russia, scientists from Skoltech, the RAS Institute for Information Transmission Problems, the Central Research Institute of Epidemiology, and Oryol Regional AIDS Center report on the data they obtained by sequencing viral samples of about a third of all infected individuals in Oryol Oblast, a province in the west of Russia. The team hopes its observations will be used to maximize the efficiency of local HIV/AIDS control and prevention policies. The study came out in Virus Evolution.

The World Health Organization classifies HIV/AIDS as a global epidemic. Effective policies for controlling the spread of HIV/AIDS should consider distinct features that characterize the epidemic in any given country or region. For instance, the distribution of new HIV diagnoses across transmission routes can inform health care specialists and policymakers about the key affected risk groups so they can develop an appropriate response strategy.

In some countries, the structure of the epidemic is additionally refined by genetic data produced by molecular surveillance which is routinely used to predict drug resistance. This so-called “molecular epidemiology” allows researchers to identify growing transmission clusters more effectively, describe these clusters in terms of their growth rate, transmission route and sex composition, and reveal the spread of drug-resistant mutations across the population.

With as many as 100,000 new HIV cases officially reported annually in Russia and over 1% of the entire adult Russian population infected, the virus poses a substantial threat to public health in the country. Molecular epidemiology could help to tackle the epidemic but its methods are currently inapplicable as viral genetic data are only available for fewer than 1% of the reported HIV cases in Russia.

Focusing on a small province in the west of the country — Oryol Oblast, which is home to 725,000 Russians — a research team led by Professor Georgii Bazykin of Skoltech examined the epidemic “in miniature,” sequencing a clinically important part of the viral genome in about one-third of the region’s HIV-positive population.

The genome of HIV consists of nine genes. One of them, pol, encodes three proteins that are targeted by antiretroviral drugs, making this gene the most clinically important region of the genome due to the associated drug-resistance mutations, which may result in therapy failure. Thus, around 30% of the HIV genome usually gets most of the attention, and in the Oryol study, the researchers sequenced about half of that region.

HIV has two distinct types: HIV-1 and HIV-2. Most of the time you hear about HIV, including in this study, it’s what’s technically known as HIV-1 — the predominant species worldwide. Within HIV-1, four instances of animal-to-human transmission have been described. Each produced a separate group, usually labeled with a letter. Of those, only group M is widespread while the other three are rare.

The predominant group M is made up of genetically diverse clades, or subtypes: A, B, C, etc. For historical reasons, the distribution of subtypes across geographic areas is not uniform. For instance, while subtype B dominates the epidemics in the U.S. and Western Europe, it plays a limited role in Russia, where subtype A is driving the epidemic. Furthermore, distinct subtypes simultaneously circulating in the same area occasionally produce recombinant forms. To identify a subtype or a recombinant form with reasonable accuracy, it is enough to sequence a pol gene fragment.

The epidemic in Oryol is mainly represented by three genetic variants of HIV-1: subtypes A (87%), B (2%), and the so-called circulating recombinant form 63 (CRF63, 7%), which resulted from a recombination event between subtype A and another genetic variant. Subtyping allows researchers to link genetic variants to preferrable transmission routes. For instance, the predominant genetic variant — subtype A — is associated with heterosexual transmission and injecting drugs, and that agrees well with the official epidemiological data on the Russian HIV epidemic affecting mostly heterosexual population. In turn, subtype B, historically associated with the homosexual transmission route, is indeed enriched with patients who reported homosexual contacts.

The researchers also considered how many times and when the virus entered Oryol Oblast. For that, they placed Oryol sequences in the phylogenetic context of HIV sequences collected outside Oryol and identified groups of Oryol samples descending from samples collected elsewhere (fig. 1). They estimated HIV to have been introduced into Oryol Oblast on more than 300 separate occasions over the last 20 years. Of those, 80 cases resulted in traceable viral transmission chains. The team used the identified introductions of subtype A to infer the reproduction number R of the subepidemic driven by the predominant subtype. This metric reflects how many people an infected person infects on average.

“We estimated that on average, one primary infection produces 2.8 secondary infections, which implies a moderately growing epidemic,” said the study’s lead author, Junior Research Scientist Ksenia Safina from Skoltech and the Institute for Information Transmission Problems of RAS. 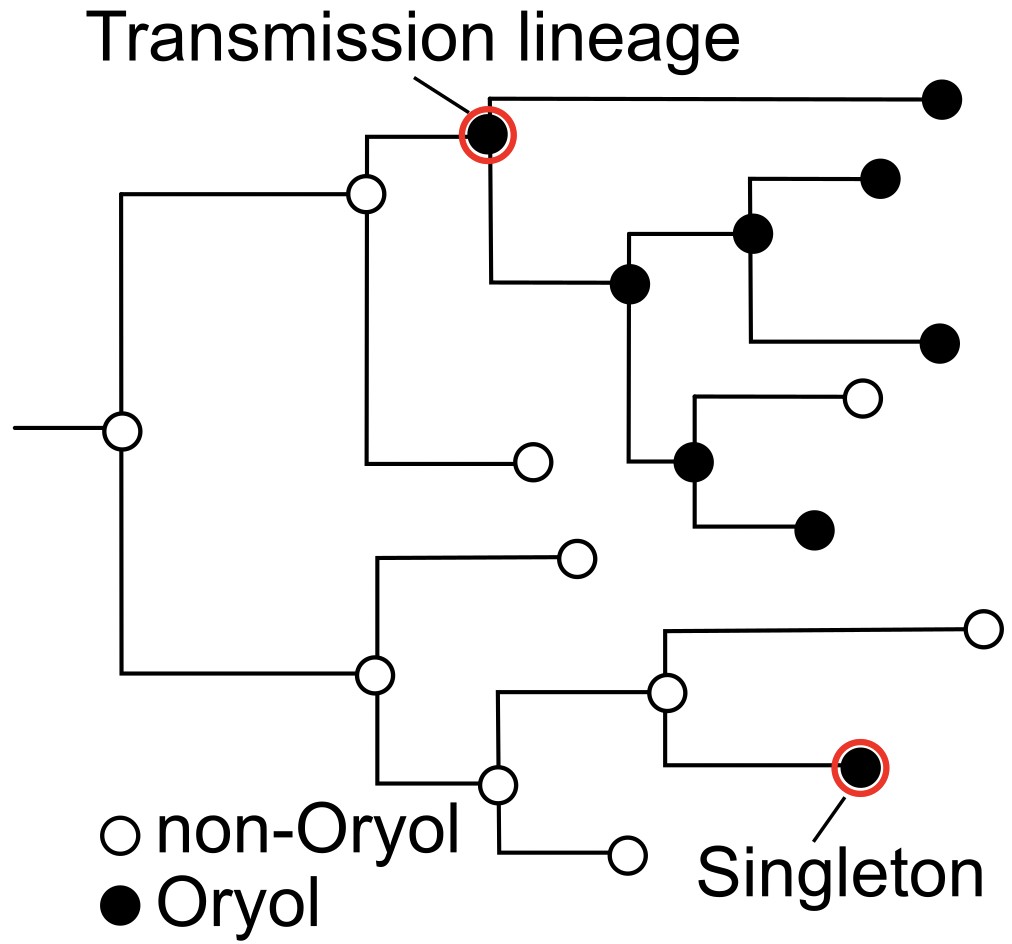 Figure 1. Identification of Oryol transmission lineages and individual infections (singletons) resulting from distinct introductions of the virus into the region. Credit: Ksenia Safina/Skoltech and IITP RAS

“The increase in the number of infections that we see in Russia leads to the fact that the scale of the epidemic continues to grow. This is primarily due to insufficient coverage of antiviral therapy. WHO is aiming for a so-called “95-95-95 strategy” that requires at least 95% of people diagnosed with HIV infection to receive antiretroviral therapy. In Russia, this share is still low. Therapy prevents the virus from being transmitted, and its absence leads to more and more people getting infected,” says Bazykin.

One of the identified introductions is of particular interest. Quite unexpectedly, the team observed that a very recent introduction of the recombinant form CRF63 led to a huge number of infections (see fig. 2). The comparison of CRF63 and subtype A strongly suggests more rapid growth of the CRF63 cluster compared to the general epidemic governed by subtype A. The reasons behind this are unclear. Several possibilities exist, not mutually exclusive. First, the recombinant variant may indeed possess a different biology, e.g., a higher infectivity. HIV variants differ from each other in terms of viral loads, therapy responses, and disease progression rates as reported by prior research. CRF63 is a relatively young variant that has not been studied experimentally yet, so for now this possibility remains open. Second, rapid growth can stem from epidemiological differences between CRF63 and subtype A. CRF63 entered Oryol Oblast later compared with most subtype A introductions so it is on average younger than subtype A infections. People are known to infect others much more often — on average — during the first several months after contracting HIV. Thus younger CRF63 infections may be transmitted more efficiently.

Additionally, a comparatively small fraction of the people infected by the recombinant variant are known to receive therapy, which is also a sign that this infection wave is more recent: The disease, it seems, has not advanced to the point when most of those affected can no longer delay seeking treatment. Besides that, the recombinant variant carries a high fraction of injecting drug users, which could also contribute to higher infection rates.

Figure 2. The recombinant form CRF63 is unexpectedly large for its age. This plot shows the dependency of the number of Oryol samples resulting from an introduction on the inferred date of introduction. The red dot in the upper right part of the plot corresponds to the introduction of the recombinant variant sometime around 2014. Credit: Ksenia Safina et al./Virus Evolution

The team hopes its observations will help the AIDS centers to control the epidemic more efficiently. “Whatever the reasons are, our findings on CRF63 are still of high importance as the recombinant cluster can heavily affect the epidemiological situation in Oryol Oblast and beyond. It should be closely monitored, and transmission chains should be disrupted,” Bazykin commented. The researchers have reported the rapidly growing recombinant cluster to the AIDS center in Oryol; they are planning to start an epidemiological investigation shortly, interviewing people from the cluster, establishing and testing their contacts. The group is planning to continue this project by collecting and analyzing new Oryol samples nearly in real time and reporting actively growing clusters to the AIDS center. If successful, this will become the first project in Russia to prove the utility of the molecular epidemiology framework for tackling HIV.

The study reported in this story was funded by the Russian Science Foundation; Project No. 21-74-20160.