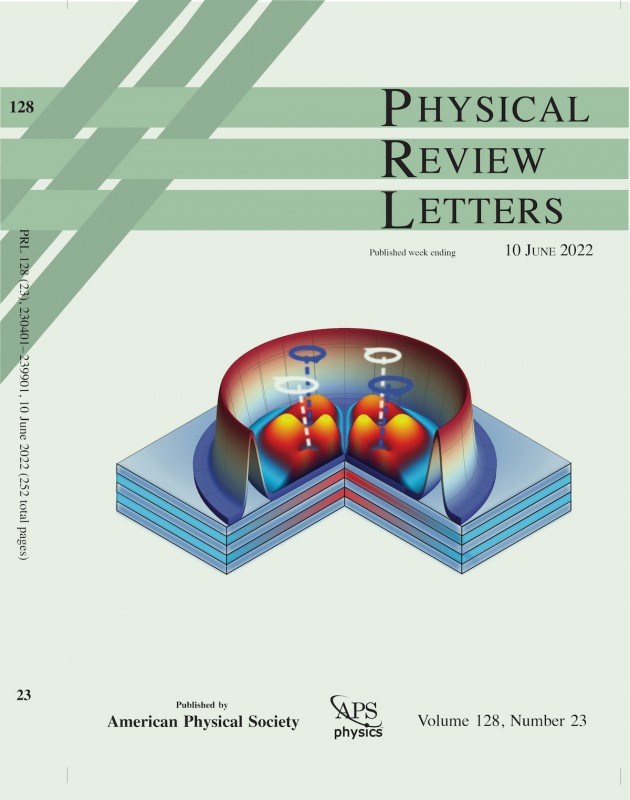 Researchers from Skoltech, the University of Iceland, and the University of Southampton have demonstrated the formation of an odd never-before-seen entity from the realm of quantum physics: a cluster of optical vortices with periodic charge flipping. Fundamental studies of optical vortices hold the promise of applications in optical microscopy, quantum cryptography, enhanced-bandwidth optical communication, analog computation, and optical tweezers tech. The research was published in Physical Review Letters and featured on the issue cover.

An optical vortex is light twisted like a spiral around its axis of propagation. Projected onto a flat surface, it appears as a ring with a dark spot in the middle. A vortex has a so-called topological charge, which you can think of as a number denoting how fast it is spinning and in what direction.

The recent study reports how its authors managed to induce four such vortices as a cluster and detected that their charges varied in a regular manner, switching with a period of one-fifth of a nanosecond. While optical vortex clusters or lattices had been observed before, such fast charge oscillation is reported for the first time.

Optical vortices as such offer an intriguing opportunity to overcome the bandwidth limitation of fiber optic communication lines. There are only so many transmission channels you can pack in an optical fiber, meaning there’s a limit on bandwidth. However, two vortices even at the same wavelength of light could be distinguished by their charge, so in a way they occupy distinct channels. Such channel “multiplication” is known as multiplexing.

Another exciting application is optical tweezers. These are specially prepared laser beams for holding or manipulating microscopic objects such as atoms, nanoparticles, or even biological cells. Used since the 1980s, this tweezer tech could be enhanced using optical vortices, which would enable trapping an object in a ring of light and rotating it, thanks to the spinning nature of the vortex.

How to create an optical vortex cluster with periodic charge flipping

The experiments were conducted in Skoltech’s Hybrid Photonics Laboratory, led by Professor Pavlos Lagoudakis, the Institute’s vice president for photonics. The vortices in the study were generated in a system known as microcavity exciton-polaritons.

In the experiments, the researchers used a semiconductor microcavity structure — two highly reflecting closely spaced mirrors with quantum wells sandwiched in between. This allows for the light localization and strong interaction with the semiconductor medium, giving rise to quasiparticles referred to as polaritons — coupled states of the electrons and holes in the material and the photons in the incident laser beam.

“The catch was we had to make sure that the charge of each vortex was random to begin with, and would evolve freely according to the condensate quantum dynamical rules. This means the system would spontaneously self-arrange its vortices, implying emergent behavior. So we couldn’t just imprint a vortex lattice into our system with a laser, because that would create vortices with known charges and remove any spontaneity,” the first author of the paper, Skoltech PhD student Kirill Sitnik, commented.

“We excited polaritons with a ring-shaped laser beam. At the critical excitation power, some of the polaritons localized inside an optically induced effective trap, occupying a superposition of macroscopic quantized states with self-arranged vortices oscillating in a periodic fashion,” the study’s PI Pavlos Lagoudakis said.

The study reported in this story was funded by the Russian Foundation for Basic Research; Project No. 20-32-90128. Besides Kirill Sitnik and Pavlos Lagoudakis, the research team included Research Scientists Sergey Alyatkin and Tamsin Cookson, and PhD student Ivan Gnusov of Skoltech, and Research Fellow Helgi Sigurðsson from the University of Southampton and the University of Iceland.