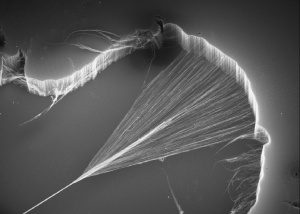 Carbon nanotubes being spun to form a yarn. Image courtesy of CSIRO ScienceImage and WIkipedia

Skoltech would like to invite you to the next Solid State Physics seminar, which will take place on 29 October, Wednesday at 16:30 in lecture hall Beijing-2, Moscow School of Management 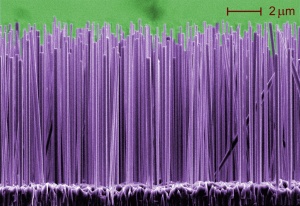 Growing nanowires is a delicate and complex process. Now a Skoltech researcher teamed up with international scientists to reveal a new way to monitor and guide growth by using the material’s defects. Image courtesy of nist.gov

Nano-wires have fascinated and intrigued researchers for decades. These extremely thin and elongated structures (10−9 meter) are considered to be promising materials for high efficiency electronic devices. They are particularly useful in chemical and biological sensors, solar cells, field emission devices, and lasers. But crucial parts of the process that guide their growth remained a mystery. Now Professor Albert Nasibulin, a researcher at Skoltech, teamed up with colleagues from Denmark and Finland to reveal new facts about the behavior of nano-wires during metal oxidation: the process occurs without catalysts and is guided by planar defects. Simply put, faults serve as both guides and engines for growth. The researchers published their findings in the scientific journal Nano Letters. These could help future efforts to control the properties of nano-wires.

High yield nano-wires have applications in batteries and transparent conductive electrodes. Their use as tribological (interacting surfaces) additives is also high on many scientists priority list. Despite a wide scientific interest, nano-wires synthesis is usually limited to just a few methods in which a catalyst, namely gold nano-particles, plays the main role. In contrast, non-catalytic methods produce purer nano-materials and could minimize the number of technological steps required for their production.

However, the process underlying nano-wire growth without a catalyst remained unknown. Moreover, it was widely disputed if any nano-scale wire growth is possible without using nanometer sized particles as guides. 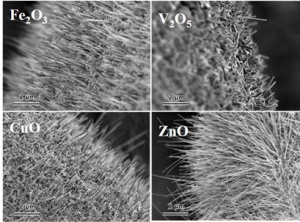 In the past, researchers from Aalto University (Finland) proposed a novel method to grow metal oxide nano-wires without a catalyst, by simply oxidizing pure metals in air (Figure 1). However, the mechanism guiding their formation was not fully understood. Latest advances in electron microscopy allow for closer examination of chemical reactions without disrupting them.

Yet recently Prof. Albert Nasibulin of Skoltech (Skolkovo Institute of Science and Technology), Dr. Simas Rackauskas of Aalto University (Finland), and researchers from Kemerovo State University and the Technical University of Denmark have achieved a breakthrough: they examined in situ nano-wire growth.

The researchers synthesized CuO (Copper Oxide) nano-wires by oxidizing samples of pure copper inside a transmission electron microscope. Then they have been able to observe and follow the complete process of nano-wire formation. The atomic level investigation shows how layers of Copper Oxide are organized at the tip of growing nano-wire. They nucleate only at the specific position on the surface, which is associated with planar crystal defects known as twin boundaries.

Thus, the study unambiguously showed that nano-wire growth might occur without catalyst particles. Moreover, these observations reveal that all nanowires contain defects, which are crucial to guide the materials’ growth.

The nanowire growth starts from the atomic layer nucleation at the crystal defect (twin boundary) and continues forming a long range ordering along the defect. The figures show TEM images revealing the twin boundary defects in the nanowire crystal and the mechanism of its layer-by-layer growth (Source: Nano Letters. Article ASAP DOI: 10.1021/nl502687s).

In the future, one can expect this work to be the starting point of a new approach. Defects could be used for nano-wire growth control. Consequently, they can even help shape the materials’ geometry, in a similar way to the catalyst assisted method (Figure 2).

“Catalyst-free methods are attractive for facile fabrication of pure nano-wires without the need for catalyst preparation and subsequent purification of the produced material”, suggests Prof. Albert Nasibulin of Skoltech. “Now, when the mechanism guiding the nano-materials growth without catalysts is understood, the next step is controlled synthesis of pure nano-wires with specific properties for their mass application”.

The results have been recently published in the scientific journal Nano Letters.