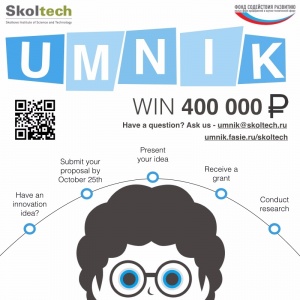 UMNIK is a special program supporting young high-tech startups in five fields for a duration of 2 years.

Can an innovation project benefit from 400k ruble worth of seed funding? Of course.

And now there’s a new way to win such support: UMNIK.

UMNIK (meaning ‘smart guy’ in Russian) is a program supporting young high-tech startups (led by Russian citizens) in five fields for a duration of 2 years. This year, for the first time in UMNIK’s history, Skoltech administers the competition from collecting and selecting initial applications to hosting the national final in October.

Winners will be awarded grants, funded by the Foundation for Assistance to Small Innovative Enterprises in Science and Technology (FASIE). Skoltech graduate Dmitry Smirnov won the grant in 2013 for the development of an external combustion engine, a project which has grown to become a company called “Thermal Motors”.

The program aims to support students, post-docs and researchers based in Russia who develop innovative startups in the following fields:

Apply now to turn your SME into a big success story: http://umnik.fasie.ru/skoltech/ 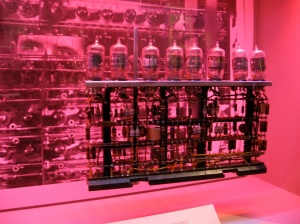 One of the biggest challenges science-based startups face is overcoming financial issues. In other words: the ‘show me the money’ problem. If this piques your curiosity, please join us for a seminar with Dr. Benoit Leleux, titled  “A (Non-Random) Walk Down Entrepreneurial Alley”. 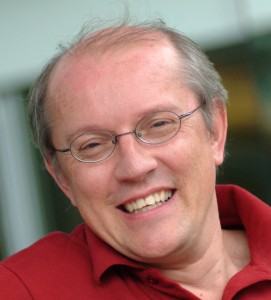 In the talk Dr. Benoit Leleux will review his 25 years of research, practice and teaching in entrepreneurship around the world, focusing in particular on growth financing issues faced by technology firms.  He will review quickly the findings of his 2008 book “Nurturing Science-Based Startups” based on 30+ award winning clinical studies and expand on his current and future research agenda.