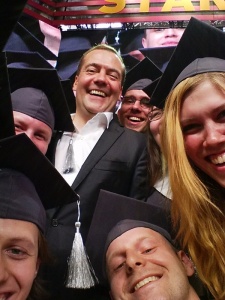 Russian Prime Minister Dmitry Medvedev poses for a ‘selfie’ photo with graduating Skoltech students at a ceremony held at the Startup Village conference. The innovation based university graduates 53 master’s students in IT. Energy, Space and Advanced Manufacturing. Image: Nikita Rodichneko

The first group of Skoltech students celebrated the end of their studies in a ceremony with Russian Prime Minister Dmitry Medvedev at Startup Village.

Accompanied by cheers of “Viva Skoltech” and thunderous applause from the 2,000 the 53 master’s students threw their Graduation Caps – and posed for a selfie with the top politician.

Earlier, Medvedev congratulated the graduating students and awarded the first diplomas to students Dmitry Smirnov and Anna Dubovik. “I remember flying above this area west of Moscow a few years ago”, said the Russian PM, “I was being told that things will be built and happen here. Now the promises have turned into reality.”

The graduates, completed the innovation university’s programs in Information Technology, Energy, Space and Advanced Manufacturing after enrolling in 2012-13, the institute’s first year of operations in collaboration with MIT (the Massachusetts Institute of technology).

“You took a huge risk by joining us”, said the university’s president, Prof Ed Crawley, “at the time we barely had more than a website. Now we are a thriving community of researchers, innovators and entrepreneurs, working with Russian and international universities. And almost half of you have established your own startup companies or projects. I’m proud of you.”

All graduates are scheduled to attend a ceremony in the Russian traditional “last bell” style on June 17 at the Skolkovo Innovation Center.
“We are proud to show off our graduates to the Skolkovo community, to participants and guests of the Startup Village, and to investors,” said the innovation university’s vice president Alexei Sitnikov. 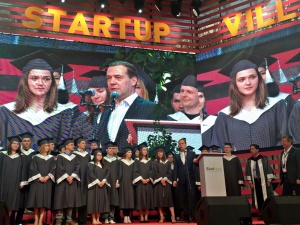 Skoltech is a core ingredient of the Skolkovo ecosystem, supplying the brain power to create innovations that will be commercialized further down the road. More than half of the university’s current intake already have innovations that are either on the market or soon to be available.

“The most important thing for us as producers of talent inside the innovation center, is that many of the guys already have their own companies and startups, and intend to develop them further after graduating from Skoltech,” Sitnikov said.

The official “last bell” graduation ceremony will take place on June 17 at Skoltech. 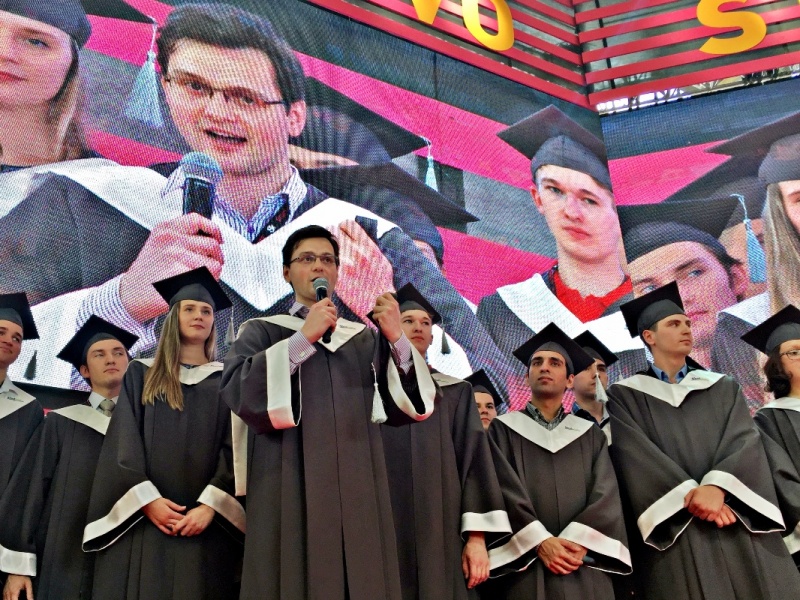 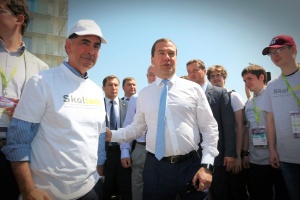 “Dmitry Anatolyevich, haven’t you forgotten something?” the crowd surrounding the Russian Prime Minister, ready to leave the Skoltech students and leadership he had just met, turned their heads. It is not everyday that a graduate student calls upon Dmitry Medvedev to halt to a stop. “We have a gift for you. Would you like to take it?” Medvedev grinned, his security detail relaxed. The photographers shuffled back to the little table where students Aidana Nurzhanova and Nikita Rodichenko were waiting for the Prime Minister of Russia with a goody bag.

Inside it nestled a quadrocpoter, a four-propeller drone, designed and custom built by the Student Engineering Club. Another handshake, one more smile for the cameras and the entourage departed once more.

“That went quite well,” Skoltech’s president Ed Crawley observed, “we are having a good day.” But when Medvedev spoke with the media the rector’s day got even better.

“Skoltech will be a major scientific center, a top university which draws foreign researchers and specialists”, the Prime Minister declared from the main stage at Startup Village, “I thank the international scientists who have come to Russia to help build the Skolkovo Institute of Science and Technology”. His remarks were carried by Russian news agencies and broadcast on prime time TV news, then went viral – shared, retweeted, and posted to social networks.

And yet Skoltech’s day at Startup Village 2014 was not only about VIP guests. Entrepreneurs and professors met at the 4th Innovation Program Conference, organized by the university’s Center for Entrepreneurship and Innovation; students competed with guests at a drones tournament (with a 12 year old pilot called Kyrill becoming an overnight sensation); Skoltech leadership participated in panels and discussions; and a young Russian physicist spoke to the audience through a robot – after learning she had won Science Drive 2014 and will spend the next year working in Manchester with Nobel laureate Andre Geim.

Here are are the pictures that sum up one of the busiest days Skoltech had this year. 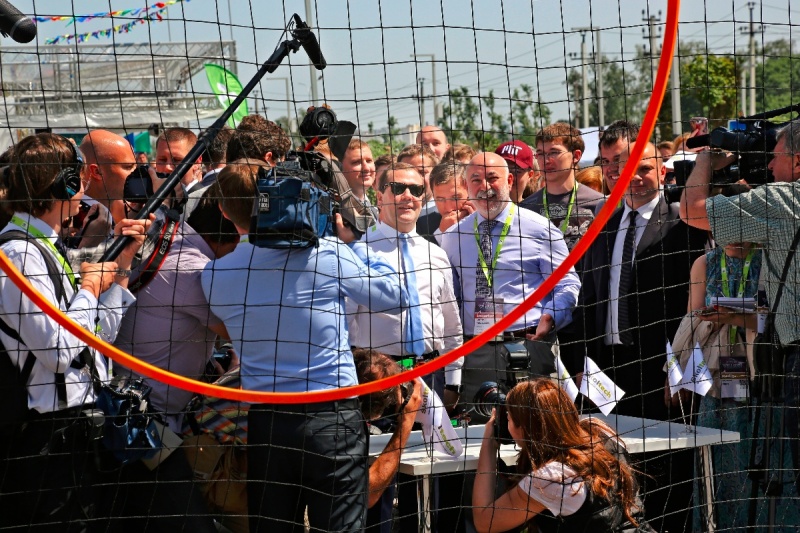 Watching the flyover. Somewhere in this picture hovers a drone 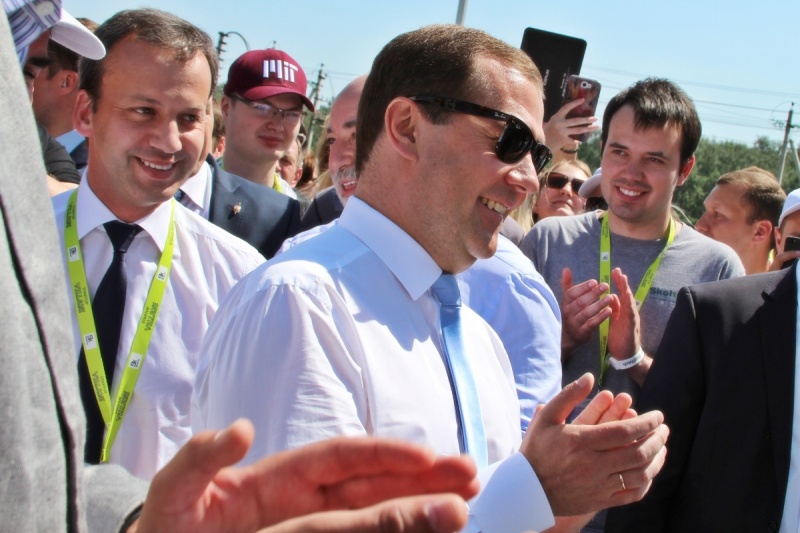 A round of applause to round it up. PM Medvedev and deputy PM Dvorkovich (left) 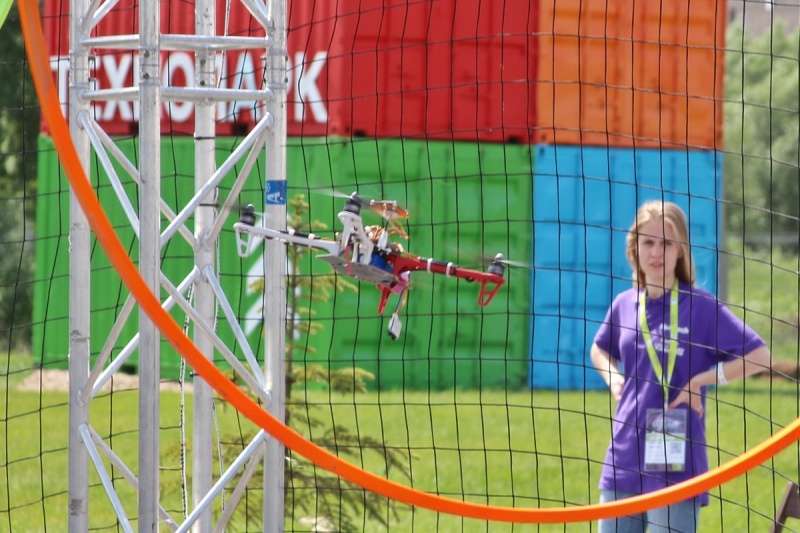 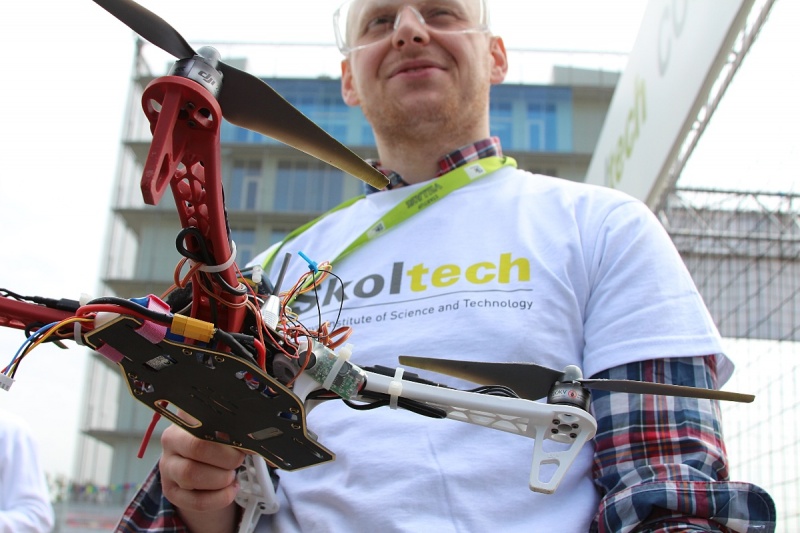 Nikita Rodichenko and his self designed, self built quadrocopter 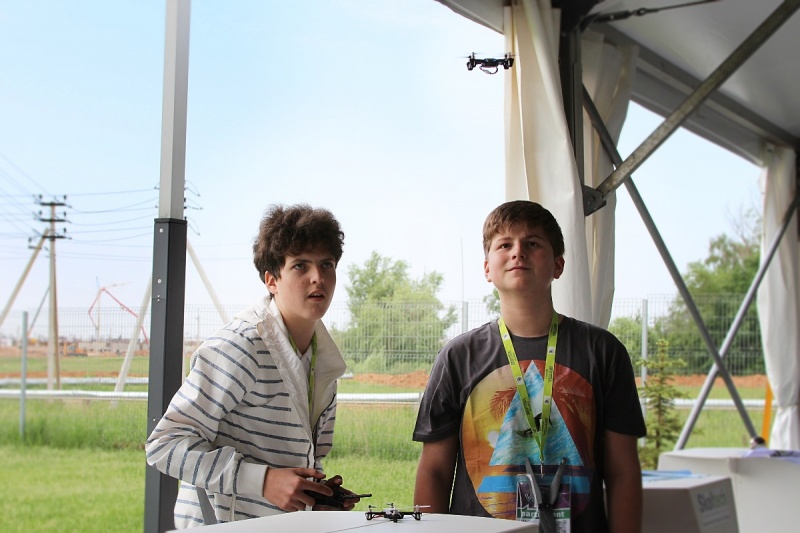 Keeping something so small and so fast up in the air is challenging. The gusty wind didn’t make life easier for these young pilots. But they managed 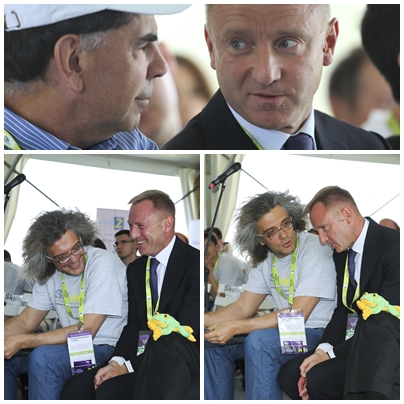 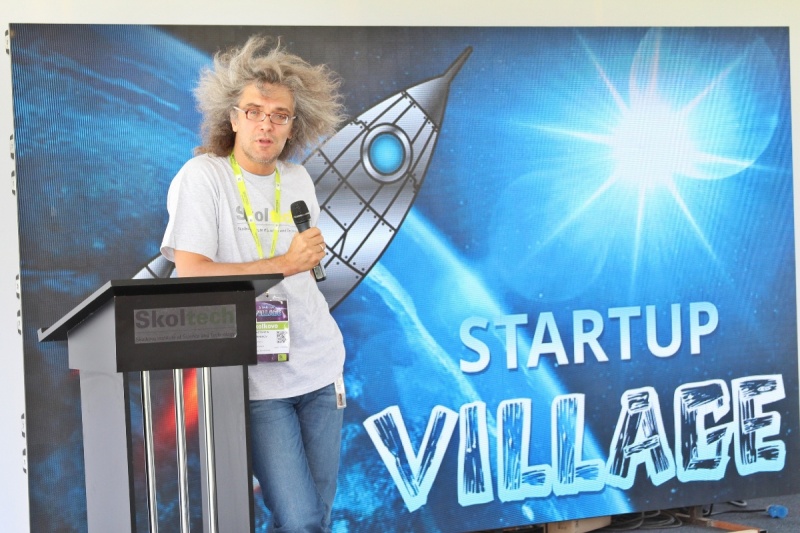 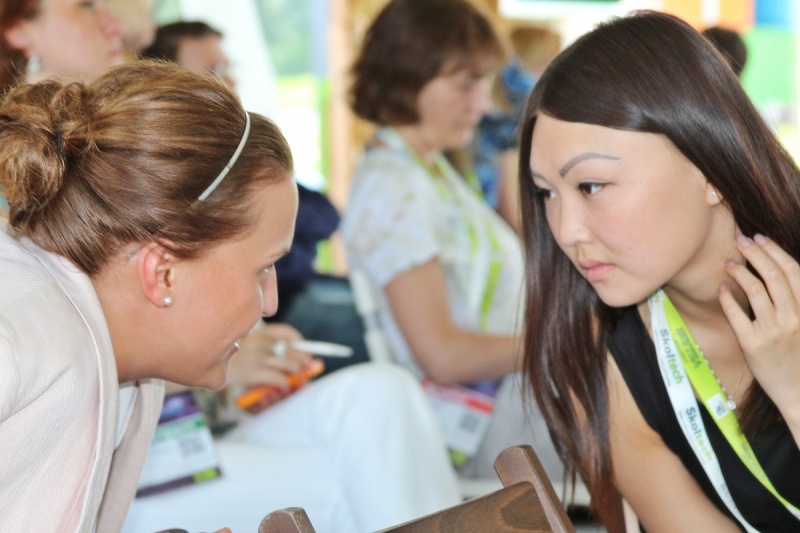 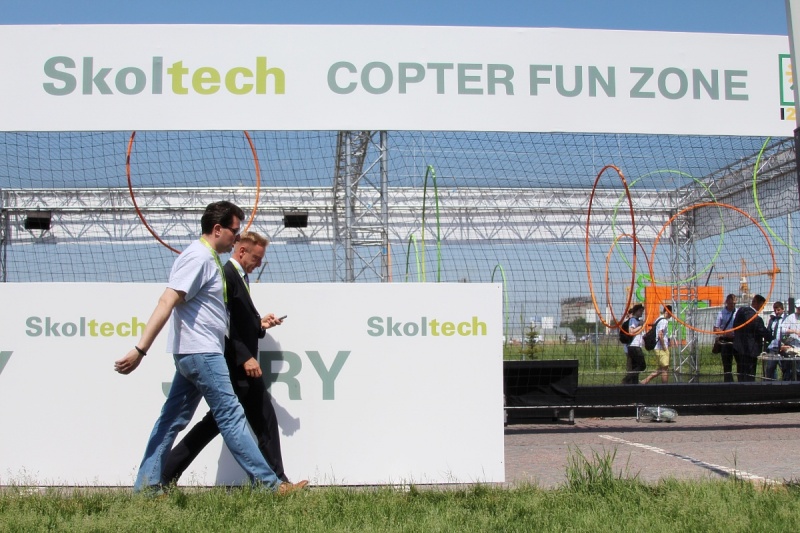 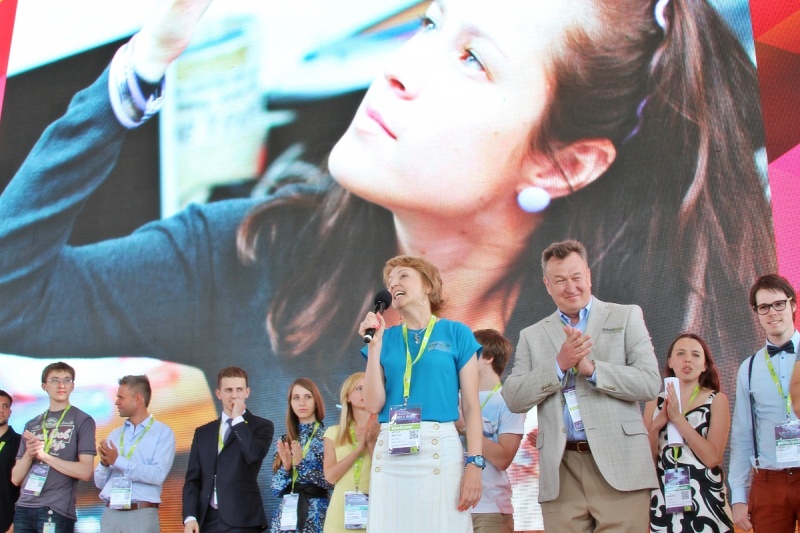 Science Drive winner announced by Dean of Faculty Natalia Berloff. Anastasia Tyurnina (examining tube on the giant screen behind) will work with Nobel laureate Andre Geim in the UK 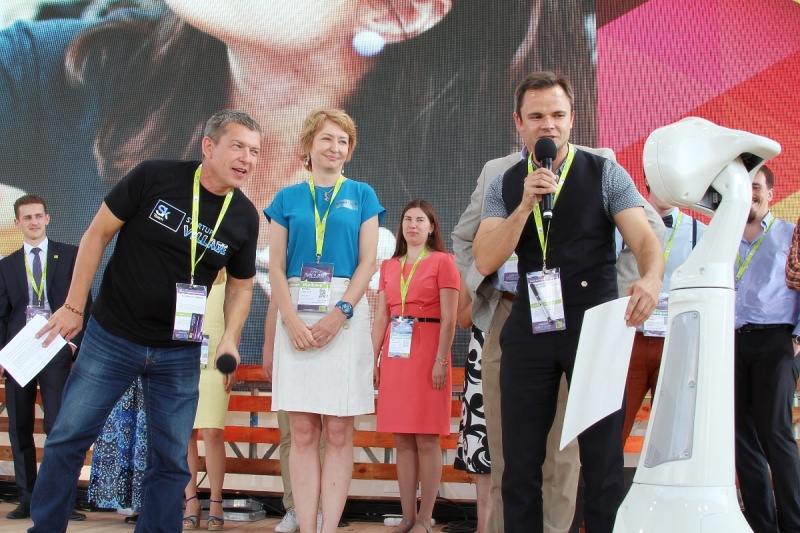 Inside this robot hides Anastasia Tyurnina, winner of Science Drive 2014. It was the organizers’ way to make her part of the celebration, as she spoke over Skype from France. 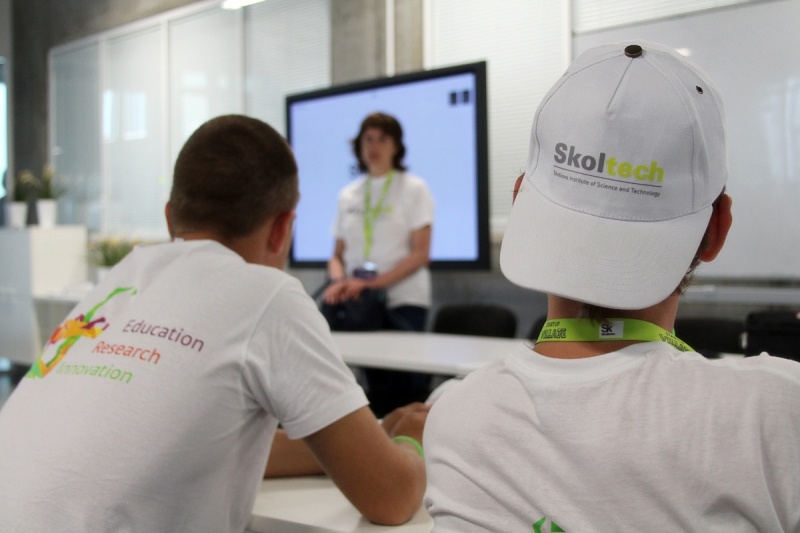