A quantum fluid made of light can be stopped on the steepest slopes or flow into large lakes controlled by a novel mechanism of quantum blockade discovered—can lead to practical ultrasensitive detectors.

Imagine a world where whether the rivers flow down the mountains or stay still on steep slopes depends on seemingly irrelevant factors to our earthly lives like the distance between the mountains or the depth of the rivers. What looks like science fiction is really a property of a novel fluid discovered and analyzed in a collaborative effort between the NanoPhotonics Centre led by Professor Jeremy Baumberg and the Cambridge-Skoltech Quantum Fluids Laboratory led by Professor Natalia Berloff. 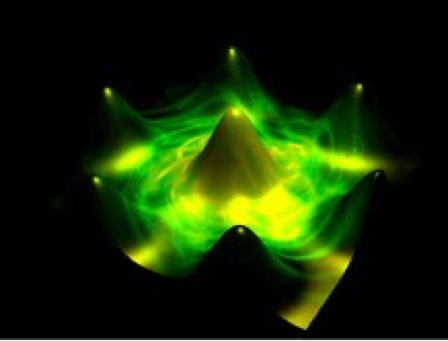 The findings of the Cambridge-Skoltech team published May 3, 2013 in the Physics Review Letters (honored with the Editor’s suggestion) demonstrate the existence of a blockade mechanism in quantum fluids made of light that would allow for high-precision control over these quantum systems. This is crucial for harnessing superfluid circuits, high-precision interferometric devices of a new generation, or macroscopic quantum interference devices for quantum information processing, by entangling different flows.

By injecting composite particles – polaritons — that couple electrons with photons on the top of a high quality semiconductor chip produced by collaborators from Crete, the researchers manufactured a high-precision landscape consisting of 2 – 6 and more circularly arranged mountains made of highly energetic particles. Quantum fluid of low-energy polaritons was formed at the tops of these mountains and was expected to flow downhill. This indeed happened when the injection was rapid or the mountains were closely positioned with a high-density fluid lake formed in the central valley between the mountains. However, there existed a critical injection rate and a critical distance between mountains above which most of the fluid stayed on the slopes with a thin layer of fluid spreading in between the mountains creating a rather sophisticated quantum energy barrier that would not allow for the main bulk of fluid to propagate. Theoretically, the existence of such a blockade has been explained by the role of a so-called quantum pressure that appears when the equations of quantum mechanics are related to the classical hydrodynamical equations of a compressible fluid.

“We can create any mountainous terrain on our semiconductor chip, any landscape we want and observe how the quantum fluid spreads on this terrain in a completely surreal fashion, creating intricate highly stable patterns of quantum liquid. It defeats our intuition, but apparently is in accord with the laws of quantum mechanics,” comments the lead author Peter Cristofolini.

With the ability to turn the quantum blockade on and off the team expects to be able to create and control quantum superpositions of different parts of the quantum polariton fluid resolving the last obstacle on the way leading to an efficient quantum information processing.

The research was funded by the Engineering and Physical Sciences Research Council and the EU.