On 1 March 2014, Skoltech as the partner of the second annual Skolkovo Robotics International Conference organised a round-table discussion entitled “The great unsolved problems of interaction between people and robots”, which was held in the Hyper Cube (building 1, Skolkovo Innovation Center). The meeting was moderated by Maxim Kiselev, the Skoltech Director of Leadership Programmes. The round table was attended by Vladimir Pavlovsky, professor, senior research fellow at the Keldysh Institute of Applied Mathematics RAS (IAM RAS); Nadezhda Zilberman, associate professor of the Informatics Humanitarian Problems Chair, Faculty of Philosophy, Tomsk State University; Arkady Yushchenko, Head of the Robotics and Complex Automation Chair, Bauman Moscow State Technical University, professor, D.Eng.Sc.; Frank Tobe, publisher and editor-in-chief at the information robotics portal “The Robot Report”, co-founder of Robo-Stox, who has managed to turn robotics and automation tools into liquid goods which are now traded on the NASDAQ Stock Market; Prof. Gianmarco Veruggio, Chairman of the Committee on Science, School of Robotics at the Institute of Electronics, Computer and Telecommunication Engineering (Genoa, Italy), who coined the term “roboethics” – the principles of the behaviour of humans when they design and use robots; and Kate Darling, professor at the Massachusetts Institute of Technology, specialist in the field of legal aspects of the anthropomorphism of robots.

In the course of the discussion, questions were raised relating to the philosophical understanding of robotics and the problems of coexistence between people and robots.

Professor Gianmarco Veruggio encouraged the conference to reflect on the ethical aspects of robotics. In many areas of activity, robots are beginning to replace humans, and many professions are becoming redundant. The professor believes that we should already be thinking about the possible social implications of such changes. Particular attention was given to the issue of creating robots capable of causing harm to humans. The scientist explored the problem using the example of military robots. The advanced countries spend enormous resources to develop unmanned combat aerial vehicles, tanks, combat vehicles, “smart” missiles and other types of combat robots. At the same time, today’s international law has no more or less established regulations governing the application of combat robots. There is no clear-cut definition of the term “robot” either. The situation is further complicated by the fact that military technological developments are being carried out in the utmost secrecy. At the moment, it is hard to say how high is the risk that, in the near future, we may witness the advent of independently-thinking soldier robots, with a free will, who will turn all of their military might against humans. However, it is obvious that the uncontrolled development of combat robots (same as any military technology) can lead to the most terrible consequences. Therefore, the problems raised by roboethics are more urgent than ever. 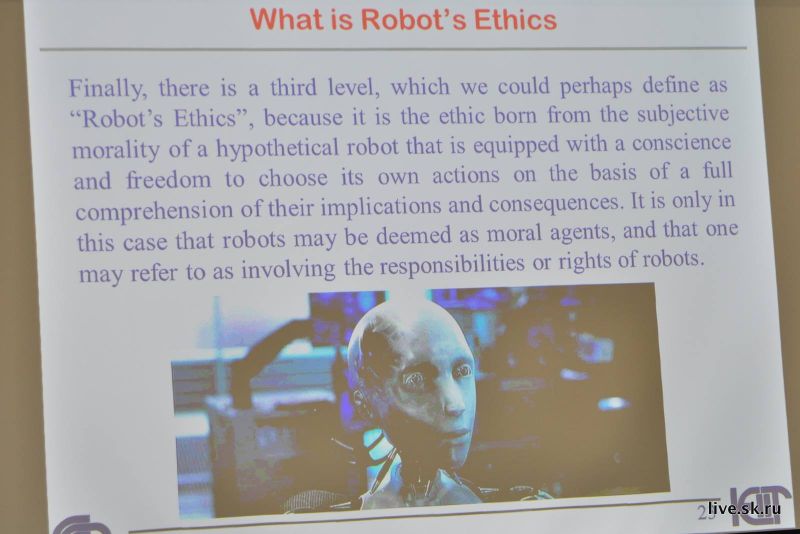 Kate Darling, a researcher at the Media Lab of the Massachusetts Institute of Technology, continued developing the theme of roboethics by exploring the problems of interaction between humans and robots in daily life. When interacting with robots at home, people are inclined to attribute human qualities to them, thus getting emotionally attached to them. This can lead to the most unexpected consequences. For example, a child forms an emotional bond with an anthropomorphic toy robot, and then, if it breaks, he or she gets psychologically traumatised, like it happens when their pet dies. But along with the emerging risks, the beneficial aspect of these toys is obvious as well. They contribute to the intellectual and emotional development of children. According to Kate Darling, in order to minimise the damage inflicted by social and household robots and to maximise their benefits, developers and manufacturers of robots need to be aware of the degree of their responsibility. The sphere of social and household robotics requires legal regulation no less than the sphere of military robots, believes the scientist.

Vladimir Pavlovsky, professor, a senior research fellow at the Keldysh Institute of Applied Mathematics RAS (IAM RAS), drew the attention of the attendees to the problem of the understanding of human utterances by robots.

“To date, we have not determined what is meaning,” said professor Pavlovsky. “But we still want a robot to understand that meaning.”

The professor believes that the interaction between humans and robots on equal terms is still an issue of the future. The problems pertaining to the deciphering by robots of simple verbal instructions that even children understand still remain unresolved.

During the meeting, the question was also discussed where the borderline is between an automatically operated mechanism and a robot. Participants in the discussion concluded that a robot is a technical system endowed, to some extent, with the “freedom of will” and the ability to make decisions independently of the will of its creator, and thus, potentially, against his or her will. This imposes a particular responsibility on developers of robotics systems.

“The problems that were discussed today are, first of all, the problems of responsibility,” underlined Maxim Kiselev. “I would like to reiterate what I often say to my students: when creating new technology, please, think of the consequences that it can lead to and of the responsibility that you bear as inventors.”

In conclusion, Maxim thanked the organisers of the conference Skolkovo Robotics and, in particular, Skoltech as the organiser of the round-table discussion.

“In my eyes, the themes raised here are among the most important ones at the conference,” said Albert Yefimov, Skolkovo Foundation’s Project Director for IT Cluster, who was also present at the meeting.“In my opinion, the search for answers to the questions that were raised today is a worthy task for young researchers and, in particular, for the Skoltech students who are present here today.” 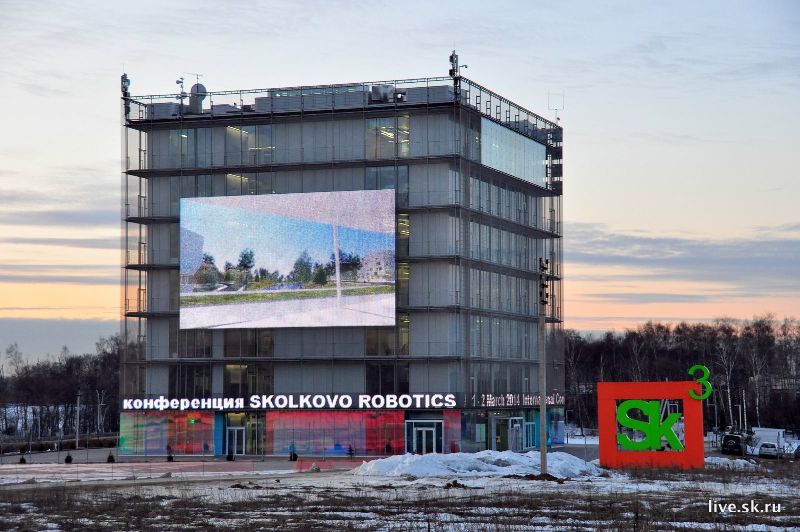 The Second International Skolkovo Robotics Conferenceis the largest Russian forum in this field,which was held on 1–2 March at the Skolkovo Innovation Center.

The purpose of the conference is to bring together for dialogue, on one site, the maximum number of people interested in the development of robotics: customers and potential investors, entrepreneurs, scientists, engineers and students.

Skolkovo Robotics-2014 was organised by the Skolkovo Foundation in collaboration with the Russian Ministry of Communications and Mass Media. The list of the Skolkovo Robotics partners included the Advanced Research Foundation, the Volnoe Delo Charitable Foundation, RVC JSC, Grishin Robotics, Intel, Autodesk, Skolkovo resident company Vision Labs, as well as the Skolkovo Institute of Science and Technology (Skoltech) and Skolkovo Open University.