Each time the cost of crude oil hits a new record, Dr. Andrey Khalimon feels there must be a better way to process fuels and produce energy. When energy demands soar – he thinks of a possible solution. On June 5 he will present a seminar on the importance of catalysis for the future development of the chemical industry and alternative petrochemical technologies. Come and hear how the activation of small molecules can solve the big problems. 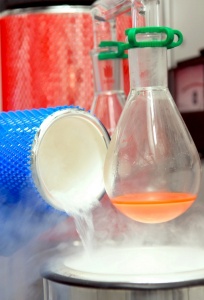 Catalysis represents a key technology for the future development of the chemical industry. Catalysts enable products to be formed selectively and more efficiently by opening lower energy pathways. The majority of industrial catalytic processes are heterogeneous and often require harsh conditions and show poor selectivity.

This seminar will discuss the potential and challenges of organometallic chemistry in the further development and better understanding of important catalytic transformations related to the activation of small molecules and research in alternative petrochemical technologies, alternative carbon sources and renewable energies, which are highly emerging problems associated with the growth in the energy demands and increasing cost of fossil fuels.

The ability of homogeneous catalysis to offer potential solutions to these problems will be illustrated with examples of (1) activation of small molecules and catalysis by molybdenum silylamido agostic complexes, (2) the design of efficient photo Lewis acid generator and application of this concept to materials chemistry and photo-induced Lewis acid catalysis, and (3) utilization of carbon dioxide in the direct catalytic synthesis of acrylates.

Dr. Andrey Khalimon obtained his Diploma in Chemistry with Excellence degree in organometallic chemistry from the M. V. Lomonosov Moscow State University (MSU, Russia) in 2004. The same year, he joined the PhD program at MSU and was a visiting scholar at the chemistry departments of the University of Oxford (UK) and Royal Institute of Technology (Sweden) in 2005.

In 2006, following his supervisor, Dr. Georgii Nikonov, Andrey moved to Canada where he continued his studies in inorganic chemistry and catalysis at Brock University and completed his PhD degree in 2010.

Currently, Dr. Khalimon is a postdoctoral researcher at the Catalysis Research Laboratory (CaRLa, Germany) jointly managed by BASF and University of Heidelberg (Germany). His previous postdoctoral studies were done in the group of Dr. Warren Piers at the University of Calgary (Canada).