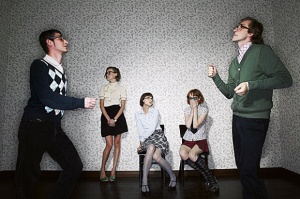 Even smart tech grads might feel like dancing after a year of intense studies. Image courtesy of http://vegashipster.blogspot.ru/2012_07_01_archive.html

Common sense might expect that events organized by the students’ office would either mean that everyone present must delve into deep subject matter or dance the Macarena. There’s no middle road. Right? Wrong. Here’s one get together that could provide two experiences almost at the same time – the deep reflection and the frivolous celebration.

First, presenting our guest Speaker. Loren Graham is a Professor Emeritus of the History of Science in the Program in Science, Technology and Society at MIT. On June 5 at Digital October Skoltech’s public lecture will feature prof. Graham and his recent book, Lonely Ideas: Can Russia Compete?
In Lonely Ideas, Loren Graham investigates Russia’s long history of technological invention followed by failure to commercialize and implement.

For three centuries, Graham shows, Russia has been adept at developing technical ideas but abysmal at benefiting from them. But he points to new connections between Western companies and Russian researchers, new research institutions, a national focus on nanotechnology, and the establishment of Skoltech and Skolkovo, a new technology city. Today, he argues, Russia has the best chance in its history to break its pattern of technological failure.

So this is the thoughtful part of the evening. And now to something less official:

Skoltech students will be glad to share with anyone attending the event at Digital October their experiences during the school’s first academic year. Expect grads to chat about the cross disciplinary studies and training at Skoltech, their early stage start-up projects or hopes for employment. Then again, since there will be free snacks, free drinks and free spirits, spontaneous dancing might erupt.