Two dozen researchers and tech executives sat around the white Formica table, decorated with a handful of water bottles and a few ballpoint pens. Some women wore power suits, the men had ties on. The Russian-born expats have come to Cambridge to consider their cooperation options with Skoltech. The Moscow-based tech university, whose core mission includes deepening its ties with the Russian scientific diaspora, have sent two members of its leadership team to the English university town in order to convey a clear message to their target audience. There is one key to reversing Russia’s brain drain: you.

“People. We need people. Human capital is extremely important for a new university,” stressed Mikhail Myagkov, Vice-President for Academic Affairs and International Relations at the Skolkovo Institute of Science and Technology (Skoltech), “The growth of our academic and intellectual potential must be parallel to the construction of the campus. Experience gained by young and successful innovation-oriented universities shows that the contribution of scientific is crucial. That is why we are here.”

Natalia Berloff, Skoltech’s Dean of Faculty, pointed out the university’s role as a multidisciplinary institute, a portal between industry and science, diaspora and homeland. “Bear in mind, we serve as a gateway for western companies who want to operate in Russia”.

But most of their time in Cambridge, where Berloff is Professor of Applied Mathematics, was invested in listening. Participants asked about Skoltech’s partnership with MIT, ties to the business community, students’ recruitment, visiting positions, postdoctoral programs, research funds and the structure of the university’s 15 Centers for Research, Education and Innovation (CREIs).

Dr. Oleg Kovalevskiy, a molecular biologist with the Gurdon Institute, University of Cambridge, said he was considering moving back to Russia after six years in the UK. “I am exploring all the different opportunities available. I have heard many different opinions about Skoltech, both positive and critical, and this round table discussion is a perfect chance to talk about all those matters.”

Russia’s pool of scientific talent is massive but not limitless. Despite being famed for its education system, the country has struggled to keep brilliant researchers at home ever since the collapse of the USSR. Reversing the brain-drain has become a top priority for Russia’s government – and Skoltech was designed with this goal in mind. 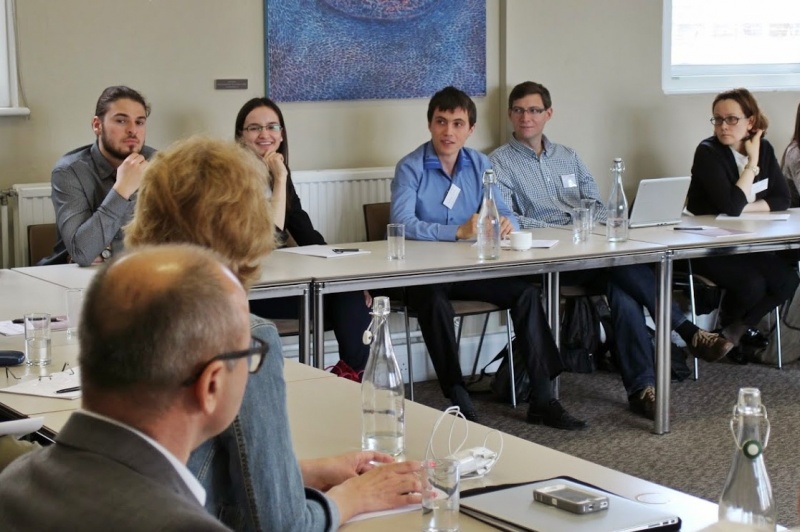 Reversing the Russian brain drain is one of Skoltech’s core missions. Photo from a meeting between the institute’s team and Russian-born scientists and entrepreneurs living in the UK