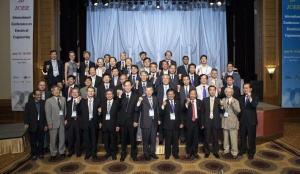 Bridge-building to research and industry communities worldwide is one of Skoltech’s core missions. And one of the most crucial – and pressing – applications of international cooperation is in the field of energy. What way forward should countries take in order to better utilize and share precious resources?  Ksenia Kushkina, a project manager with the Skoltech Center for Energy Systems suggests that a proposed ‘North-East Asia Supergrid’, also known as the ‘Asian Energy Ring‘, could offer a good option. In a recent visit to Korea and Mongolia, Kooshkina presented her findings on the region’s energy needs – and how to efficiently address them by sharing and combining energy systems across borders.

The designers of the ‘super-grid’ propose to combine the power outputs of Siberia, the Russian Far East and Asia-Pacific countries such as China, Japan and South Korea. Kushkina participated in a panel session on the topic at the International Conference on Electrical Engineering in Jeju, South Korea last month (see image). The discussion involved, among others, representatives of research institutes, electrical equipment suppliers, energy companies and manufacturing corporations such as KEPCO (Korea), NARI Group (China) and EN+ Group (Russia).

Kushkina: “In Korea, we have presented the preliminary results of research on the effectiveness of interconnecting Russia, China, North Korea, South Korea and Japan. Our study shows that each country’s power systems will benefit.  Our conclusions were further supported by the interest in the project from Korean, Chinese and Japanese companies”.

Skoltech research on modeling new electrical connections (such as the ‘Supergrid’ or ‘Asian Energy Ring’) was ​​performed in the framework of the memorandum signed between Skoltech, En + Group and South Korea’s KEPCO during Russian President Vladimir Putin’s visit to Korea in November 2013. Now the team is hard at work, preparing further cooperation proposals ahead of a visit in Russia by the President of the Republic of Korea in 2014.  Skoltech researchers are slated to present the results of the study at the “Asia-Pacific Economic Cooperation” (APEC) summit in November 2014.