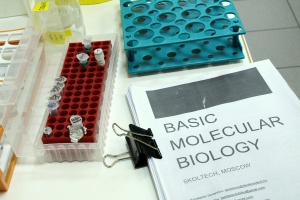 “There might be no word in English to describe what we are doing here”, Skoltech Professor Konstantin Severinov manages to furrow his forehead and chuckle at the same time. A student rushes by through the beige painted corridor at the Institute of Gene Biology, carrying a test-tube rack. A fluorescent purple liquid swirls inside the flask she is holding. The biomed professor glances at the Erlenmeyer and continues: “Skoltech has officially established its first Basic Cafedra. It has an important role in Russian science and academy, because it allows students to combine top notch education with hands-on experience in a real lab. But still, how is this basic cafedra model called in English?” he challenges two colleagues.

“A university department”, one of them attempts cross cultural translation.

“A chair,” another suggests.

“Maybe,” the professor says, “let it be both. What’s important is that our biomedicine students would feel comfortable and confident entering any molecular biology lab in the world.” 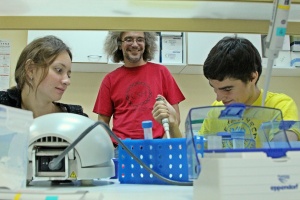 Professor Konstantin Severinov with biomedicine technology students at the Institute of Gene Biology, Moscow. Skoltech and the IGB finalized an agreement to create a “basic cafedra” – a unit combining fundamental studies and hands-on experiences and similar to a department in western research institutes.

One of Skoltech’s key targets is to build a community of scientists in collaboration with research centers worldwide. Thus, this specific molecular biology course is modeled after the one designed by Cold Spring Harbor lab in the US. Anna Pavlova, a biomedicine technology PhD student, is a medical doctor and an experienced physician. And still, she says, the establishment of a new biomedicine department and lab experience are a “great opportunity to get a sense of whether you are ready and willing to spend every day over the next three years in a lab.”

Pavlova pours droplets of solution into a Microtiter plate. “We are practicing things such as PCR, point mutations, restriction, knockouts, and designing primers, which are strands of nucleic acid that serve as a starting point for DNA synthesis. These skills allow us to feel much more comfortable in a foreign lab and develop a deeper understanding of theoretical courses.” She puts the pipette aside.

“Wednesday has become so exhausting since we have begun working here. But it’s my favorite day of the week. It slowly dawns on me that a mixture of something with something could knockout genes or give E.coli bacteria absolutely new features.”

“Like antibiotic resistance or the ability to produce fluorescent proteins. Interesting, right?” 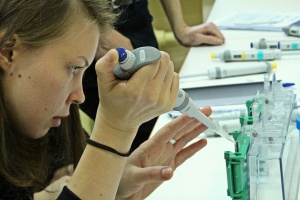 The hands-on modular molecular biology Courses at Skoltech are modeled after the Cold Spring Harbor laboratory courses in the US.

Brendan Wilcox, a Canadian PhD student who joined Skoltech this year, oversees the proceedings at the laboratory. A graduate of Penn State university, he is experienced in lab techniques and was appointed teaching assistant (TA) for this course.

“My role in this particular class is to help oversee the students as they go through the laboratory procedures, and answer any technical questions they may have. I also do my best to instill some English speaking lab lingo”, he smiles.

“But mind you, the course is as good as any class taught in an American university. Except there is more Russian being spoken here.”

While planners and builders rush to complete the construction of the Skoltech campus, interim solutions must be devised. The eight students work and study at a lab located at the Institute of Gene Biology in Moscow, a division of the Russian Academy of Science, which signed an agreement with Skoltech.

“Our PhD students get to do proper lab rotations and research projects here,” explains Severinov, a Russian expat who returned from the US to live in the Russian capital and heads five labs worldwide.  “We followed a hugely successful strategy developed by the Moscow Institute of Physics and Technology (also known as Phystech) in the 1950’s. They are the ones who originally created the ‘basic cafedra’ (‘базовая кафедра’ in Russian). We stand on the shoulders of some very serious people.” 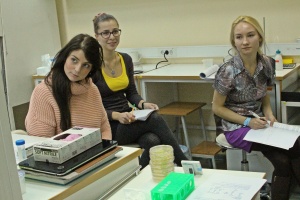 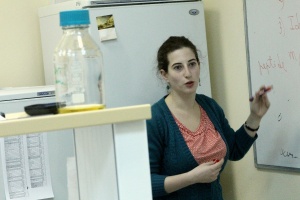 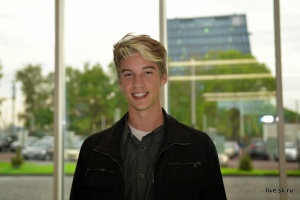 Brendan Wilcox, a Penn State graduate is a PhD student and teaching assistant (TA) at Skoltech: “The course is as good as any class taught in an American university.”