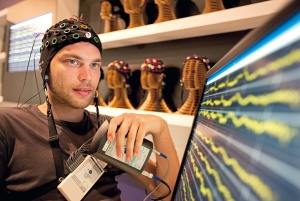 We are pleased to invite you to the Skoltech Colloquium. And this time Skoltech Professor Philipp Khaitovich takes you on a journey down the rabbit hole of the human brain’s evolution.

What: Molecular features of human evolution

Where: Hypercube, 4th floorHuman evolution has resulted in a species that possesses an apparently unique set of phenotypic capabilities. In our laboratory, we search for molecular features specific to humans, through integrative analysis of genetic, transcriptomic and metabolomic data measured in modern and archaic humans, as well as closely related mammalian species: chimpanzees, macaques and mice. Here, I will share recent insights into uniquely human features of brain development and brain organization, as well as a hidden link between brain and muscle evolution.

Speaker: Professor Philipp Khaitovich, born in Moscow, Russia in 1973. Completed undergraduate studies at Moscow State University in 1995 and PhD at the University of Illinois at Chicago in 1999. From 2000 till 2006, worked as a postdoctoral researcher at the Max Planck Institute for Evolutionary Anthropology at the department of Evolutionary Genetics headed by Prof. Svante Pääbo. In September 2006, he took a faculty position at the Institute for Computational Biology jointly established by the Chinese Academy of Sciences and the Max Planck Society in Shanghai, China and in 2012 became an institute director. In 2014, Philipp joined Skoltech as a professor ate the Bio Medicine initiative.

We look forward to seeing you.