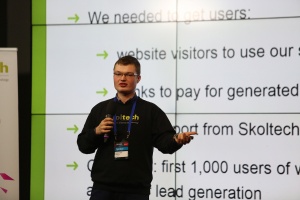 Alexander Ivanov, Skoltech student and Easy Wallet’s co-founder: “I’ve never been so ready for a presentation in my life”.

“I think I’ve never been so ready for a presentation in my life”, Alexander Ivanov said after he completed a four minutes session facing a panel of judges at the Global Student Entrepreneurship Award. “I went through so many sleepless nights. I endlessly rehearsed. Turns out that was the right thing to do”. Financial management service Easy Wallet, which Ivanov co-founded with fellow Skoltech student Rustem Feyzkhanov, was awarded Best Internet Project for 2014.

Recommendations and offers are based on each individual user’s income, lifestyle, and consumption patterns, thus making Easy Wallet part of the much-talked-about trend of customization. The young company’s leadership duo says the service has no need for and never uses personal data, PIN codes or card numbers.

Ivanov: “It is pretty incredible to think of the progress we made. We started to work in September 2013, received support from Skoltech mentors who helped us establish connections with banks. We also leveraged the university’s educational resources. Then we received funding from HSE’s Innovation Project program and spent four months with the QIWI Universe accelerator. Thousands of people downloaded the app and we have established a profitable online card calculator. We’re constantly growing.”

And then came the GSEA award.

Ivanov describes it in David vs Goliath terms. “You know, we competed with mature projects which have hundreds of thousands of users and millions of dollars in revenue. Then we had four minutes for our presentation and four minutes for Q&A. And we won.”

It was not the only achievement that startups launched by Skoltech students scored toward the end of 2014. ImageAiry, a satellite imagery marketplace, was selected as one of the year’s top 50 Russian startups. The university’s Center for Entrepreneurship and Innovation (CEI) estimates that 6 out of 10 Skoltech graduate students are actively involved in similar projects.

Some student owned enterprises, like Easy Wallet, are beginning to reap the rewards of their hard work. Since they were nominated for the award by Google, Ivanov and Feyzkhanov will travel to Seoul, South Korea in April 2015. They are scheduled to visit the local Googleplex, where they hope to gain invaluable networking opportunities.

Easy Wallet can be downloaded as a free app for Android and is currently available for clients of more than 60 Russian banks. Additionally, its website offers a free service which locates the most beneficial bank cards and deposits programs available online.