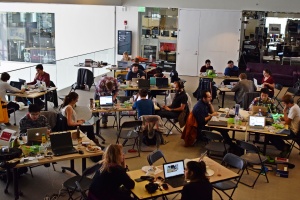 Graduate students at Skoltech, Moscow’s science and innovation-focused university, shuffled into a lecture hall outside the Russian capital earlier this month. They gathered to hear MIT’s Professor Luca Daniel walk them through the intricacies of computational methods. But the Italian born lecturer and tutor was not present in the room. Not in the physical sense, at least. His face and voice were beamed via video conferencing from an auditorium in Boston, Massachusetts.

Daniel, who visits Skoltech every few weeks to teach and meet fellow researchers, grinned at the students from the screen. “OK! We have a lot of ground to cover”, he laid down his morning latte on a desk and began writing on the blackboard, “let’s take a look at this ordinary differential equation. Who remembers what we said last week?” the professor asked from eight time zones away. A few arms were raised. In the dusky afternoon, class commenced. 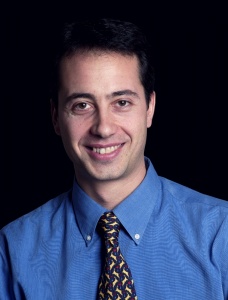 The Massachusetts Institute of Technology (MIT) and Skoltech, which was launched after an agreement between MIT and the Skolkovo Foundation was signed in 2011, will co host a conference at Moscow’s Digital October center on December 15. Organizers of the event, titled “The Russian American Research Symposium”, aim to bring together leading scientists from both institutes to “exchange novel ideas in translational research, innovation, and entrepreneurship” and “share valuable insights” on trends in Biomedicine, Energy, Computer Science, Advanced Materials, and Aerospace.

Officially, MIT’s continuing role is to support Skoltech with the design of the educational curriculum, research programs and innovation activities. On the ground, daily collaborative activity incrementally translates the statements into reality. Bridges are being built, as students and researchers make the trip across the Atlantic.

As part of the collaboration, Daniel is involved in supporting faculty recruitment efforts for the Moscow-based university. In his teaching role, the electrical engineering professor encourages his MIT students to work closely with their Russian peers in their class projects. “You have to focus on the bigger goal,” he explains, “and that is how all of us together can achieve better results.”

Students from both sides echo this view. Andrii Omelianovych, a 25-year-old Energy Technology student at Skoltech, is currently spending a semester studying and working at MIT. As a visiting researcher, Omelianovych says he “learned plenty” by working on thin-film photovoltaic cells alongside researchers from the Grossman Group (Department of Materials Science & Engineering) at the Cambridge-based institute. At the same time he keeps his professional ties to the Skoltech Center for Electrochemical Energy Storage (CREI), which, in turn, also collaborates with MIT. 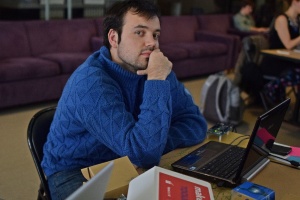 “The participation of visiting Skoltech students in an MIT group provides outside perspective as well as potentially brings additional expertise. Personally, I contribute the skills and experience I have with thin film processing and characterization, learn about concepts that are new to me, such as 2D material design, surface functionalization, and all carbon solar cells. And I gain a lot of hands on experience in experimental research. MIT has a lot of great tools for that.” He pauses for a breath and a contemplation.

“But most important, there is a positive attitude toward collaboration and mentoring. You sit in weekly group meetings and hear a detailed review of lab activities at MIT.

George Chao, a biomedical science student from MIT is now gearing up for a journey in the opposite direction: from Boston to Moscow, where he will spend a “few weeks” with Skoltech in January 2015. Chao will be part of a group of computer science, biology, mechanical engineering and business students.

“Russia is clearly a major world scientific power”, he says. “But to be honest, research in my field is done very similarly around the world. In this sense, my goal in coming to Russia is not to learn some secret knowledge, but rather to meet people, make friends, and learn about the research culture.”

George Chao, Biomedicine student at MIT, plans to travel to Russia and work with Skoltech in 2015: “watching the initial growth of a university is an incredibly rare and educational event.”

Skoltech prides itself in having 20% international students, hailing from 20 countries around the world. How do you see yourself fit in?

“I heard that Skoltech is a blossoming institution full of growth. I think watching the initial growth of something such as a university or a company, is an incredibly rare and educational event, so I am fortunate to have this opportunity.”

As for the road forward, administrators and faculty on both sides envision a strategic partnership dedicated to enhancing capacity at Skoltech so it can edge closer to achieving its primary goal: combine education and research to create impact on society and the economy in Russia and the world.

But how do you turn a pool of talent and into an efficient machine of value creation?

Perhaps by creating in Moscow a customized version of the MIT entrepreneurial model. The American institute is renowned for its unparalleled prowess in translating scientific knowledge into real world results. Efficient patenting, technology transfer and commercialization practices constitute the cornerstones of its robust innovation structure.

Ed Crawley, Skoltech’s president and an MIT engineering professor, highlights this approach. In a recent interview with betaboston.com he stressed how nearly half of Skoltech students are actively involved in a startup project. “That’s a phenomenal indicator if it holds up,” he said “Skoltech has a lot of the DNA of MIT in it”.

It is this unique code, agrees MIT Professor Amy Glasmeier whp teaches a ‘Global Energy, Decisions, Markets and Policy’ course at Skoltech that could make all the difference. 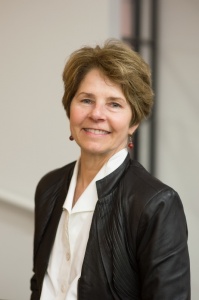 Glasmeier: “I begin each class by stating my own biases, my outlook, my approach. The point I try to make to students is that we need to actively challenge our views. That way students become less concerned about competition for the sake of competition and more about how the system as a whole operates and how individuals and places create their own specific advantages.

Education at MIT emphasizes critical thinking skills. Students are taught to deconstruct issues, examine the constituent parts and then figure out how they work together”, she claims.

And what should Skoltech students carry with them from this experience and into the future?

“I would like to hope that being taught by MIT faculty exposes students to intellectual openness. I purposefully convey that for me there is no single cause of today’s circumstances.  Instead I offer an opportunity to look at issues critically and to see them in tension. The world is a complex place.”