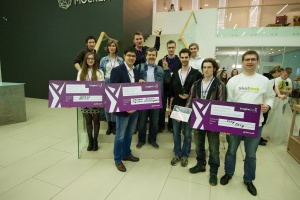 “I am so happy and so totally exhausted”.

Skoltech student Dmitry Suvorov could not find many words a few minutes after learning his smart robot Lexy was awarded first prize at Imagine Cup, a global student technology competition organized and hosted by Microsoft.

“The preparation for the big final was so intense. But still, it just feels great to hear the presenter saying on stage that your project is the most innovative in the country. So I would say I’m more happy than tired.”

Suvorov and Stas Ashmanov, both PhD students at Skoltech, are co-founders of Wicron, a robotics smart startup.

A few months ago they submitted Lexy, a smart, friendly and talkative home assistant , to the Innovation category of the world’s premier student technology competition. Lexy uses speech recognition to help people with anything from domestic chores, through relaying sports news to providing information on traffic conditions. Crucially, it simulates and produces various human moods and emotions and can even demonstrate artificial intelligence, such as an ability to learn new themes and objects. In terms of hardware, it is equipped with a camera, microphone, backlight, sensors and speakers. But at Lexy’s innovative heart lies its software, which relies on learning algorithms. These are meant to help the robot to respond to what it sees and hears, and process information so it becomes increasingly smarter and more attuned to its human master – or friend. 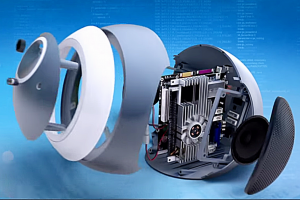 Smart assistant robot Lexy. can learn from its interactions with people. Image courtesy of RT

Along with their partners at Wicron, the student-entrepreneurs have been busy developing an array of smart robotics solutions. One such project is Webot, a telepresence robot which moves around autonomously, with a speed of half a meter per second, similar to that of a person.

Fitted with a camera and a display, Webot was recently utilized as a proxy for house-ridden and disabled children who cannot attend school: the robot ‘represents’ the child in class. The distant learning project received pledges of 224 thousand rubles (a sum roughly equivalent to 4,200 USD) as part of a crowdfunding campaign on Russian website boomstarter.ru.

While the team members are preparing for the Imagine Cup semi-finals, Suvorov already contemplates the next phase of Wicron’s growth. He believes the recognition Lexy gained as “the most innovative project in Russia” can propel the company towards strategic expansion. “We want to enter the global market”, he says. “We are actively seeking potential customers, partners and investors. If we make it to the competition’s world final in Seattle at the end of June, we will have an amazing opportunity to present our project to top-managers at Microsoft and beyond. We also really need to improve our English skills before we can even dream of achieving all this.”

English is the working language at Skoltech. Do you feel that any other learning and innovation experiences have an effect on your career path?

Students are encouraged to develop startups during their studies here. So I focus my research at the university on the same problems which I want to solve with Lexy. We’ve also been mentored by prof Dzmitry Tsetserukou, who is a world authority on humanoid robots and tele-existence. This combination between lab and real life is just invaluable. Wicron also became a resident startup with Skolkovo Robotics Cluster. Combine all these together and you see that we get some serious support here.”