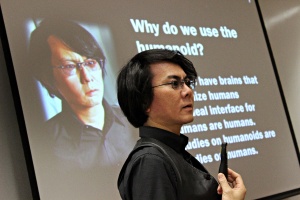 “At first, my humanoid robots were rather limited”, Prof Hiroshi Ishiguro reminisces.

“Psychologists thought the androids behaved like brain damaged people,” he lets out a rare chuckle, “that is no longer the case”.

Renowned worldwide for creating a robotic clone of himself, the 49 year old Osaka University researcher gave a series of presentations at a Skoltech conference. While discussing the current state of robotics research in Russia with his host, Prof Dzmitry Tsetserukou, Ishiguro also used his time on stage to showcase his own work – and to chart a road-map to a futuristic “Robots Society”. Ishiguro runs Japan’s biggest robot research program at Osaka University, where he is entrusted with a $4 million annual budget from the government.

As sci-fi as it may sound – evoking images of nifty and always-helpful androids who never need a bathroom break – Ishiguro believes that humanity is headed toward realizing his vision within a few years. Affordable and tireless human-like robots will be present practically everywhere (if they are not already are), he says.

Some of the Japanese pioneer’s creations are already operating in various contexts, from senior citizens homes, through nurseries, hospitals, malls, theaters and all the way to prime time song competitions like The Voice. “They will never ever sing off-key”, Ishiguro assured an audience of a hundred bemused students and members of the public.

Robots with human features, he claims, can soothe babies, reduce teenagers’ stress, teach foreign languages and ease loneliness. But all this, he stresses in the same breath, is not as significant as dealing with the way innovation revolutionizes human-machine interaction.

“Why do I develop humanoid robots? Because they provide us with a much deeper knowledge of ourselves. It’s interesting and fun and sometimes important to create shop windows mannequins that react to people with proper gestures and know how to tweet.”

“But the real challenge is to better understand what it means to be human. The effort to understand the similarities and differences between humans and humanoid robots will allow us to develop a new hypothesis about ourselves.” 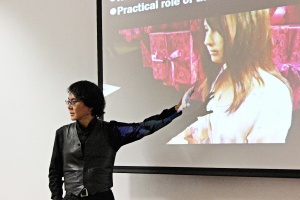 Hiroshi Ishiguro at Skoltech:“Thanks to androids we develop new advanced technologies. But they are also crucial in helping us reach new insights into the human condition.
A robot makes us wonder: what is identity?”

What are the most complex tech challenges that humanoid robotics’ experts need to solve?

“In my lab’s case, at the beginning there was a lot of work on sensors and movement. Then there is the aspect of looks and appearances. What kind of robots attract us, scare us, make us tense or put us at ease? Next there is the issue of creating subconscious and reactive movements. When you sit you constantly move. But we don’t know why and how the brain creates these movements. In order to develop smarter robots we must delve deeper into cognitive and neuroscience. Only then we can deal with creating mental states, giving robots the capabilities to behave and react emotionally like people. It is not impossible.”

So what do you foresee – or even wish – for people worldwide?

“Thanks to androids we develop new advanced technologies. But they are also crucial in helping us reach new insights into the human condition. A robot makes us wonder: what is identity? We will philosophize. We will ponder and contemplate. That is what makes human beings unique. And it is not about to change.” 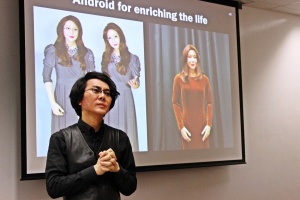 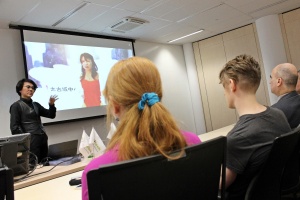 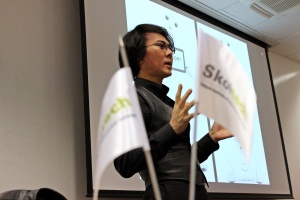