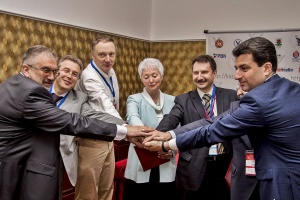 A Skoltech initiative to accelerate the adoption of advanced technologies throughout Russia received official support from leading research universities, which signed up for a newly formed organization: the International Proof of Concept Centers Association (IPOCA). The Memorandum of Understanding signing ceremony was held in the city of Kazan on April 23, as part of the XV Russian Venture Fair.

IPOCA will connect a community of proof of concept centers with entrepreneurs, corporations, investors, government agencies and researchers, whose common mission is to accelerate innovation through international cooperation, networking and data-sharing techniques. The parties will set up a nonprofit organization that will serve as an international accelerator for technological innovation across Russia.

“We are one of the first universities to support Skoltech’s initiative”, said NEFU’s Pro-rector for Technical Direction and Information Technology, Aleksey Ermakov. “This cooperation is promising because it will enable us to work together on cutting-edge technologies in the field of IT, medicine, chemistry, construction, road and mining industries, and to develop international startup projects.”

Representatives of Skoltech’s Center for Entrepreneurship and Innovation (CEI) and various Russian universities got together for a first working meeting in Kazan on April 24. The next meeting is scheduled for June 2-3, as part of the Startup Village events at the Skolkovo Innovation Center. Potential global partners of IPOCA such as technology transfer experts and representatives of foreign universities are expected to participate in the talks.