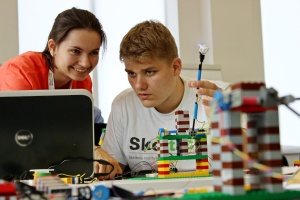 On a cloudy late summer day, a group of master’s students from 10 countries is busy figuring out what went right – or wrong – with a collection of colorful Lego-made robotic arms.

Gathered on the 4th floor of Skoltech’s new building, the students fiddle with software and hardware meant to control little propellers. Sometimes the small fans obey their young masters’ commands. Occasionally, rotors spin out of control.

A team of professors and teaching assistants watches over the action, fielding questions about electronics and mechanics. For more than a hundred new MSc students it is the first day of the first year at the university.

The postgrads kicked off their studies at Skoltech with an intensive Innovation Workshop, culminating with “Rapid Success Days”. During this final module students gain hands on experience of how a rapid prototyping approach can quickly turn big challenges into major successes. Its aim is to empower participants to identify and solve real–world problems, and to instill an entrepreneurial “can–do” attitude.

“The concept and experience here differ from a classic Russian university’s approach,” says Alexey Boyko, who graduated from Skoltech earlier this summer and is now helping to lead the workshops’ Electrical Engineering module. 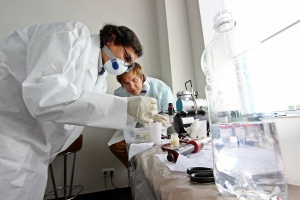 “As opposed to the classical way of doing things, when students work on gaining a 100% theoretical understanding before they even see any hardware, with Innovation Workshop you start with rough estimations, implement, see what happens and reiterate.

“Students debug prototypes from end to beginning until they find an error. It is all about a fresh way of thinking and implementing design and engineering.”

The workshop, led by the Center for Entrepreneurship and Innovation (CEI) in collaboration with a team of professors and instructors from the Massachusetts Institute of Technology (MIT), The Moscow State University and the Institute of Gene Biology was hosted by Skoltech for the second time.

The DNA of Public Discourse

Two floors below, Evgenyi Klimuk, a postdoc with the university’s Center for Data Intensive Biomedicine and Biotechnology, is overseeing a group of new Biomed students. They are poring over samples of sweet corn, extracting DNA from the staple food. Their mission is to determine whether canned corn marked as ‘natural’ by producers is, perhaps, genetically modified.

“We are connecting with a trendy and important discussion”, says Klimuk, “there is a real relationship between the lab and public policies which affect people’s lives. Our new students get to understand that”. 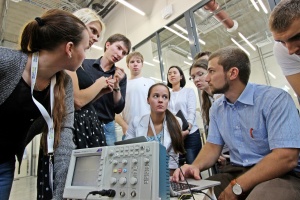 Back on the upper level, pushing open a door leading into a room serving as a kitchenette on regular days, you enter into a space enveloped by vapor and occupied by ghostly figures clad in white robes and protective goggles. These turn out to be, once more, students. Their mission is to produce layers of materials, transforming them from hydrophilic to water repellent.

Mikhail Kondratenko, the group’s instructor, sports a shock of red hair and an impressive beard. He has not only the appearance of a quintessential scientist, but also the attitude. Here is a young person whose whole being is geared up toward telling the world: I am meticulous, studious and quite proud of my science.

Kundratenko, an MSU research scientist collaborating with Skoltech’s Center for Electrochemical Energy Storage, explains that “our cooperation began with an idea. Dealing with fuel cells, you need to produce hydrophobic gas diffusion electrodes that will not be flooded by product water. My colleagues and I came up with an idea of using super-critical carbon dioxide for depositing hydrophobic polymers on textiles. Then we pitched it to Skoltech’s Innovation Program, and received its support. When we were done with the program we found commercial partners which allowed us to further experiment.”

So you made a full cycle – from applicants with Skoltech’s CEI to partners and instructors?

“I guess so. Today, at Innovation Workshop, we ask young students to create super hydrophobic surface. They use nano-particles for roughness and low surface energy chemicals. They need to mix components in a smart way to get a good result.”

Much like Skoltech, quips one of the new students, and returns to work.