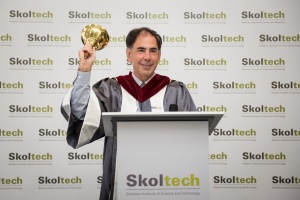 “We are dreaming big”, said Skoltech provost Keith Stevenson to a crowd of visibly excited students. “Which is why you will be tested tremendously and continuously.” Gathered for the opening of the academic year ceremony, and the launch of their innovation-focused program at Skoltech, the students listened, and smiled, and applauded.

‘Knowledge Day’ – or День Знаний in Russian – is a special day in Russia. All across the vast country, students and professors celebrate the new school year. Following local tradition, Skoltech president Ed Crawley rang a bell. It was the fourth time that the MIT professor led the ceremony, and the first time he was presiding over the festivities at Skoltech’s new building. 123 postgrads from 25 countries have begun their journey at Skoltech, the biggest and most diverse cohort of students in the university’s short history .

Crawley mentioned in his address the increasing competition between prospective students for spots with the Moscow based innovation-focused university. “This was the most competitive selection process we ever had”, he said.

“We received over ten applications for each position. Now we can focus again on our main responsibility: to learn and teach and discover.”

He reflected on the “enormous growth” of the institution in a relatively short space of time: The first bell-ringing ceremony was held at MIT in front of the inaugural intake of 20 or so students and a handful of professors. Two or three years from now, he said, the university will boast more than 100 professors, and about 600 students working and studying in state of the art labs and facilities in Skoltech’s new building.

Sergey Muratov, a master’s student with Skoltech’s interdisciplinary IT program, told the audience “that my main advice is to engage in as little self-questioning as possible – and start acting. You, the new students, are intelligent. You can make a change. Don’t waste your most productive years on doubts.”