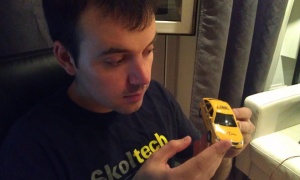 Andrii Omelianovych, co-founder and developer of Sharxi, an app which aims to reduce the costs of taxi rides in Moscow. Image courtesy of Sharxi (click to enlarge)

With Uber, Gett and Yandex.Taxi already well-known in Moscow, it may seem that there is little room for yet another taxi app, but two Skoltech graduates hope their taxi-sharing start-up, Sharxi, can find a niche.

The goal of Sharxi, developed by Boris Urman and Andrii Omelianovych (15’), is to significantly reduce the cost of a taxi ride by pairing up strangers headed in the same direction. A potential user opens the app, puts in their current location and where they are headed, submits the order, and waits for the system to find other passengers whose planned routes are similar.

Sharxi, which was launched on May 10 and has been downloaded 200 times so far, makes money by contracting with official taxi companies and taking a commission on every ride booked through the app.

The goal of Sharxi’s founders is to cut the price of an average cab ride in Moscow from 1,050 rubles ($16) to 500 rubles ($7.50), as well as to reduce the number of cars on Moscow’s crowded roads. Particularly, they focus on travelers looking for rides from the city’s three main airports to the town center.

Statistics from a report about the taxi market in Moscow shown on Russian TV’s Channel One in 2012 also put its value at about $1 billion, but an April report by the Civic Chamber estimated it far higher, at $16.5 billion.

The start-up faces some serious challenges. The idea of splitting a taxi ride via an app is not particularly new. For example, Uber already has a fare-splitting function called UberPool. Additionally, taxi users surveyed by The Moscow Times said that the price of individual rides was not so great as to encourage them to book a shared ride, citing other taxi apps that have reduced the cost of journeys and the desire to go directly to their destination without any detours as factors that would put them off.

But others said they would welcome the chance to save money by splitting the fare, and many of the users who have tried the app, which is currently in Beta testing, were positive about the cost of the service. 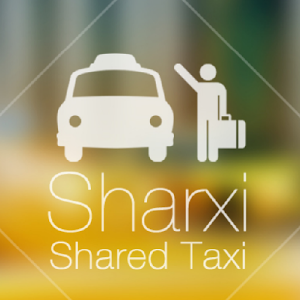 “I went from Vnukovo [Airport] to Aminyevskoye Shosse [in western Moscow] for 500 rubles ($7.50) — it was fun and fast!” a user who identified themselves as Vakhe wrote on the app’s website.

“Paid 500 rubles for a trip from Domodedovo [Airport] to Vyazemskaya Ulitsa [in western Moscow]. Great! Will definitely recommend to friends and family,” another test user, Lyuba, wrote.

Reviews of other aspects of the service were not so positive, however.

Among the main issues listed by users was the long wait to find another passenger.

“I was waiting for a co-passenger from Sheremetyevo [Airport] to Filyovsky Park [a district in western Moscow] and there was no one, so I had to take a single ride. Luckily I wasn’t in a hurry,” wrote user Ivan.

Another frequent issue mentioned in the reviews was passenger compatibility.

“We are thinking about adding a psychological survey for users, so passengers can be selected by temperament,” Omelianovych told The Moscow Times.

Sharxi is one of about 120 start-ups being developed at Skoltech and Skolkovo, a graduate research university that focuses on entrepreneurship and innovation and is located in west of Moscow.

One of the perks of being residents of Skolkovo, which was founded by former president and current Prime Minister Dmitry Medvedev as Russia’s ‘Silicon Valley’, is easy access to investors and officials.

Although Urman and Omelianovych’s app has been downloaded only 200 times, they have already presented the app to City Hall’s transport department.

“The state officials said our idea is good but haven’t offered us any deal yet,” Urman told The Moscow Times. “We will keep in touch with them.”

The stiff competition on the Moscow market has Sharxi’s creators looking to Asia to develop the app further.

Last month, Skolkovo provided Urman and Omelianovych with tickets to Hong Kong to participate in the Smart Green Cities entrepreneurship forum at Hong Kong University of Science and Technology.

“The Asian market is huge and dynamic in comparison with the European one, which is overloaded with services,” Omelianovych told The Moscow Times, adding that he had lived in Seoul, South Korea for six years and is comfortable with the Asian environment.

“Potentially we can boom in Asia, but for that we need internal partners.”

This story is a slightly modified version of an original story about Sharxi which appeared in The Moscow Times. We thank the author and the publication.