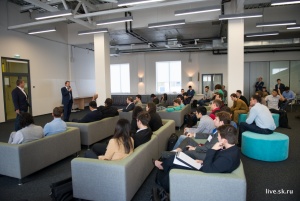 Arkady Dvorkovich, Deputy Prime-minister of the Russian Government and Chairman of Skoltech’s board of trustees and Alexander Chernov, Senior VP of Skolkovo Foundation, greeting SURF participants.

On the 7th of September, Stanford US-Russia Forum (SURF) was held at Skoltech. 53 participants – students from leading American and Russian universities met with each other for the first time, in order to collaborate in working groups. The groups were headed by experts and Skoltech professors in such spheres as technologies, innovation, education and business.

The last time a SURF conference took place at Skoltech was in the autumn of 2013. This time the participants of SURF conference were welcomed by Arkady Dvorkovich, Deputy Prime-minister of the Russian Government and Chairman of Skoltech’s board of trustees, Alexander Chernov, Senior VP of Skolkovo Foundation, Edward Crawley, Skoltech President and Founder and Alexei Sitnikov, Skoltech VP of Institutional and Resource Development. During his speech, Deputy Prime-minister Dvorkovich, pointed out that “the program would be successful and become one of the cornerstones of Russian-US collaboration in education”. 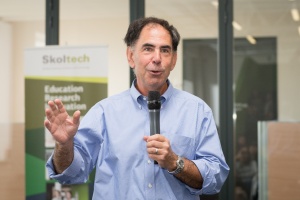 The Stanford U.S.-Russia Forum is an organization dedicated to bringing students at leading Russian and American universities together for research in spheres such as economics, technological entrepreneurship, governmental politics, business and many other fields. The students for this program are chosen every year and start working from the autumn conference in Moscow. Then they continue their collaborative researches during the next 8 months and are to present the projects at the spring conference in Stanford University.

Edward Crawley, Skoltech President and Founder, explained about the aims and activities of Skoltech, admitted the value and importance of students’ participation in such programs for their future work and collaboration, and emphasized that “the main point is to build bridges of knowledge and trust between people from different countries”. 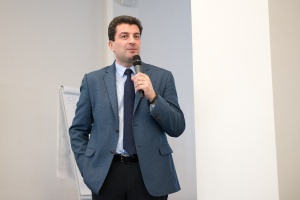 “This year we have working groups for biomedicine, energy technologies, aviation and space technologies as well as a special group forentrepreneurship and innovation. The ideas, which are to appear as a result of such collaboration, will have to become the basis for future research projects that will be presented at April’s conference in Stanford University next year”, said Alexei Sitnikov, Skoltech VP. 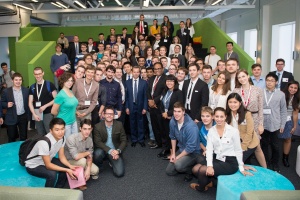 Deputy Prime-minister Dvorkovich with SURF students at Skoltech this week.