We are glad to invite you to a seminar by Dr. Denis Volkov, titled “Observing and understanding oceanic processes with satellite and in SITU measurements, and with ocean models”

The last 20+ years have seen a great progress in our ability to observe and ultimately understand oceanic processes and phenomena. This has happened due to (i) the advent of high-accuracy dedicated oceanographic satellite missions that measure sea level, gravity, sea surface temperature and salinity, surface winds etc., (ii) the implementation of nearly global ocean observing systems, such as the drifter and Argo programs, and of course (iii) advances in computing power and associated development of sophisticated ocean models. During the seminar I will provide an overview of my own most recent research on ocean dynamics. The primary focus will be on sea level changes in the regions that have the largest contribution to the global mean sea level rise with an emphasis on likely deep-ocean warming, and on the synoptic to interannual variability of sea level and circulation in the Arctic Ocean, in the North Atlantic, and in the Mediterranean and Black Seas. 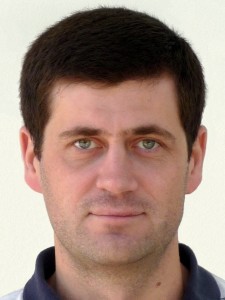 Dr. Denis Volkov is a physical oceanographer with research interests in space-borne observations of sea level and ocean circulation, analysis of ocean
dynamics using observations and general circulation models, high-latitude oceanic processes, and role of the ocean in climate variability.
Dr. Volkov obtained M.Sc. degree with honors from Saint-Petersburg State University (Russia) in 1999. From 2000 to 2004 he was employed by the Royal Netherlands Institute for Sea Research and he obtained Ph.D. from Utrecht University (Netherlands, 2004) under the supervision of Dr. Hendrik van Aken and Prof. Will de Rujiter. In 2005 – 2009 he was as a postdoctoral researcher, initially at C.L.S. Space Oceanography Division in Toulouse (France), and then at NASA Jet Propulsion Laboratory, California Institute of Technology (USA), under the supervision of Dr. Lee-Lueng Fu. In 2009-2013, Dr. Volkov was an Assistant Researcher at Joint Institute for Earth System Science and Engineering, University of California Los Angeles, affiliated to Jet Propulsion Laboratory. From 2013 to present, he has been working as an Associate Scientist at NOAA Atlantic Oceanographic and Meteorological Laboratory (Miami, USA). Dr. Volkov is a member of the NASA Ocean Surface Topography Science Team and he is the PI and Co-PI on several NASA-sponsored projects in physical oceanography.