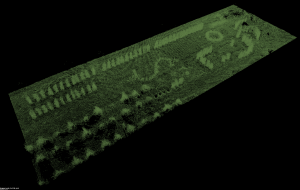 From its beginning, one of Skoltech’s guiding principles was to interface with industrial commercialization and venture opportunities as they develop at Skolkovo and elsewhere. Last week Skoltech has realized this principle, as it has signed its first transfer of technology license with the ‘Quantum Systems’ company. The license includes a technology that will allow the company’s novel unmanned vehicles and robots to recognize the configuration of a surrounding area and to directly control motors and other parts of the robots, thus making them move in a needed direction.

The technology was developed in the computer vision group at Skoltech. The project was led by Victor Lempitsky, who is heading the group, and the main developers of the technology were Dmitry Ulyanov, who is now a PhD student at Skoltech, and Alexandra Fenster. 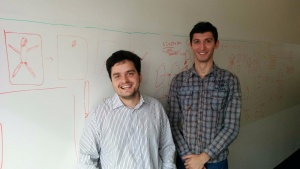 “Very happy to be the first group to accomplish such transfer”, Victor Lempitsky (left) and Dmitry Ulyanov.

“We are very happy to be the first group to accomplish such transfer, and we plan to participate in future transfers”, says Lempitsky, “This project was an example of combining research in an interesting and “hot” direction (robot navigation based on a 3D sensor data) with a viable commercial need of our partner. The success of the project was facilitated by the support from Skoltech Knowledge Transfer Office.”

In the Knowledge Transfer Office (KTO) the spirit was high: “It is a really important Skoltech’s milestone on its way to becoming a university aiming at bringing real social and economic impact on society”, said Sergey Ulyakhin, licensing and technology transfer manager at KTO, “I’m happy to be a part of this history, and a part of the great Skoltech’s team shaping this history. We all should continue providing our researchers with our best support whenever it is needed in their inventive and innovative activities, and this will certainly yield a lot of good outcomes in the future.”

The project leader from ‘Quantum Systems’, Dmitry Suvorov, said: “The ‘Quantum Systems’ company sparked an idea about the new method to define the position of mobile robots in space. Members of the Skoltech ‘Computer Vision’ group, led by Professor Victor Lempitsky, elaborated a successful approach to realize this idea. Joint new solutions will enable us to use this technology in practice applied to our new gadgets.”

We are proud of the Skoltech staff that managed to set this important landmark and we hope to have many more agreements in the near and far future.