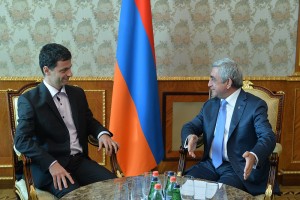 President of Armenia, Serzh Sargsyan (right), and Prof. Artem Oganov during their meeting.

Skoltech Professor Artem Oganov visited Armenia yesterday and met with the republic’s president, Serzh Sargsyan. Prof. Oganov was there at the invitation of governing body of the Assistance Program for the Young Scientists, which is operating under the auspices of the President of the Republic.

Prior to his meeting with the president, Oganov, who is of Armenian descent, held an open class at the Physics Department of the Yerevan State University and later visited at Armenia’s National Academy of Sciences. The young scientists were privileged to get a lecture on modern methods in materials by design from one of the founders of modern crystallography. Oganov has created the algorithm for the crystal structure predictor, the USPEX program, which possesses the highest efficiency for the crystal structure prediction and is being used by more than 2500 scientists. Materials by design and many of the structure prediction computer programs are used in pharmacology, biotechnologies, software engineering, and other areas.

“When I was invited to Armenia, the invitation was just to give a lecture for young scientists at Yerevan University.”, said Oganov after the visit, “I immediately agreed, because I have relatives there, I love Armenia, and I know that there are many excellent scientists there. Also, I know and greatly respect the people who invited me – in particular, Hovakim Zakaryan, a young biologist, who does research, teaches at the University, gives popular science lectures, and on top of it all also teaches at school. I admire such people.
When I arrived, it turned out that I had invitations to meet the President of Armenia, Serzh Sargsyan, and the President of the Academy of Sciences, Radik Martirosyan. Both meetings were very interesting and inspiring. The meeting with President Sargsyan lasted an hour. I was struck with his warmness and informality, but it was clear that he cares for the country, and recognizes the importance of science”.

In his meeting with the president, Oganov noted that during his lecture he became aware that there were many goal-oriented, well-educated young people who have excellent prospects. He expressed readiness within the scope of his abilities to assist these young people, and discussed with President Sargsyan the probable avenues of such assistance, which may include organization of the educational programs in his laboratories in the Russian Federation, the United States, China, summer schools in Armenia, etc.

Photos: The official site of the President of Armenia