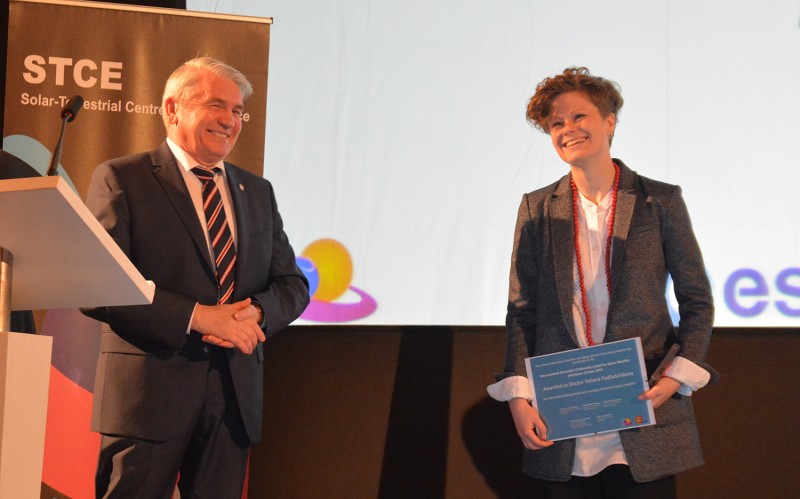 Alexander Razumov, the director of the Mission of Rossotrudnichestvo in Belgium awarding Tatiana Podladchikova with The International Alexander Chizhevsky medal for Space Weather and Space Climate. photo: Olivier Boulvin

The International Alexander Chizhevsky medal for Space Weather and Space Climate was awarded to Tatiana Podladchikova in a ceremony that was held during the 12th European Space Weather Week in Ostend, Belgium. This award is given to a young researcher for major contributions to space weather research and/or services. According to the prize criteria, the candidate for the medal “must have taken unexplored ways, potentially at risk, to reach a successful achievement”.

“This is great honor and encouragement for me” said Podladchikova, who got her PhD in technical sciences in 2008. She works in the Skoltech Space Research Center from its foundation in 2013. This is not the first time she participates in the European Space Weather Week – in 2009 she got an award for the best poster on the meeting. Podladchikova is involved in processing of space data. She participates in research devoted to space weather forecasting as a method for preventing and mitigating the cosmic accidents and their consequences.

The work that awarded her with today’s prize is concentrated in the following aspects: The development of breakthrough approaches in estimation theory to extract a useful signal from noisy experimental data, control and forecasting for broad range of space applications; The forecasting of solar activity and geomagnetic storms, reconstruction of Earth’s magnetosphere, study of active events on Sun to mitigate hazards of space accidents and their consequences; The development of techniques to predict the trajectory of moving objects (ships, planes, satellites), in particular Kalman filter, that leads to progress in interdisciplinary applications.

The medal was awarded to Podladchikova by Alexander Razumov, the director of the Mission of Rossotrudnichestvo in Belgium and the director of the Russian cultural and scientific center in Brussels.
“This is great honor and joy to be here with you, great scientists and experts on space weather and climate, and to receive this esteemed award”, Podladchikova said in her speech, in which she described her academic and professional way to this day, working at Skoltech: “The Skolkovo Institute of Science and Technology (Skoltech), a new and growing university in Moscow has a unique and originative communication atmosphere of like-minded people. This was the key to the consolidation of efforts of various specialists for the successful model development to reconstruct the dynamics of Earth’s radiation belts”.

Commemorative coin of the Russian Federation, 1997, dedicated to Chizhevsky.

Alexander Chizhevsky (born: 1897) was an outstanding interdisciplinary scientist, a biophysicist who founded ‘heliobiology’ which is the study of the effect of the sun on biology and the ‘aero-ionization’ which is the study of the effects of the ionization of air on biological entities. He was also noted for his work in ‘cosmobiology’, biological rhythms and hematology. He may be most notable for his use of historical research and techniques to link the 11 year solar cycle with the Earth’s climate and the human activity. Chizhevsky is recognized as the founder of the Sun-Earth research, having proved that solar activity has an effect on many terrestrial phenomena.

He died in Moscow in 1964 and is buried in Pyatnickoe cemetery in Moscow with a headstone featuring an engraved carving representing the sun. The Chizhevsky Science Memorial Cultural Center opened in Kaluga, Russia in 2000 in the home where Chizhevsky lived and worked for nearly 15 years.

Tatiana, we congratulate you for your achievement and we’re very proud of you!